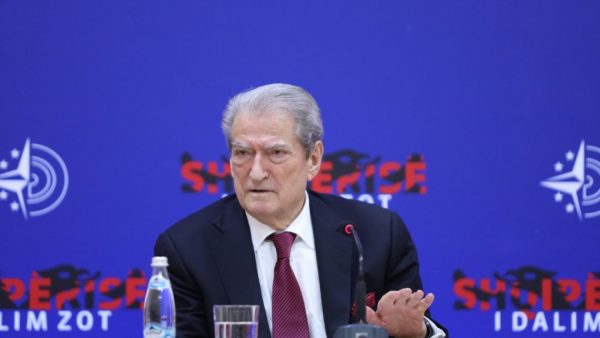 Sali Berisha, the head of the Democratic Party, remarked on the case of the FBI officer who is being investigated in the USA, during a meeting of the Parliamentary Group, claiming that it proves that the Albanian mafia is the most dangerous in the world.

He went on to suggest that Rama, the Prime Minister of a NATO member nation, bribes the senior FBI official illegally.

“Edi Rama has been deceitful and antagonistic to our primary strategic partner. By exploiting, treating as an ace, and covertly a man who never deserved to be in his position.

The first claim against Charles McGonigal is that he was tasked with managing Oleg Vladimirovya Deripaska, a man close to Putin who actually became his asset.

The most serious offense is when the prime minister of a NATO member country uses illicit methods to bribe this authority.

What does this tragic incident reveal about Albania and Albanians? This demonstrates why the Albanian mafia is the most dangerous in the free world.

That the mafia’s tentacles, Neza, Ducka, and Rama, are capable of carrying out any nefarious enterprise. Undermining not only the United States’ but also NATO’s and the free world’s essential security interests.”

Meta demands Rama’s resignation because “he worked to destroy Albanians’ love for America.”

In a statement to the media on Wednesday, the Freedom Party’s leader, Ilir Meta, accused Rama of attempting to use his relationships and communication with high-level US officials through corruption to attack the opposition, undermine the rule of law, and secure corrupt profits for himself and his associates.

“Albanian and international opinion is familiar with the file of the former high officer of the FBI, McGonigal, and with his documented contacts with the Prime Minister of Albania, Edi Rama,” Meta said.

The file of former FBI official McGonigal and his confirmed connections with Albanian Prime Minister Edi Rama is well known in Albanian and international circles.

This is the most significant crime in the history of Albanian pluralism in which the American Prosecutor’s Office mentions the Prime Minister of Albania as being complicit in acts of corruption against US officials.

Edi Rama has been clearly named as a participant in corrupt conduct and illegal influence in the “McGonigal Affair” together with his accomplices.

Edi Rama has attempted to use ties and communication with high-level US officials to attack the opposition, undermine the rule of law, and obtain corrupt riches for himself and his cronies through corruption.

Edi Rama has been universally confirmed to have used his position to hold power in an illegal and mafia-like way, financed by the money of corruption.

His manipulation and use of a high-ranking US official served the sole purpose of ensuring investments through dirty Russian money by introducing them as atavisms into the Albanian economy and positioning Albania not at the forefront of the fight against corruption and trafficking, but as a result of Edi Rama’s support and use of them.

The concealing of McGonigal’s contacts with Edi Rama, as well as the public involvement of his accomplice and partner Rosini, provide strong evidence that Edi Rama is nothing more than a gangster in the Prime Minister’s office.

It is apparent that Edi Rama’s relations with the United States of America have never been and continue to be relations of affairs.

Edi Rama is the individual who has purposefully and with a well-defined strategy undermined these links, sought to shake them, and tried to weaken Albanians’ respect and love for the United States of America in order to forward his already demonstrated pro-Russian goals.

Edi Rama’s resignation was required because the level of incrimination, compromise, and corruption in the position of prime minister is disgraceful and inconceivable.

In the face of such alarming data that clearly implicate the Prime Minister, Albanian justice should have acted quickly.

The Albanian justice must contact extensively and closely with the American justice in order to resolve this entire state matter, which has already crossed Albanian borders, and to investigate and bring the Prime Minister before the Justice.

The arrest of the FBI official, Gjiknuri: The allegations have little to do with Rama, and the PD will shift attention away from “January 21.”

The Socialists have decided to support Edi Rama, who is facing public charges for his contacts and meetings with former FBI official Charles McGonigal, who has been detained in the United States. From the party’s headquarters, the general secretary, Damian Gjiknuri, saw popular attitudes as a smokescreen designed to deflect attention away from another event.

“The meetings provide no evidence of crimes committed by Albanian authorities or their involvement. This is a smokescreen created up by the Albanian opposition to conceal these events and fresh information concerning January 21 “Gjiknuri said. “According to what we’ve read in the American justice records, they say it all. There is no bigger crime than the murder of innocent citizens. I believe that American justice has clarified the situation. First, the senior FBI official was a significant figure who is accused of being involved in the payments of a Russian tycoon and has no ties to Albania. Because of his contacts, he violated professional ethics. The matter of Nick Muzin has been brought before American courts, where it is stated that DP benefitted from Russian funds, before this fact was mentioned in US Department of State reports. The issue has nothing to do with the meetings he held in other countries “Gjiknuri remarked.

The former FBI official is accused of favoring a Russian tycoon who happens to be a shareholder in an international corporation operating in Albania. “The competitions in Albania are all public and it would be crazy, outrageous that a major shark of worldwide finance that even impacts the USA has interests in generating money with strawberries in Divjaka!”.

The international media has linked the talks between Rama and McGonigal to the investigations undertaken by the American judiciary investigating the DP lobbying file in the United States. However, for the SP, Russian funding to the DP is a separate issue from the McGonigal case. “You can’t blame the Prime Minister of Albania or other officials who met with a senior FBI official in this case. But let us not mistake Nick Muzin’s track record with other things under investigation.”

Despite being questioned extensively about the investigations begun in the United States, Gjiknuri appeared in front of the cameras to announce the filing of another complaint in SPAK on behalf of the SP for the January 21 case. “The new charge is murder under other qualifying conditions, and it is addressed at former Prime Minister Berisha, former Minister of Interior Basha, and former National Guard Commander Ndrea Prendi.”

Bardhi files lawsuit against Rama at Special Prosecution: He paid the former FBI official to fabricate the tale with Russian rubles

The American court’s investigation into Edi Rama’s contacts with the former FBI official who was imprisoned as a Russian collaborator prompted Gazment Bardhi from the Democratic Party to denounce Edi Rama to SPAK, the Special Prosecution Against Corruption.

“Today, I officially requested that the SPAK begin investigations into a criminal organization run by Albanian Prime Minister Edi Rama. Edi Rama paid his friend McGonigal a total of $225,000 to manufacture the story of lobbying with Russian money for DP in the United States, according to American justice. SPAK does not have much work to perform in order to solve this criminal case. It is sufficient to request the file in the United States “, writes Bardhi in his Facebook post.

Rama: An official has been charged in America, and the “trial” against me has begun in Albania.

Prime Minister Edi Rama reacted after the chairman of the Democratic Party, Sali Berisha, stated that the American court has ordered an investigation into the former arrested high officer of the FBI, Charles McGonigal, and his links with the head of our government and his advisors.

“In America, an FBI official is accused of things that have nothing to do with me (if they did, the investigation of those who do not manipulate evidence or spare the guilty would have brought them out), and the trial against me begins in Albania in the Big Brother of politics, channels, and portals! I’m used to it, but I’ve recently chosen not to deal with the removal of every stone that the characters of this worthless Big Brother toss into the river every day! Fewer words, but more work and interaction with people who have job to do or problems to solve. Those who don’t know how to do anything must be understood, same as those who refuse to believe anything other than what they absolutely must believe “Rama says on Twitter.

The case of the FBI counterintelligence chief, Charles McGonigal

Former New York FBI counterintelligence chief Charles McGonigal was indicted on two felony charges on Monday for allegedly working with a US-sanctioned Russian oligarch after his retirement and concealing hundreds of thousands of dollars in payments from an Albanian services official while he was still in office.

According to CNN, McGonigal, who worked with the FBI for 22 years before leaving in 2018, was arrested last Saturday at John F. Kennedy International Airport while returning from a trip abroad. He has been released on bond since Saturday and has been ordered to forfeit his passport and refrain from traveling internationally.

During a court hearing in New York, he disputed the charges through his lawyer. He has pled not guilty to accusations of US sanctions violations, conspiracy, and money laundering. According to the accusation, he collaborated with Russian businessman Oleg Deripaska in 2021, despite the fact that the latter was convicted of meddling in the 2016 US presidential election by the US.

McGonigal is accused in Washington of concealing his links with a person who worked for the Albanian Intelligence Service decades ago, as well as receiving payments totaling $225,000. According to prosecutors, as an FBI employee, McGonigal was supposed to disclose overseas travel and contact with foreign people, which he did not do.

McGonigal was granted release by a New York court on Monday after two persons provided $500,000 bond. Their identities have not been revealed.

Except for travels to court in Washington, McGonigal is now compelled to declare all trips outside of New York state. McGonigal’s counsel, Seth DuCharme, told the court that his business requires him to travel internationally and that he may seek changes to his bail conditions at a later date.

Prosecutors allege that during McGonigal’s journeys to Albania, Austria, and Germany, he failed to declare meetings with the prime minister of Albania, a politician from Kosovo, and others on documents filed to government officials.

In a meeting, prosecutors believe that McGonigal instructed the Albanian prime minister to “be careful in issuing licenses for oil extraction in Albania to shell firms for Russian ones”. The former Albanian service official who provided the 225 thousand dollars had a financial stake in the government’s judgment on these contracts. One of the payments, $80,000, was given in cash to McGonigal when he was standing outside a restaurant in New York.

According to the lawsuit, which CNN obtained, the FBI initiated investigations into foreign lobbying of American citizens under McGonigal’s supervision, based on information obtained from the former Albanian service employee.