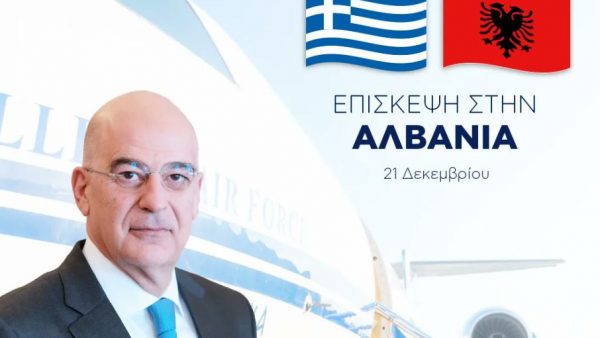 A day before the Greek Prime Minister, Kyriakos Mitsotakis, visits our nation, Greece’s Foreign Minister, Nikos Dendias, will undertake an official visit to Albania, where he will meet with his Albanian counterpart. Olta Xhaçka, followed by a working lunch with Prime Minister Rama.

The Greek ambassador stated on the social network “Twitter” that the conversations will focus on the trajectory of bilateral ties, current international and regional developments (such as Russia’s occupation of Ukraine), developments in the Eastern Mediterranean, and concerns relating to the Western Balkans’ European outlook.

“During my stay in Tirana, I will also visit the Arsakeio Greek-Albanian College, as well as the Albanian-American school “Protagonides,” which works under the Autocephalous Orthodox Church of Albania’s “Spirit of Love” foundation,” Dendias said of his plans for tomorrow in our nation.

The Greek Prime Minister, Kiriakos Mitsotakis, will return to Albania on December 22 in the morning to resume meetings that did not take place on December 6. The leader of the neighboring country’s government will not be in the Albanian capital, but will instead visit Himara, Finiq, and Dropull in the country’s south, areas with population from the Greek minority.