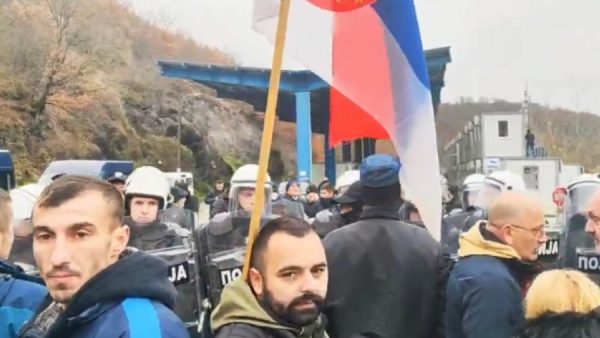 Dozens f oprotesters from the so-called group “Serbian patriots from Serbia, Montenegro and the Republic of Serbia” gathered in Jarinje at midday on Sunday December 18th, but Serbian police prevented them from entering Kosovo.

Many of the demonstrators are hiding their faces behind masks as they carry Serbian flags and numerous placards, the most notable of which reads, “Never a border, Kosovo is Serbia.”

There are a lot of Serbian journalists in Jarinje, but the walls have prevented Kosovo media, especially Serbian-language media, from traveling there.

The individuals who have already arrived in Jarinje are awaiting President Aleksandar Vucic’s directive to the Serbian police allowing them to cross the border into Kosovo.

The gathering of masked Serbs in Jarinje, the police intervene. American KFOR personnel may be seen supporting Kosovo.

The majority of the Serbs in Jarinje, on Serbian soil, have already left, but scores of young people are still around, pleading with the police to let them cross the border into Kosovo.

To assist their colleagues, more police officers from Serbia’s special unit have arrived. As a show of solidarity for the local Serbs who have built barricades in the north of Kosovo, some Serbian protestors battled with Serbian police forces close to the border crossing point between Kosovo and Serbia, Jarinje, on the Serbian side of the border.