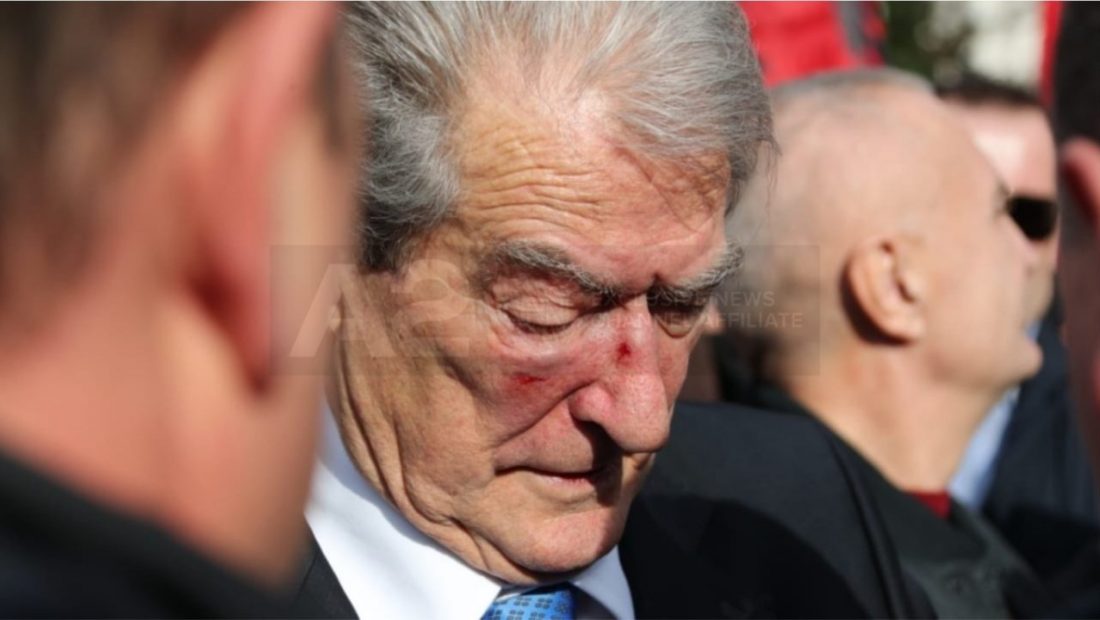 The Albanian opposition, led by the Democratic Party, staged a protest on the Boulevard “Martyrs of the Nation” prior to the start of the EU-Western Balkans Summit in Tirana. The demonstrators are hoisting a banner with the slogan “Europe, throw us a life jacket”. A group of young individuals are wearing t-shirts with the same wording printed on them.

At the beginning of the opposition protest, a severe incident took place. Sali Berisha, the Democratic Party’s leader, was punched by a person in the crowd. The assailant was quickly held by Berisha’s security and democratic supporters.

The protest went on normally, with Berisha even giving a statement a few minutes later, declaring that “nothing can beat us.”

According to the initial information, the person is suspected of having mental health issues. He has been identified as Gert Shehu, 31, a Tirana resident originally from Tepelena.

Shehu was taken to the Trauma hospital after being hit by Berisha’s bodyguards. According to A2 CNN sources, he was arrested there by police officials.

It is reported that he raced into the crowd and struck numerous media operators to clear the path for him before striking the DP chairman in the face.

Kelliçi, the DP candidate for Tirana Municipality elections, was the first to respond, adding that he hoped that Rama wasn’t hiding behind the attack against Berisha.

“I hope today’s incident was not caused by you or your levers.” After the incident with the democratic leader during the protest, the DP candidate for Tirana Municipality Belind Kelliçi cautioned Prime Minister Edi Rama, adding that they would investigate the case thoroughly.

The Freedom Party’s leader, Ilir Meta, has accused Prime Minister Edi Rama of being behind the incident during the protest in which democratic leader Sali Berisha was struck in the face by a citizen. He urged protesters to undertake organized actions to show Edi Rama his place. Today’s event, he says, is only fit for a devious and corrupt prime minister.

During his speech, Berisha sent a message to European Union officials, emphasizing that the country will not sacrifice democracy for stability.

“Narcoeuros are used for any crime here, including the one they planned today. Albania has achieved perfect monism on this basis. Even now, Edi Rama wields more control than the last communist ruler, Jiang Zemin, in 1991. In terms of law enforcement, Albania is ranked 54 places higher than Kosovo, but also four places lower than the socialist republic of communist Vietnam”, Berisha stated.

Berisha asked that the aggressor be released and said that the actual culprit is Prime Minister Edi Rama.

“Let us tell the police: free the unfortunate man! He should be released since he is a wretch who has sold himself. Edi Rama is the only architect of this attack. The true author is seated at the summit as the Balkans’ and Europe’s top criminal “Berisha stated.

Lulzim Basha, the former head of the Democratic Party, reacted by expressing solidarity with the party’s political “opponent,” with whom he had to be facing months ago.

“I strongly condemn the physical assault on Mr. Berisha. This occurrence must be thoroughly investigated and clarified. Violence is never a solution “, he wrote on Twitter.

The American embassy has reacted to the attack on the Democratic Party leader, Sali Berisha:

“The physical attack on a member of Parliament today shocked us, and we expect the authorities to thoroughly examine the matter. No one should be attacked for exercising their legal right to free expression”.

According to a press release, the Albanian Prime Minister, Edi Rama, condemns the unreasonable and abhorrent act of violence against the organizer and leader of today’s protest without reservation.

“Edi Rama, Albania’s Prime Minister, strongly condemns the unreasonable and intolerable act of violence against the organizer and leader of today’s protest! Violence has never been, is not now, and will never be a method of dealing with any issue or concern, and anyone who employs it will face the full weight of the law.”

“President Begaj regards these acts as reprehensible and contrary to democratic norms and the growth of peaceful protests. The Head of State invites the authorities to investigate this case of violence as soon as possible and to clarify the dynamics of the event. Freedom of expression and peaceful assembly are fundamental rights that must be recognized, secured, and safeguarded “, the Presidency said in a statement.