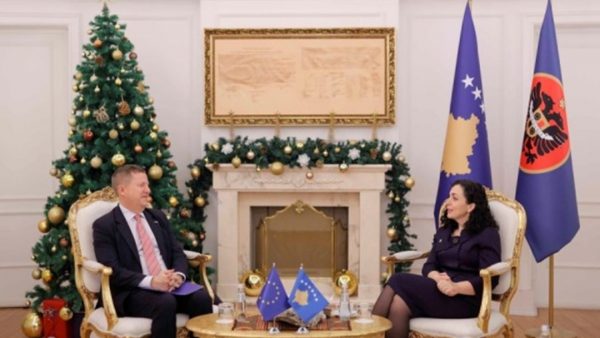 Kosovo will be represented at the EU-Western Balkans Summit by President Vjosa Osmani. Osmani received the invitation from the EU ambassador in Kosovo, Tomá Szunyog.

According to the Presidency, the discussion was convened to improve coordination on the eve of the EU-Western Balkans Summit, which will be place in Tirana on December 6.

The gathering praised the fact that this Summit would be held specifically in the Western Balkans for the first time, indicating the EU countries’ readiness for a greater commitment to collaboration and partnership with the countries of the region.

According to the statement, the parties also addressed the declaration, which is likely to be endorsed by Summit attendees.

The Presidency of Kosovo made the following announcement: “On this occasion, Ambassador Szunyog handed over the actual copy of the invitation from the President of the European Council, Charles Michel to President Osmani, who will represent Kosovo at the EU – Western Balkans Summit,”