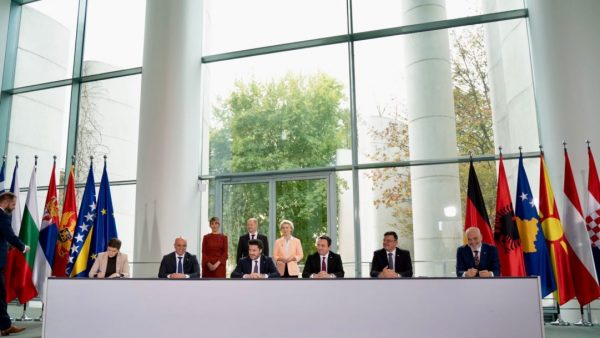 During his visit to Berlin, Kosovo Prime Minister Albin Kurti met with Josep Borrell, the EU’s high representative for foreign affairs and security policies, and Miroslav Lajçak, the EU’s special envoy for dialogue.

According to an announcement by the prime minister’s office, they discussed the final agreement with Serbia with mutual recognition, the decision on license plates, and energy challenges. Kurti revoked his intention to replace the old Serbian license plates in order to safeguard the country’s peace and security.

He further asked that anyone who damages or burns vehicles with RKS license plates in Kosovo’s north be penalized. In keeping with this, Borrell reacted by criticizing vehicle burning. “I urge everyone to exercise restraint,” said the senior EU official.

“Kosovo must also move freely in the EU”, Rama: We had the Berlin Process accords inside the context of the Open Balkans, and it was critical that everyone was involved.

Prime Minister Edi Rama applauded the Berlin Process agreements, which he deemed crucial, despite the fact that they had previously been accepted by the Open Balkans governments.

“What we signed today is critical. I cannot emphasize enough that these were three agreements that we had been eagerly awaiting for two or three years, and they were stopped. The chancellor and his colleagues worked tirelessly to persuade everyone to sign them, which we already had as part of the Open Balkans initiative. It is critical that everyone immediately participates in this. “It certainly appears strange to the people of Kosovo that, while they agreed to move freely with identity cards, they cannot move freely like others in the region when it comes to going to EU countries,” Rama said at a press conference with German Chancellor Olaf Scholz and European Commission President Ursula von der Leyen.

The Prime Minister requested additional assistance in the sphere of cyber security. “I hope to see development in the digital area, because energy, connectivity, and the digital component were the three pillars of the Berlin Process from the start.”

Edita Tahiri, a former Kosovo negotiator in the conversation with Serbia, stated that with the signing of the first three agreements under the Berlin Process, the Open Balkans project, an endeavor launched by Albania, Serbia, and North Macedonia, comes to an end.

“Vucic did not attend the Berlin Process Meeting today for two reasons: first, an open military threat to security and stability has no place in a summit aimed at achieving long-term peace and stability in the Balkans; second, the Serbian hegemonic project “Open Balkan” came to an end today. Meanwhile, the Berlin Process of six Western Balkan countries eventually prevails. This destructive Serbian-Russian initiative is already over for the organizers of the “Open Balkans,” which developed a bizarre duo “Rama-Vucic,” Tahiri commented on her Facebook page.

Brnabic criticizes the EU: It is allowing Kurt to ignore the agreements reached in Brussels

Previously, the Prime Ministers of the Western Balkans countries signed three agreements under the context of the “Berlin Process” Summit, which was agreed on October 21 by the preliminary ministerial, in which the countries’ Foreign Ministers participated.\

Ana Brnabic, Serbia’s Prime Minister, criticized the European Union for accepting the conduct of Kosovo’s Prime Minister, Albin Kurti, and not forcing him to fulfill earlier agreements established in Brussels.

Following the Berlin Process conference on November 3, Brnabic told reporters that he met with the EU’s head of diplomacy, Josep Borrell, and the bloc’s special envoy for the Kosovo-Serbia dialogue, Miroslav Lajcak, about the problem of re-registration of cars in Kosovo with Serbian license plates.

“Kurti violated all license plate agreements, including those signed in 2011 and 2016, as well as the one reached in September 2021, and unilaterally removed from use license plates with neutral status [KS].” They say they agree that KS license plates should exist, but they also say they can’t do anything about it, which is awful for me,” Brnabic added.

Brnabic stated during a working lunch that he “wanted the EU officials to recognize” that the European Union’s legitimacy is being questioned because Brussels is unable to secure the execution of agreements struck since 2013.

There is no consensus on license plates. Kurti does not desire peace and will not accept compromise, according to Brnabic.

Brnabic stated that while in Berlin, he spoke with German Chancellor Olaf Scholz “about many topics,” but not on the Franco-German initiative. Even Kosovo’s prime minister, Albin Kurti, has declined to comment on the Franco-German initiative, claiming that “it is respect for the mediator to maintain the confidentiality of concrete conversations.  The German leader, Olaf Scholz, stated that a proposal from Berlin and Paris for Kosovo and Serbia exists, which, according to Kosovo media, envisages recognition by the five EU countries who have not yet done so, but not by Serbia.

While peace in the Balkans was being discussed in Berlin, Serbia’s President appeared today among soldiers and weapons. Aleksandr Vucic attended the armed forces training “Maneuvers 2022,” and he did not spare the language of warnings and threats. In response to Ministry of Defense claims of a downed drone near a military installation in Raska, he stated that he will not allow Serbian barracks to be spied on. According to Vucic, this is not the first time that “such an aggression against a sovereign country” has occurred. He was also concerned about NATO’s recent operations.

“NATO’s Skylark drones circled Brnjak and Jarinja all day yesterday.  They were between 200 and 500 meters from the administrative line. NATO followed all of the protocols in place. We saw them without incident, but we do not have the authority to depose them in accordance with Resolution 1244 and the Kumanovo Agreement,” Vucic stated.

When journalists inquired if the downed drone was a wedding drone, Vucic responded that he does not allow insults to military troops. He also stated that the aircraft’s provenance will be exposed very soon. Vucic also discussed the latest developments in Kosovo’s decision to discontinue the use of outdated Serbian registration plates.

“I am very concerned about Borrel’s and other people’s words; I am horrified by their statements; I will wait for Lajcak’s visit; it is possible that I will cancel some of my key visits planned to see overseas because of the situation in the nation,” he continued.

The Serbian president went on to add that he will make painful decisions in the coming days and that the country is in for a “hellish winter.” cVuci, among other things, complimented the soldiers on the “Maneuvers 2022” exercise, in which reservists also participated, while also declaring that 294 major combat devices had been added to the military armory and promising that 850 more would be added in the next three years. This drill included the employment of several weapons, including Russia’s “Kornet” missile system.