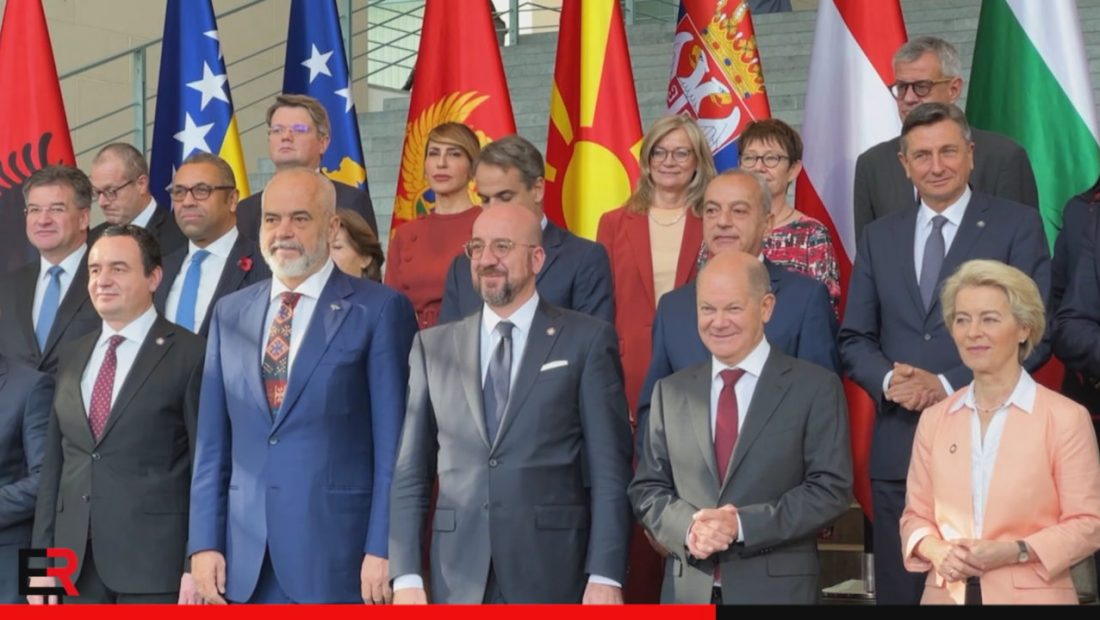 As the host of the Berlin Process Summit, Chancellor Scholz began his statement by promising that the six Western Balkan countries deserve to join the European family, and that doing so is in the best interests of the area.

“The six Balkan countries are part of free Europe, and their accession to the EU is in our best interests.” “It is our responsibility to make the promise of a European future for the Western Balkans a reality, and this has brought us here today,” Scholz added.

During his speech, the German chancellor also addressed the talks between Kosovo and Serbia, emphasizing that the process of mending relations between the two nations should be accelerated.

“It is time to transcend the regional problems that have split and continue to divide you on your European trip.” To achieve results, the process of normalization between Kosovo and Serbia must be hastened, according to Scholz.

“You are taking significant steps today by signing three crucial agreements.  The common regional market will improve the region’s economy and investment. The accords will let your nationals to travel solely with their identity cards, and we will ensure that students from Sarajevo finish their studies in Belgrade, or architects from Tirana find work in Skopje,” Scholz said.

The revival of the Berlin process was signified by three agreements signed earlier by the Open Balkan trio, which allow only mobility within the region with identity cards, recognition of higher education credentials, and qualification of doctors, dentists, and architects. Now, with the approval of all six Western Balkan countries.
“We and other Berlin Process participants will continue to support Western Balkan countries.”

The summit shown a willingness to collaborate, and as a result, Germany will continue to support this process. “Even the EU supports this procedure,” Scholz remarked.

Edi Rama did not leave out the fact that these agreements between Serbia and North Macedonia have already begun to be implemented: “It is good news that today we have three signed agreements that we signed previously in the Open Balkans.” It is critical that all of the region’s countries are included today.”

Ursula von der Leyen, the chair of the European Commission, was more explicit, speaking with statistics about the EU’s financial support for the region: “For the Western Balkans, 1 billion euros in grants will be made available, a budget which will be divided into two phases.” The first 500 million euros will be awarded to the region in January of next year, with the remaining half going toward energy infrastructure investments.”

The Western Balkans Prime Ministers have signed three agreements as part of the “Berlin Process” Summit, which was agreed on October 21 by a preparatory ministerial meeting attended by the countries’ Foreign Ministers.

The Berlin Process was founded in 2014 as a forum for Western Balkans countries (Albania, Bosnia and Herzegovina, Kosovo, Montenegro, North Macedonia, and Serbia) to expedite tighter alignment with the EU and deepen integration and regional cooperation, as a vital factor for economic development and peace in the region.

The German Chancellor and the Albanian Prime Minister both issued statements from Berlin urging Kosovo and Serbia to adopt the German-French plan as a viable solution.

” We are working hard to make this happen.” We are very actively participating in the talks between Kosovo and Serbia to find a solution, and I hope that very soon we will arrive at a process where all sides work together to achieve great results, but it will take a lot of effort,” Scholz added.

“The new German-French initiative for talks between Serbia and Kosovo is a really wonderful opportunity not just for the two countries, but also for the entire region and Europe,” Edi Rama stated. I sincerely hope that both parties take this offer carefully, keeping regional security in mind.”

The Berlin Process will have its next meeting in Tirana in December. Edi Rama, in his capacity as host, urged everyone to go beyond political declarations and produce actual results.

Prime Minister Edi Rama applauded the Berlin Process agreements, which he deemed crucial, despite the fact that they had previously been accepted by the Open Balkans governments.

“What we signed today is critical. I can’t underline enough how frustrating it was to have three agreements that we had been looking forward to for two or three years denied. The chancellor and his colleagues worked hard to persuade everyone to sign them, which we already had under the Open Balkans framework. It is critical that everyone immediately participates in this. “It certainly appears strange to the people of Kosovo that, while they agreed to move freely with identity cards, they cannot move freely like others in the region when it comes to going to EU countries,” Rama said at a press conference with German Chancellor Olaf Scholz and European Commission President Ursula von der Leyen.

The Prime Minister requested additional assistance in the sphere of cyber security. “I hope to see development in the digital area, because energy, connectivity, and the digital component were the three pillars of the Berlin Process from the start.”