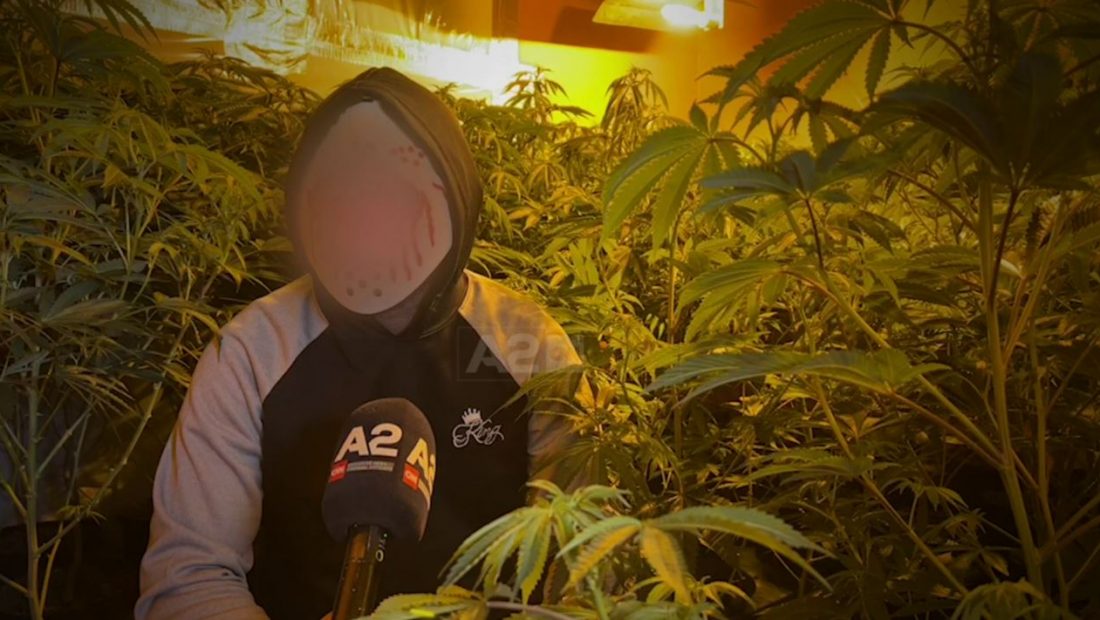 “Weed houses” have entered the daily vocabulary of Tirana, not only of politicians but also of young Albanians. A2 CNN traveled to England to document the difficulties and struggles of young Albanians who wind up in such unlawful employment in search of a better future.

It is true that young people leave Albania, but it is also true that their biggest desire in recent years has been to relocate to England. Not as a destination with outstanding professional or academic potential, but as a place to become rich rapidly. This is how criminal organizations have marketed the United Kingdom as a country where crime makes you rich.

Albanian immigrants have utilized a variety of techniques over the years to enter the country illegally. Since the fraudulent documents of European Union member states, the declaration as a Kosovo citizen, came the “truck,” which for several years was regarded the most successful, and recently the way with the lowest cost has been discovered, crossing the English Channel with rafts. However, as with everything low-cost, the hazards are higher, with the potential for death. But how do young Albanians get a spot on the raft?

TikTok, a social network, was widely utilized as an online place where people traffickers marketed their business, particularly during the summer of 2022. A relocation ranging from 5,000 to 7,000 pounds.

These are not statistics, but the actual experiences of three young people who share their stories exclusively for the A2 CNN microphone, from their place of work, about how they came on English land, in interviews conducted under the condition of anonymity.

“We were duped even more by the videos released on TikTok. We’re connected with some Albanians we’ve never met before, simply carrying money. We obtained them through bank transfers and were able to travel to England “.

“5,000 EUR… I obtained… I’m hoping to pay off my bills; I haven’t done so yet. However, it is a difficult work since we are not only at risk from the police, but also from other groups that are more dangerous than the police “.

“I arrived illegally by boat. It was quite challenging because the trek lasted over 40 hours. They lied to us when we began by stating the truth. They told us for 7 hours, and as we got out to sea, we discovered we’d be in England in 40 hours “.

Their experience demonstrates unequivocally that this pass does not work as stated. All three have put their lives at danger. Crossing the English Channel is not a fast boat journey with a powerful motor, but rather a six-meter-long dinghy with as many passengers as possible on board.

“My arrival was at the start, when the rafts were in operation. I arrived without knowing how I would arrive. We were tortured; we spent nearly 7 days in the mountains without food, only biscuits to keep us going. We dealt with people we didn’t comprehend when they spoke to us, and we didn’t know when we’d leave. Three of our rafts were pierced. We were fortunate to arrive in England with the fourth. We were at sea for 11 hours. We ran out of gas and were in the middle of the sea around 11 p.m. The mothers and children were also unwell. It was a challenging situation. The English ship arrived and picked us up.”

“We’ve added extra rafts. We’re sailing from France to England on a dinghy. We spent approximately 15 days on the road, 10 days in France at a camp, mountains, train tracks, etc. Our dinghy and engine both broke down after 2 hours of traveling. We stayed there for over 30 minutes before fixing it and continuing on our way. The weather broke and the sea turned rough as we entered English seas… huge waves began and the boards shattered in between. We were in risk of drowning because water had gotten inside “.

“I arrived illegally by boat. It was quite challenging because the trek lasted over 40 hours. They lied to us when we started the trip. We were told for 7 hours, but when we went out to sea, we discovered we’d be in England in 40 hours. For a brief moment, we believed that the government would come to our aid because the sea was dangerous and life was in danger.”

Human traffickers do not go in those rafts. Its management is handed to one of the people planning to emigrate to England. On clear days, you can see the English land from France, and that is the point of reference for determining which way to steer. Others in the dinghy are given the phone number of the English coast guard, who are usually the guardian angels of individuals who risk drowning at sea… and they are transported from the sea to shore, where the next ordeal of pain begins.

“We thought we were saved, but even in the camps, we suffered because there were long lines and too many people, and our clothes dried on our bodies because they wouldn’t let us change. They fed us after 12 hours. We slept in chairs and on benches for 2-3 days…”

“For a brief moment, we believed that the state would come to our aid because the sea was dangerous and life was endangered. We went to a location that I am currently unaware of. It was just smoke. We stayed there till our people arrived and picked us up.”

Albanians rescued by the English coast guard seek asylum. The Albanian government has adopted three draft laws that have been ratified by the Parliament in recent months. They want to stop illegal immigration. However, according to the British newspaper “The Guardian,” claims for refuge are granted in more than half of the instances, thus rejecting the extradition agreements signed by Albanians.

But what happens to young people after they arrive in British refugee camps?

“We stayed at the camp for three days. They then drove us to the motel. I was able to speak with some of my people who are here and have come to get me.”

Leaving the asylum camps marks the start of the second stage of life in exile. Not only do they stay in England without a residency visa, but they are also enticed into criminal work, the most common of which is cannabis growing, in order to make money to pay off street debt.

“We got involved because we needed money for the trip. We are forced to do this kind of work to pay those people the soonest possible “.

There are two major dangers associated with this type of employment. Without money, there is the clash with the law, and there are not a few examples where the English police are able to locate these artificial cannabis gardens. This is demonstrated by the number of Albanians who entered the country from England during the first eight months of this year. 529 persons were returned to Albania between January and August 2022, with 340 of them accused of working in weed houses. In other words, six out of every ten returning Albanians cultivate cannabis.

The second threat is home attacks by rival gangs, primarily of different ethnicities. When the cannabis plant is about to be harvested, households are raided to take the product, resulting in massive losses.

“This is risky at all times. There are two issues. The state has its own procedures that you can end up in prison and suffer in prison, and it’s difficult, but there’s another problem that thieves come and take your products, the job you’ve done, beat you, leave you handicapped, pour acid in your eyes…it may risk your life “.

Work is done 24 hours a day in these dwellings, and in addition to watering, pruning, or spraying chemicals for plant growth, you must keep your eyes open to be protected from all angles.

“This is a job that has no future for anyone who works in it. It’s a dangerous job where you struggle and become stressed. The police arrived to my residence . I’ve worked there three months. I’ve lost the guts to deal with this task, but always with the idea that I pay the money and it’s not a job that anyone else should do do if they want to have a nice future”.

Ervin Koçi: It takes 90 days for this plant to develop and generate the narcotic “canabis sativa.” During this phase, it remains in the incubator before being moved to the huge pots.

We are available 24 hours a day, seven days a week. We look after the flowers and water them. We prune them when necessary, and we keep a close eye on them at all times. When it’s warm outside, we turn off the lights; when it’s chilly outside, we turn on the heating. These are 55-60 days old and are now in the bursting stage.

This type of labor does not pay a set wage. To motivate the task, the traffickers pay a percentage so that the plant is cared for to produce the most cannabis. However, the end result is not even close to what those who recruit young Albanians promote, trapping them in a vicious circle of working as hard as they can not to get rich, but to pay off the debts that drove them to England.

I am delighted you came to observe our situation, which the Albanians do in this country in England, and I tell the Albanians not to lie, not to be mislead by the words of even their own people, who may have a relative who tells them that it is easy to make money in England. I strongly advise you that it is not as you believe. As you can see, we’re trying to make money, but nothing is happening…

No, even if I had known that, I would not have gone into debt to come here… Consider your options carefully before taking such a large risk…