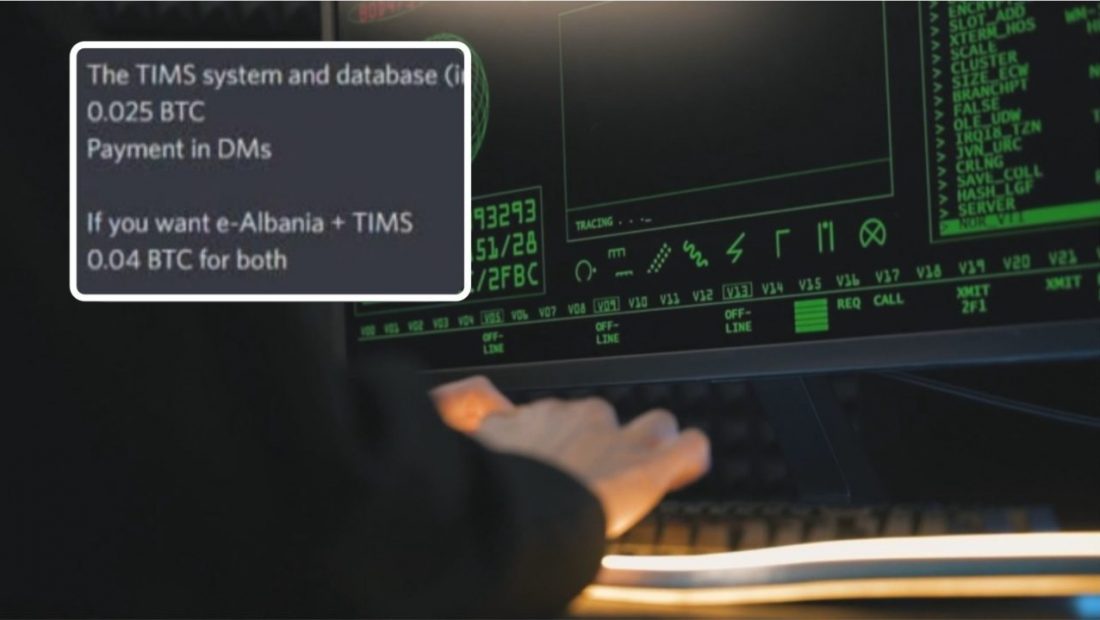 According to the Albanian State Police, “the Prosecutor’s Office has decided to prohibit the release of any data disclosed by the authors of the cyber assault” that struck our country.

“The prosecutor’s office has determined that no data released by the cyber attack’s authors shall be published by audiovisual media, print, online, in social networks, or in any other form of publishing or transfer of data uploaded by the cyber attack’s authors on the State Police’s TIMS system. According to the police announcement, the Prosecution has tasked Unit C for the Investigation of Cybercrime in the State Police, the Audiovisual Media Authority (AMA), and the Electronic and Postal Communications Authority (AKEP) with gathering all information so far and the future of the data subject to seizure.

The State Police have requested the media’s and public opinion’s understanding, claiming that “publishing of these data significantly threatens public order and national security.”

Following the orders of the State Police and the Prosecutor’s Office, A2 CNN decided to remove all contents shown on the screen and published “online.”

Journalists’ Union: The prosecution’s action has been suspended; journalists should be notified.

Freedom of expression, radio, and the media are all guaranteed under the Constitution of the Republic of Albania, and the practice of censorship in advance is expressly prohibited.

Article 4 of the Republic of Albania’s audiovisual media legislation specifically specifies that broadcasting activity is not permitted to contravene the constitutional order. On the other hand, no legislative provisions envisage anything like this happening and the media reflecting the incident.

Such is the history of Iranian criminal organisations publishing or hacking into Albanian digital networks. For the Union of Journalists, the institutional response to publishing bans should have been different.

Reuters, the most well-known worldwide news agency, has detailed at least one of the major subjects that came from hackers and were connected to Kosovo, even mentioning A2 CNN television in its stories.

“Tirana-based A2 television stated on Monday that it had obtained information about the plot from data shared online by Iranian hackers,” according to the Reuters article. “According to A2, the news has been confirmed by the government of Kosovo itself on the occurrence that was reported throughout the day by the Albanian media,” the Reuters agency says “.

The prosecution’s order prohibiting the publication of any details from the case in question only applies to Albanian media, as the Reuters agency is not affected by this decision, but in any case, for correctness and in accordance with Albanian law, our media immediately responded to the prosecution’s request.

Cyber ​​attack from Iran, Yuri Kim: Irresponsible, we are here to help

Yuri Kim, the US ambassador in Tirana, criticized Iran’s attack on Albania as reckless.

Kim reiterated the US commitment to assist, stating that cyber assaults are a persistent threat and that alliances are required to safeguard it.

Jordan Daci: Censorship with the state may become a precedent by prohibiting the publication of hacked documents

According to lawyers, it is unlawful to prevent the media from publishing the contents of the former general director of the police’s email. Publication of such information should be shielded in theory, says Jordan Daci, but banning the media is a another matter.

“How can the prosecution task an independent organization like AKEP or AMA? There are severe errors since you do not comprehend what type of institution you are “Daci said.

The second point, according to the lawyer, is that journalists are not prosecuted criminally. “Article 103 and all of the other articles that follow it, which are linked to the restriction of the publishing of actions, are related to the themes that are the focus of criminal proceedings. Additionally, everyone signs a document admitting and agreeing not to publish the materials, thus this is tied to the criminal processes. However, the media are not present “Daci said.

Cyber attacks, Meta: I warned them while I was president, but the government is concealing the consequences

According to Ilir Meta, head of the Freedom Party, the government is keeping the consequences of Iran’s cyber attack on our country concealed.

“The prosecutor’s office should launch an urgent and thorough investigation to highlight the government’s and other institutions’ duties in data management, as well as the acts and inactions that led to this scenario. As has been demonstrated, violations of national security have happened on a constant basis, and Edi Rama has lied and continues to lie about the actual repercussions of this attack on Albania “, Meta said during a news conference.

The leader of the Freedom Party, stated that only the resignation of Prime Minister Rama will restore trust in the country’s institutions.

“Only Rama’s resignation can restore citizens’ trust in government institutions. He has taken them over, as he stated from the start that the patronageists are doing an excellent job “Meta stated.

Banning of publications, Prosecution: The goal is not to censor the media, but to avoid security breaches

The Prosecutor’s Office of Tirana stated that it has not imposed a ban on the publication of the materials published by the hackers who attacked our country during the past months, but the retention of data that may compromise national security.