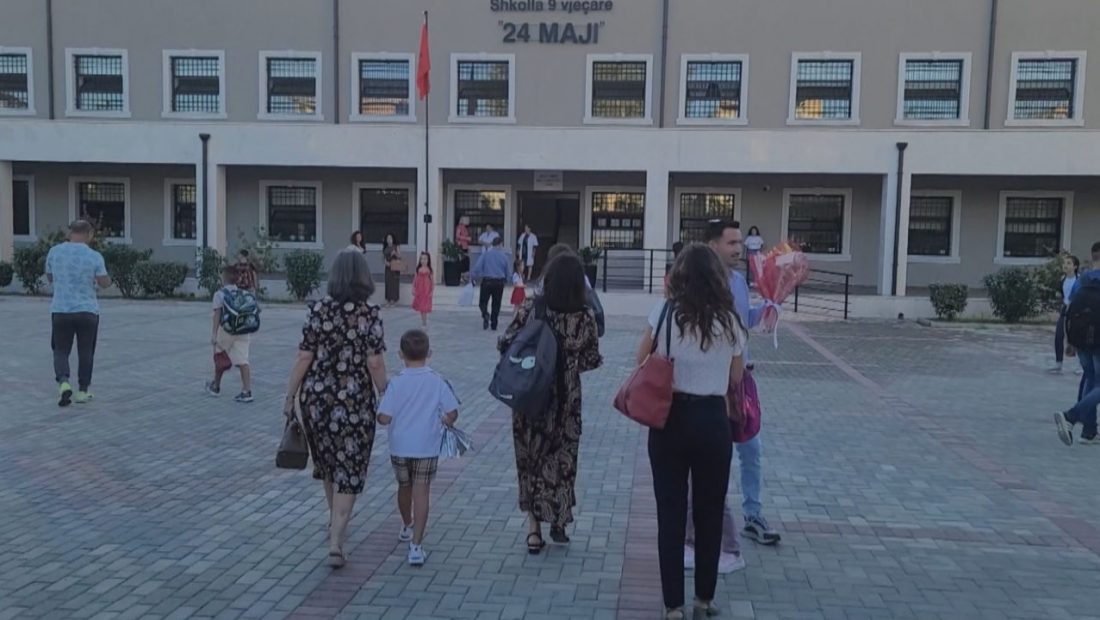 Along with the students, some 23,000 teachers are resuming their teaching duties in the country’s schools. 29,000 children will sit in classrooms for the first time, some of whom, as a result of recent reforms, won’t even be 6 years old.

This school year’s novelty is that children in Albania and Kosovo will use the same ABC book.

Unlike the previous two years, students will return to school without the Covid-19 precautions, although disinfectants and thermometers will be on hand in case of emergency.

The supply of textbooks, which are free for the nine-year education system, although used, has been completed in the majority of the schools.

In Tirana, due to the increase of the population and the short number of schools, classes will again be held in shifts. Students and teachers will meet late into the evening at at least 22 schools.

If in the past the pre-university education system struggled with classrooms that were too full of students, that challenge no longer exists; rather, the opposite is occurring, and the primary emphasis of the work of the educational directorates is now finding ways to keep the instructors interested in their job. According to official figures, 1662 fewer students than previous year were registered in Vlora for the current academic year.

Investments in the infrastructure is another urgency for some of the schools of the municipality of Vlora, in order to provide the most normal conditions for students, even if their number is small.

A first day of school alone, 6-year-old boy is the only student in the first grade

The children’ happy sounds are lacking from this school. Classes cannot be split into first, second and third grades. The few students who can be counted on the fingers of one hand, remain together in one single classroom from first to fifth grade.

Enesti had hoped to attend first grade alongside his peers, but he is now the lone first-grade student. He says that one more friend would arrive later, making them the only two children in the first grade.

This is how the new school year begins at the Griqan school in Elbasan’s Municipality. Despite having consolidated classes from first to fifth and sixth to ninth grades, they are nonetheless empty. While the students would want more friends with them. “There are three of us, but it would be great if there were twenty,” a classmate adds.

It’s also upsetting for teachers, who see their class sizes shrinking year after year. “We’ve been operating here for years with a system of mixed classrooms, primarily the lower cycle, but also the upper cycle; in fact, due to the limited number of students, this has been happening here for 10-12 years,” explains a teacher.

“Some leave to emigrate, some go to the city; the number fluctuates,” another teacher explains.

This academic year, one pre-university school was closed and three others merged across the whole municipality of Elbasan due to a lack of enrollment.

In addition to the global crisis, Albania is dealing with the exodus of young people to other nations. Evis Kushi, Minister of Education, stated during the National Education Congress that numerous measures, such as internationalization of institutions and scholarships, have been developed in response to this problem.

“Albania is currently dealing with a problem that the entire Balkan area is truly dealing with: a portion of young people are leaving the region for studies or work in western countries like Germany, but also in other nations where the aging of the population and expanding labor market demands have opened opportunities for our young people, particularly in the fields of medicine and nursing, as well as other professions of the day.

“In response to this trend, we have developed a number of new policies, including the internationalization of universities and increased support for joint and double study programs with esteemed universities in the EU, as well as for European excellence structures, which can be departments, colleges, or research institutes. Like with the top EU institutions, our aim is to raise the caliber and value of our degrees. Another strategy is the selection of key study fields for national growth, along with some of the highest-ever scholarships for certain fields, such as agriculture, education, services, and tourism, with the requirement that graduates remain in Albania t To contribute to the country and our people,” Kushi stated.

Raising scientific research to a new level, according to the minister, is another educational issue, while digitization should be the emphasis of pre-university education.

“The issues I described at the start of my speech necessitate raising it to a higher level.  Without a doubt, additional resources and assistance are needed, but most importantly, a new strategy is required. To date, universities have been the most important actors in this process, with their research projects, participation in international programs, collaborations, exchanges, and partnerships with other institutions, all of which have yielded very positive outcomes. In this regard, we have every opportunity to set a constructive example in the area by absorbing EU money for education and scientific research.

“However, even here, I think that much more has to be done, and the time has come for the companies themselves to be more involved, active, and even catalysts of this process, connecting directly with institutions of higher education.

“Even in the pre-university education system, the challenges are significant in order to ensure that our students benefit from the new skills of the twenty-first century, become competent professionals, effective employees, and honorable citizens of the future.”

The Education Congress, which will take place on September 12 and 13, will focus on “the problems of quality and comprehensive education towards European integration” and will attempt to bring together various stakeholders in the area of education, including those involved in pre-university, higher education, and scientific research, in a debate setting.

Rama at the National Congress of Education: The Albanian language is endangered; let us work together to strengthen its position

Prime Minister Edi Rama began his address at the National Congress of Education with a quote from Dervish Hima’s speech at the historic Congress of Manastir, underlining that the Albanian language is the most threatened nowadays. Rama advocated for finding ways to improve the position of the language amid the linguistic and communicative turmoil, viewing education as the nation’s most powerful weapon of resistance and advancement.

“We are all Albanians, we all have one aim, the advancement of the Albanian nation,” Dervish Hima began his address at the opening of the proceedings of the Second Congress of Manastir and after a century has gone, a cornerstone was achieved that concentrated on language, then on education as the strongest weapon of resistance and progress of the nation. We assemble here in a Congress more modest than the Congress of Manastir, but it fundamentally has the same concern, the progress of the Albanian nation.

How can we conserve the Albanian language? The solution is simple: spend an hour navigating the information channels to examine what is happening with punctuation marks, sentence structure formulation, and spelling as a whole. Language is the most endangered, and this occurs to all languages that are under this immense pressure, where the speed of communication becomes dizzying.

Rama called for the unification of all minds, not only in Albanian-speaking nations, but also across the diaspora.

May us join our minds in nations where Albanian is spoken, and let this union of minds offer us more to comprehend for tomorrow. The threat to language is now greater than ever, and with each passing day, the forces that harm it grow in strength and pressure, making them appear unstoppable. North Macedonia  has given its preliminary approval to the unified ABC Book, which we will do our utmost to extend to additional nations. We’re working with Kosovo about spreading the language across the diaspora.”

The Prime Minister said that the Albanian encyclopedia, dictionary, and fundamental book of Albanian history have entered the life cycle, which he believes is already a significant educational deficit.

“The Albanian encyclopedia, dictionary, and fundamental book of Albanian history have entered their path of existence.  Today, the road has been created for these fundamental publications to be available to our nation, the academic world, and future generations. They are open books that each generation enhances and develops, but currently there are significant gaps in this path where the linguistic effort must be complete. It is time to consider the introduction of the Albanian language at all levels and to determine how capable they are of speaking English, but it is a serious problem that we do not have a system for our mother tongue.”

Expectations without investment, the experts: There is no quality in public education with underfunding

These are some of the goals that the government and the Ministry of Education have for the upcoming academic year, but how likely are they to be achieved given the current state of public financial shortages?

Albania pays an average of 159 euros per person to facilitate education, which is less than less than in Kosovo and eight times less than in European Union nations.

To lessen the “cost” of leaving the nation, experts advise the government to focus immediately and strongly on the periphery areas. The same advice also applies to vocational schools, which from year to year are seeing a decline in the number of students.

According to Institute of Statistics statistics, education spending in the country were 3.1% of GDP last year, reverting to low levels in 2017.