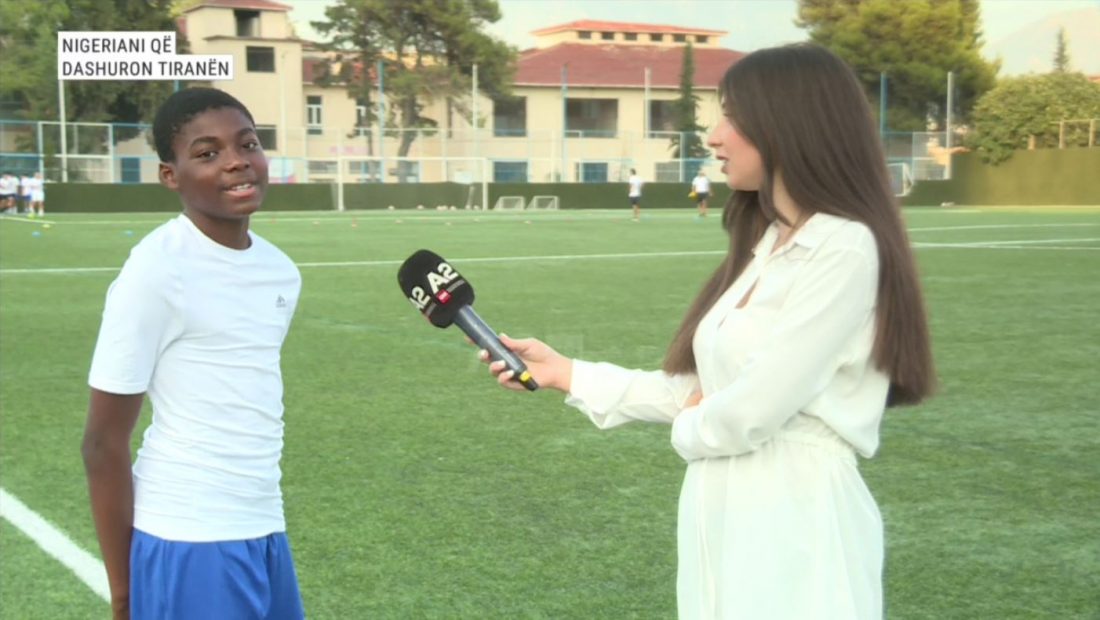 A2 journalists met Isak Alechenu on the sports fields of the “Skender Halili” complex, where hundreds of children train in the hopes of one day playing for Tirana’s first team. He is a Nigerian who adores Albania and Tirana. His desire and goal is to one day wear the blue and white jersey and, why not, represent the Albanian national team in international events.

Sometimes the desire to do what you love the most drives you to go hundreds of thousands of kilometers away from home, cross borders, and start over in a nation with different customs, a different language, and an entirely other culture. This is the case of Isak Alechenu, a 15-year-old youngster who proclaims his passion for the Tirana team as soon as you see him. He has been a member of the blue and white club for a year, and he attends every match of the team at the stadium as if he were one of the team’s ultras. “I’ve transformed into an Albanian,” he jokes, as  he expresses appreciation for the affection and generosity discovered in our country.

He tells A2 CNN why he loves Albania and why he selected Tirana. “My father played here, specifically for the Tirana squad,” he explains. “It’s a lovely country with a diverse culture, and I enjoy the people as well. This is my first year, and I want to win the championship. I liked the team itself, without my father’s influence.”

Isak Alechenu is hardly a new name in sports circles, since he was recently named to the 15-year-old national team. A unique name that catches your attention. Isak Alecenu was raised in Albania by two parents who adore Albania and, of course, think of their future here, and for the 15-year-old youngster, there could be no other choice but to select Albania and dream of one day being a member of the national team first.

His ambition is to realize his father, Abraham’s, unfulfilled dream. So far, he appears to be on pace to one day represent Albania in international events. Since he was very young, Isak has captured the interest of the entire sports community. The good technical skills and battling spirit he displays in every match he plays make you feel that Tirana will soon be joined by a quality defender with a promising future. Every day, Isak’s will and drive will be rewarded.