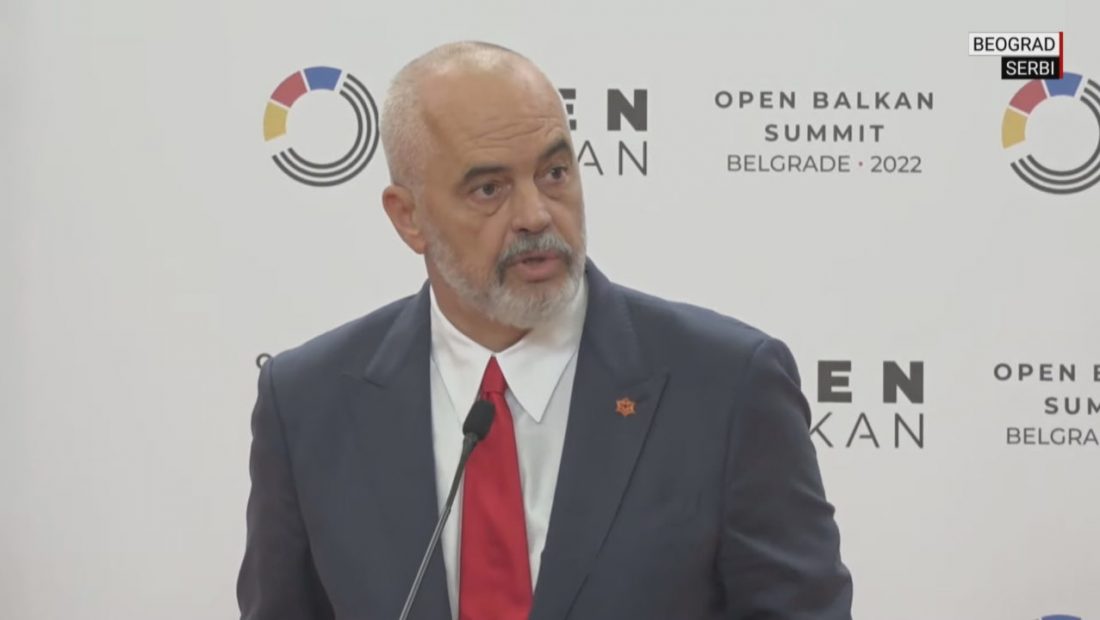 “Energy will cost the Albanian government 500 million euros,” Rama said, emphasizing that the EU should not repeat the pandemic’s mistakes.

Albanian Prime Minister Edi Rama reaffirmed the importance of the “Open Balkans” regional project during the last press conference in Belgrade, calling the meeting in Serbia the most important.

“I would like to emphasize that yesterday was the most beautiful day of the Open Balkans, and it could have been a disastrous day.  Instead of welcoming the people of industry and production, we could have welcomed the bad news of tension and the threat of war. Fortunately, the former occurred. This is the decision we’ve made: to look forward, to get closer, and to understand each other as best we can. Let us address the problems that need to be solved with patience, while not forgetting the things that require cooperation,” declared Albania’s Prime Minister.

Rama also stated the primary issues that Balkan leaders and the European Union in general must deal with in the coming months.

“This winter is going to be the worst we’ve seen in these years.” In Europe, there are proposals to switch off the power after 10:00 p.m. This means that business operations will be suspended, just as they did during the pandemic. But this time, to conserve energy. We have discussed how we would collaborate, and concrete steps will be taken. In Albania, we have decided, and I’m not sure if this is stupid, not to raise prices for family consumers and small enterprises. We have maintained the same price as before the crisis. However, hundreds of millions of euros will be required to cover the costs. The question is how long this story will go on, because even if you have the money, there may not be enough energy to go around. That is why these collaborations are formed,” Rama stated.

The EU’s aid is needed, but the PM warned Brussels not to repeat past mistakes with the Western Balkans.

“I urge the EU not to repeat the shame it displayed during the pandemic, when we were forced to seek resources in China.  This has been acknowledged by the EU’s leaders as well. We will want additional assistance from the EU. The projected costs are astronomical. They approach about 500 million euros for Albania, which would be required to maintain the infrastructure and sustain energy supplies. I hope that the EU will listen to us and that we will be part of the measures,” Rama said.

He went on to say that one of the agreements pertains to the formation of the Open Balkans Agency for Foreign Investment. According to him, this will serve as the “umbrella” for the member countries’ agencies.

Energy crisis in Kosovo, Kurti: I didn’t think we would get to this state

Albin Kurti, Kosovo’s Prime Minister, has responded once more to the country’s terrible energy situation, which has resulted in power disruptions for thousands of inhabitants.

According to the government’s leader, the situation is severe, and the extremely high price for this product on the stock market is also a factor.

It was unthinkable for Kosovo to be in this scenario a year ago, according to Prime Minister Kurti.

“The ‘Kosova A’ thermal power plant has three units that have another 60 years of life.  For the next 40 years, ‘Kosova B’ has two units. Unexpected breakdowns and necessary repairs are cutting energy production, increasing imports, and aggravating our power cuts. On the stock exchange, energy prices have risen to 1,000 euros per megawatt hour. Last year, a situation like this would have been unthinkable.

“We were concerned last year when prices rose to 500 euros per megawatt hour. We have examples where prices on the international stock exchange have hit 1000 euros before winter. The situation is critical. But we’re doing everything we can.”

Albania is bracing itself for a long and hard winter, with approximately 37% of families unable to provide heating

Winter is approaching, and more than 284 thousand families, or 37% of the total, are unable to keep their houses adequately warm.

This is the conclusion reached by the Secretariat of the Energy Community in an analysis report, which places Albania second only to Kosovo in terms of citizens unable to cope with the cold.

Others have used wood to remain warm, but they will have to use it more sparingly this winter.