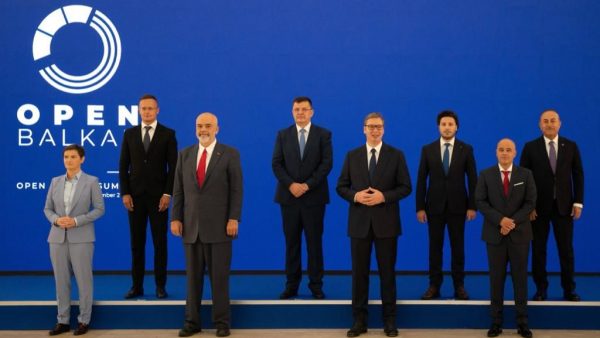 Open Balkans, the agreements signed at the Belgrade Summit

Several key cooperation agreements were reached at the Belgrade conference, which was conducted within the framework of the Open Balkans.

Several important cooperation agreements were signed amongst the Initiative’s founding countries at the Summit, Albania, Serbia and North Macedonia, but also Montenegro and Bosnia and Herzegovina, as well as Turkey and Hungary as guests.

The agreements signed by Albania, Serbia and North Macedonia:

-Agreement on collaboration in the mining and energy sectors. (Albanian and Serbian Infrastructure and Energy Ministers signed the deal.)

Rama: For Vucic, peace is the first option

At the start of the “Open Balkan” meeting in Belgrade, Prime Minister Edi Rama stated that “it is very vital that not only all of our region’s countries join this initiative, but also countries like Turkey and Italy.”

“It is critical for us that not only all of our region’s countries participate in this project, but also others such as Turkey and Italy. When we were discussing the open Balkans, an EU Prime Minister asked why they were not invited. I am delighted that they wish to be invited to the Open Balkans, as more and more countries belong to those spaces which we have been waiting for so long “Rama stated.

“Today, we come here after an afternoon to remember. At the Wine Fair, we observed hundreds of chefs from our respective nations in the same area, which was quite well-organized. Another significant economic and touristic potential began to emerge yesterday. Yesterday might have been another day filled with frightening news about what is happening on the Kosovo-Serbia border, and yesterday clearly demonstrated the Open Balkans’ choice. Today, I am glad to state that the solution to movement with identity cards is an Open Balkans proposal. I express my gratitude to Serbia’s President, who, by implementing this solution, has sent a clear message to everyone: peace is the primary option. Of course, this does not solve everything, nor does it resolve the issue that separates us, but it is a start “Prime Minister Rama stated.

“The finest Serbia-Albania-North Macedonia relations in history,” Vucic: Let’s speak with one voice in the region

“We must speak with one voice in the region.” Serbian President Aleksandar Vucic delivered this message during his speech at the Open Balkans meeting in Belgrade. Vucic praised the initiative taken by Albania, North Macedonia, and Serbia, emphasizing that the three countries’ relations are the greatest in history.

“I believe that some of you will be organizers of this project in the future. This is critical for us because, since we began this campaign, it appears to me that it has never drawn so much attention and enthusiasm. The amount to which we need to assure economic cooperation between countries is dependent not only on the success of this endeavor, but also on the region’s peace and stability. This is the first meeting since the negotiations began, and I’d want to congratulate Albania and North Macedonia. Serbia did everything it could to help attain this goal. I hope that the Open Balkans project will act to deepen economic and other relationships, and that we will speak with a single voice in the region on both the primary issues of importance and those of the region as a whole “.

Vucic drew attention to the meeting between dictator Enver Hoxha and Tito, which was followed 70 years later by his meeting with Prime Minister Rama, which, according to Vucic, possessed an unusual amount of political energy and was afterwards changed into a cordial one.

“Although some are not a part of it, and some never will be, the relations between our three countries are at their highest point in history. I recall our first meeting, 70 years after Tito and Enver Hoxha’s meeting, when Rama and I met. It was a meeting with remarkable political energy, while today’s discussions are amicable and we understand each other very well”.

The Serbian president also discussed the achievements and progress of the Open Balkans program, as well as the finalized agreements to make life easier for inhabitants of the three nations.

“We are constantly satisfied with the rate of progress, but it appears to me that we always have room to improve. The establishment of green corridors helps trade between the three countries. There will be new attempts to shorten wait times at various border crossings. We will upgrade the infrastructure in Presheva and construct two additional lanes to speed up traffic at this border crossing location. Veterinary certificates will be successfully implemented. The document we are signing today is the consequence of earlier pledges we made to improve future cooperation. We are discussing the system for the framing of basic products between Western Balkan countries. This means that each country decides to stop exporting commodities. If Serbia, Albania, and North Macedonia do this, it does not imply that other countries are doing the same. We have a m emorandum of intent to establish a Western Balkan co-production fund for film makers in the field of audiovisual and cinematographic activity. Movement with identification documents is another important step in the development of this program “.

Rama: If Kosovo had joined the Open Balkans, the issue of border ID travel would have been resolved sooner

Albanian Prime Minister Edi Rama stated that if Kosovo had been a member of the Open Balkans, the agreement on the ID documents would have been reached sooner.

“This issue might have been settled sooner if Kosovo had sat at the table and not repeatedly refused. I didn’t say this trio fixed the problem. Neither Albania nor I played any part. I just stated that the spirit, path, and ideas of the Open Balkans are being applied day by day. The agreement with Kosovo has reaffirmed President Vucic’s approach to the movement of people “, Rama stated at a press conference after signing multiple agreements with Serbia and North Macedonia as part of the Open Balkans initiative.