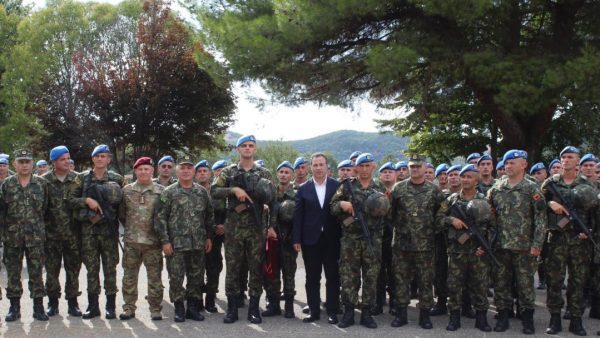 The send-off ceremony was attended by the Albanian Minister of Defense, Niko Peleshi, who recognized this as an unique occasion because the officers are serving as ambassadors for their nation in the NATO Alliance’s efforts to promote security and peace. “The Republic of Albania has consistently demonstrated that it is not only a factor of peace and stability in the region and beyond, but also a serious ally, undertaking and bearing the burden of obligations and within the framework of the Alliance’s collective defense,” Mr. Peleshi said during his speech.

The Minister of Defense reiterated Albania’s unwavering support for Kosovo’s objectives, but he also praised the expanded presence of Alliance forces as part of KFOR. “Supporting Kosovo’s aspirations for participation in international organizations contributes to the strengthening of peace and security, supports regional growth, and limits the influence of those countries that undermine democracy in Western Balkans countries. Our security challenges are still collective, indivisible, and diverse. They come from all directions and have the potential to disrupt security and stability in our region and beyond. The Ministry of Defense acknowledges the deployment and expanded participation of allied and partner country military forces in the KFOR Mission. The Alliance has made a significant contribution to the stability of the Western Balkans. As the Secretary General of NATO stated a few days ago, the KFOR soldiers in Kosovo are ready and determined to carry out their job of maintaining a safe environment in Kosovo and the area “, stated the Defense Minister.

Peleshi also lauded the officers of the initial contingent, saying they demonstrated high moral principles and standards and earned the entire respect and trust of the Operation Command and other NATO Allies via their professionalism.

The 30 personnel of the 2nd Contingent from the Land Force, effectives of the Commando Battalion, from the Special Operations Regiment (ROS), will serve alongside their Italian and Croatian colleagues in the Peja area.

The Chief of General Staff of the Armed Forces, Brigadier General Arben Kingji, the Deputy Commander of the Ground Force, officers and non-commissioned officers, as well as family members of soldiers, attended the event that immediately followed.