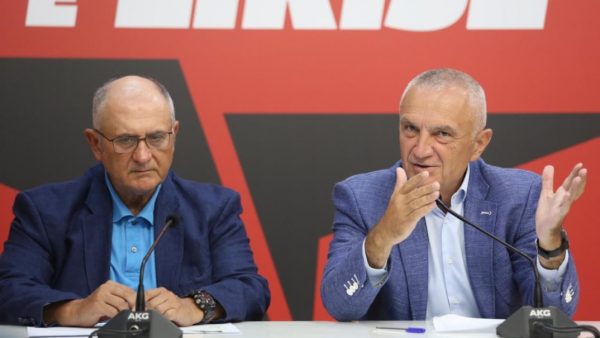 Ilir Meta, the leader of the Freedom Party and former president of Albania, claimed that there are several facts and pieces of evidence to support the exceptional harm that Edi Rama, in his opinion, has done to Albania’s interests in relation to the dispute over the maritime border with Greece.

“The question of the maritime border is a very significant one. Greece has an interest in finding a solution and profiting, therefore let’s not play into Edi Rama’s hands by fueling anti-Greek sentiments. The issue is not with Greece, but with Edi Rama. Accountability for him is inevitable. He cannot avoid it. Edi Rama will be dragged to the bottom of the sea by this scandal. It seriously undermines our interests as a sovereign nation ” Meta stated.

“We shouldn’t stir up rhetoric against Greece. Conflict escalation is one of Edi Rama’s objectives in order to hide corruption. I also want to avoid rhetoric against Serbia. That he turns into one of Vucic’s henchmen is not Vucic’s fault. We must not be fooled by his tricks. This is his purpose. He’ll create turmoil and conflicts. There are also data that he promotes criminal organizations when his administration is involved in corruption concerns in order to distract public attention”, Meta added.

Open Balkans, Meta: Serbia, a predatory country. We must be partners, not vassals

Ilir Meta strongly opposed Albania’s involvement in the Open Balkans and referred to Serbia as a nation that preys on others.

“Due to my responsibilities as President, I had previously reacted with a bit more restraint.

You know quite well what the attitude of the President of Montenegro (Djukanovic) is. Unfortunately, he is more familiar than anybody with his predatory and  northern neighbor. Even the North Macedonian president has raised doubts ” Meta noted.

“We are all aware that this campaign intends to undercut the region’s distinct European orientation. The Berlin process is crucial. It guarantees each and every objective that the Open Balkans claims to fulfill. Without a question, we need to improve ties, but only when they are based on cooperation rather than vassalage “.

“Prices will go down when the people rise up.” The Freedom Party wants that the fuel board be abolished

The government must dismantle the fuel transparency board, according to the Freedom Party. The price of oil and gasoline is being maintained high by the board, claims MP Petrit Vasili.

“The price has returned to pre-war levels on the stock market (in Ukraine).,The mafia board must be immediately disbanded, and taxes must be revised as a response ” Vasili stated.

Former President Ilir Meta announced that the Freedom Party will continue with the denouncations.