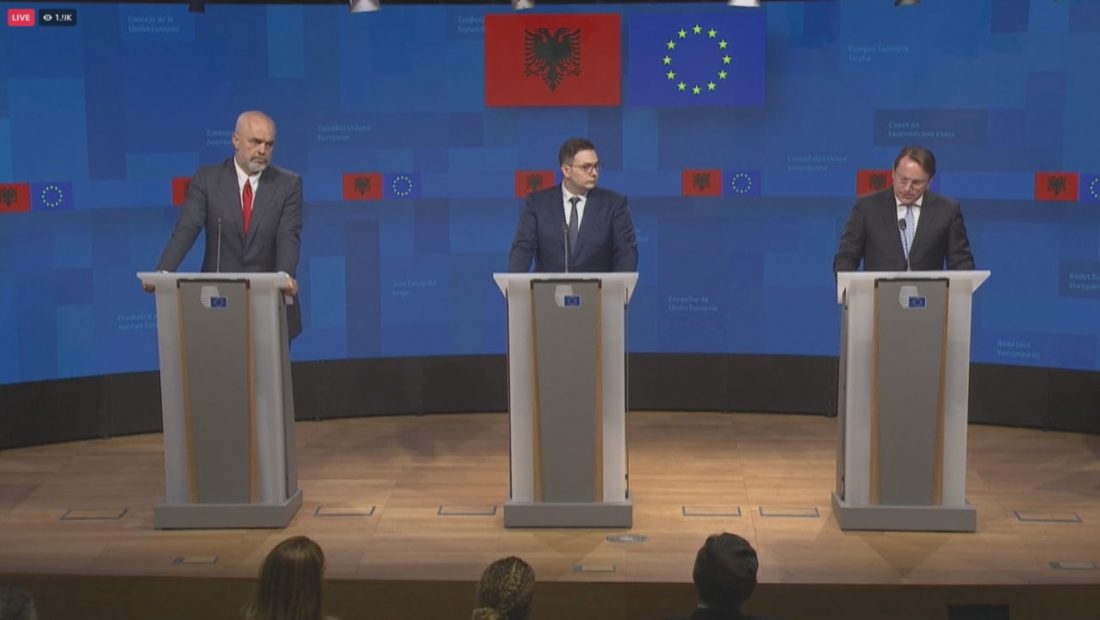 “Ursula von der Leyen knows how to stand up for the Western Balkans and the European Union. I also thank Angela Merkel, another German woman who is no longer active in politics but without whom we would not be in this situation right now. Without the efforts of the French president, Emmanuel Macron, we would not be here. The French proposal removed a ridiculous barrier”, the prime minister said at the beginning of his statement.

“The earthquake, the epidemic, and the war made things difficult, but they also strengthened us. We are aware that this is not the start of the end but rather the end of the beginning. However, given the current circumstances, we are satisfied. Now, we must create a strong, democratic, and European Albania in addition to an open, reliable, and democratic Western Balkans”, Rama added.

“One day we will welcome Albania and North Macedonia as equals”, Von der Leyen appraises the achievements of the two countries

“Your government and people have worked really hard to get here; they have demonstrated dedication and tenacity to do so. They have established the rule of law, provided free media, created a thriving civil society, implemented several reforms, and modernized their economy. You took these actions because they are beneficial to your nation and increase its chances of survival.”  On the eve of the intergovernmental table, Ursula Von Der Leyen, the president of the European Commission, gave this opening statement at a press conference alongside the prime ministers of Albania, Edi Rama, and Macedonia, Dimitar Kovaevski.

As she voiced her support for the two nations in this endeavor, the President of the EC stressed the three important issues that will be discussed after this session.

“Negotiations: Following today’s intergovernmental conference, the commission and the negotiating teams will go to work. The assessment will allow Albania and RMV to fully understand the forms and agreements, and we’ll get going right away.

“The second point is that we will be close in crucial procedures. Albania will join the European civil protection, and this will enhance the confrontation on civil emergencies, earthquakes, and several other issues in order to ensure that the EU will be there and support such causes.

The third point is that the benefits will continue because you will have a path to the EU, there will be increased investment in important areas, such as energy and transportation, which will optimize the impact of EU funding, which means new employment and opportunity for your citizens, and they deserve it.”

She applauded the efforts of the two governments, describing the course of this process as a triumph for the Czech presidency.

“Finally, Prime Minister Rama and Kovaceski, I will speak directly to you. You have demonstrated great leadership, strategic patience, and vision, but in these trying times following the brutal Russian aggression, you have demonstrated your partnership with European principles as true allies. Congratulation on the success of the Czech presidency in initiating negotiations, which was built on the efforts of past presidencies.

Varhelyi, who is “dedicated to bringing the entire region into the EU,” says that today marks a significant step in that direction

Oliver Varhelyi, the Commissioner for Enlargement, reiterated the European resolve to get the entire region into the EU even though the accession negotiations between Albania and North Macedonia and the European Union began today. Today, he claimed, is a crucial step in fulfilling this goal.

“We are starting membership talks with North Macedonia and Albania. The Western Balkans continue to be our top priority despite the shifting geopolitical landscape. More than ever, we are dedicated to integrating the entire region into the EU. We are moving forward with this pledge significantly today,” tweeted Varhelyi.

The first intergovernmental political conference with North Macedonia is being held today. To be here today, it took a lot of effort. I’m eager to work with you to achieve our shared goal of getting North Macedonia into the EU. The Western Balkans in the EU,” the commissioner continues.

Biden welcomes the start of negotiations: US will continue to be a reliable partner

Joe Biden, the President of the United States, has praised in an official statement the beginning of membership negotiations between Albania and North Macedonia and the European Union.

In a message posted on the White House’s official website, Biden expresses his appreciation for the EU’s decision, particularly in light of the ongoing conflict in Ukraine.

“The United States applauds the European Union’s important actions toward integrating the Western Balkans into the Euro-Atlantic community, including the opening of membership negotiations with Albania and North Macedonia. At a time when Russia has shattered Europe’s peace, it is more necessary than ever to support dreams for a united, democratic, and peaceful Europe. Democracy, security, and prosperity in the Western Balkans remain essential to this goal,” the statement stated.

“As these countries fight to preserve human rights, strengthen democratic reforms, and uphold the rule of law, the United States will remain a strong and trustworthy partner. The recent actions taken by the European Union, Albania, and North Macedonia should motivate all nations in the region aspiring to join the union to deepen their commitment to strengthening democracies “.

Rama: Every step in the negotiations, opportunities to progress with aspects of our country’s life

In a joint press conference with the European Union Commissioner for Enlargement and Good Neighboring, Olivér Várhelyi, and the Czech Republic’s Minister of Foreign Affairs, Jan Lipavsk, Prime Minister Edi Rama stated that “every step in the negotiations is an opportunity to advance aspects of the country’s life.”

“The demand to initiate proceedings against corrupt judges is a long-standing request of the European Union, which is consistent with the request of the Albanian people, who firmly supported the judicial reform, including the vetting and the punishment of those who sold and purchased the justice. I’ve learned how the EU operates, how everything written becomes part of the commission’s memory, and how what is spoken today is not forgotten tomorrow “Rama stated.

“Every stage in the negotiations is an opportunity to develop areas of the country’s life,” the prime minister stated.

Jan Lipavsk, Czech Foreign Minister, stated: “The Czech Republic has benefited greatly from EU enlargement and the integration of the Western Balkans. We welcome and encourage Albania to align its foreign and security policies with those of the EU. We anticipate that the essential reforms will be carried out in order to finalize EU membership. The negotiations will take place within the context of a general negotiating framework. Albania must carry out critical changes in areas such as the rule of law, human rights, and the strengthening of democratic institutions “.

According to Commissioner Olivér Várhelyi: “This historic decision sends a powerful signal to the Western Balkans, confirming the EU’s enlargement policy’s relevance. A new adventure begins today, eight years after the candidate country’s status. My message to Albanians is straightforward: we want you to be a member of the European family. There is no question about that. We will infuse additional credibility and dynamism into the negotiations with Albania beginning today. We will make certain that Albania is fully prepared to join the European family “.

According to Sali Berisha, the Democratic Party’s leader, “Albania’s progress on the path of negotiations with the EU is mission impossible,” because Edi Rama, “the man who represents Albania today in Brussels, with its terrible ties to crime and corruption, autocratic attitude towards the media and control of the judiciary, is the main reason for the refusal to open negotiations 5 times in these years.”

“The start of Albania’s negotiations with the EU is a huge accomplishment for Albanians! Dear friends, today in Brussels was the official start of negotiations between Albania and the European Union. After the signing of the Stabilization and Association Agreement with the EU in 2006; after the EU accepted Albania’s proposal for membership in 2009; after lifting the visa regime for Albania in 2010 and after granting the candidate status by the European Commission in 2012, which Edi Rama and Fier’s advisors vetoed, this is a significant achievement. On this occasion, the Democratic Party, while fully supporting the European Council’s decision, emphasizes that Edi Rama, the man who now represents Albania in Brussels, is the main cause, with his terrible ties to crime and corruption, autocratic attitude toward the media, and control of the judiciary:

1- of 5 times rejecting to open negotiations throughout these years

2- Failure to meet the conditions, as stated in the recent European Parliament resolution and today’s declaration by CDU lawmakers in the German Bundestag

DP notes that today’s negotiations began in Brussels after Edi Rama decided in Albania, against the will of the Albanian people, to complete monization, granting the his party the same powers as in January 1990.

In this scenario, DP feels that Albania’s progress toward EU negotiations is a near-impossible task “, according to Sali Berisha’s post.

The DP’s leader “assures Albanians that the Front for the Salvation of Albania will soon free the country from Rama’s government, and that with deep and thorough reforms, the route of Albania’s integration into the EU will recognize the normalcy and speed it deserves.”