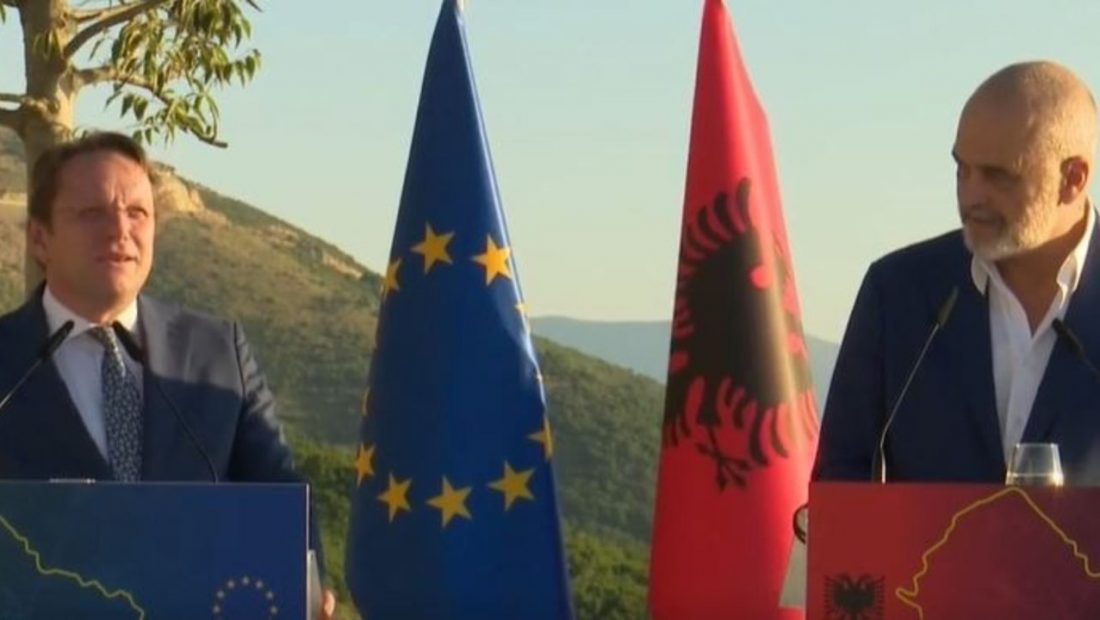 Edi Rama, the prime minister of Albania, and Olivér Várhelyi, the EU commissioner for enlargement, attended an inspection and joint press conference at the Vlora bypass.

Varhelyi declared in his statement that “Albania is ready to begin negotiations.”

“Albania is ready to begin negotiations, and there is no doubt that Albania has done all required. I’m hoping that next week will be the one we’ve been waiting for “Varhelyi declared.

“There is no economy and no trade without links, without roads,” the commissioner stated.

“One of the most fundamental concerns to emerge from our economic strategy is connectivity. This is part of Corridor 8, and I am grateful to the EBRD and the EU for making it possible “, according to the commissioner.

“It’s a wonderful day here. It’s a pleasure to walk up and appreciate the view of Vlora, and one day the commissioner will tell us more about what we can expect, which is the start of formal negotiations with the EU “. This is what Prime Minister Edi Rama remarked at a joint press conference with EU Enlargement Commissioner Oliver Varhelyi following the inspection of the EU-financed Vlora Bypass.

The president of the Albanian government highlighted in his statement that Albania has nothing more to do but wait for the green light for this process, which was given an hour ago.

“I don’t want to linger on this subject. We have stated things, and now the parliament of North Macedonia is likely to convene to adopt, at the end of a highly politicized debate and unfairly, what is referred to as the latest French proposal, while Albania has nothing more to do than wait and see the green light on an hour ago. We will say it again: regardless of the formal aspects of the process, we will proceed as though the negotiations should have begun with reforms and promised investments “.

Rama stated that the Vlora by-pass is not only important for traffic relief, but it also helps to minimize air pollution.

“This is an important part for the country because the national route traveled through Vlora, where traffic was extremely congested during the summer. With the by-pass, traffic is reduced while air pollution is reduced. We also have areas where citizens can stop and take photos. This is an entirely new road axis. The mountain had to be unlocked “.

Meanwhile, Belinda Balluku, the Minister of Energy and Infrastructure, has stated that she is in talks regarding the Tirana Bypass, which will connect Albania’s north, south, and center.

“The first item we dealt with were the expropriations, which required a significant amount of labor. The naked area of the mountain is being greened, first by sheltering it with a protective net. Everything has been a barren mountain. The EBRD is supporting this initiative, and the EU has provided a full grant of 20 million euros. We also discussed the Tirana bypass, which would connect all highways coming from the north to the south and the center of Albania, and the railway from Vora to Hani I Hotit, which we have begun to support “.