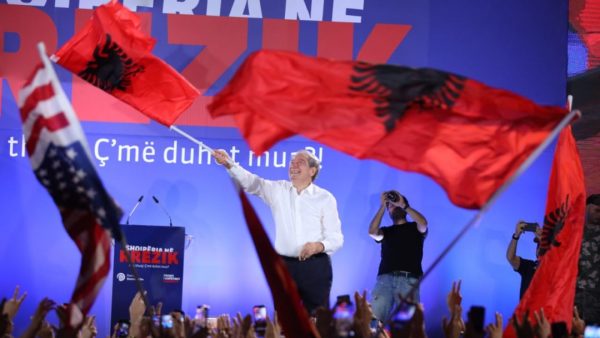 Although the sentiments were strong, it began as a concert. Twenty people went up to Sali Berisha’s national protest podium in front of the prime minister, but the audience made it clear who they were there for.

With the national flag in hand, Sali Berisha ordered the demonstrators to deliver clear statements that signified a departure from the oppositionism of the previous eight years, establishing the tone of his leadership, in contrast to that of his predecessor, whose name he never mentioned.

“On your behalf, I shall address Edi Rama as follows: Edi Rama, we are both enemies today. This word is hard and harsh, but my heart cannot say anything else because you, Edi Rama, have power as an ideal, but I and these men and women, boys and girls have freedom as an ideal “, he stated.

He repeated corruption claims in addition to political ones. He described July 7 as the start of his mission. “I say, “Enough stealing, go!” We will issue him a ticket for all of this, and this is only the beginning of our freedom march “.

He also had a message about Albania’s European journey, in which he pushed for the commencement of negotiations as soon as possible, but the government, according to Berisha, does not want this because Rama’s road to Brussels travels through the Open Balkans. “There are no Albanian interests, but Belgrade’s interests come first. Then we can’t go without informing him: Edi Rama, the Albanian opposition, and patriotic Albanians everywhere will say no to the Open Balkans, but yes to the Berlin process “.

Among the speakers on the stage was Monika Kryemadhi, the head of LSI and DP’s primary ally. “Today, more than ever, at this remarkable assembly, in this grand rally, we send a clear message that our Albanian flag is the sole party flag. Friends, more than ever before, this boulevard gives Albania and Albanians hope. The opposition’s aim now, more than ever, is to avoid disappointing Albanians like they did a year ago “.