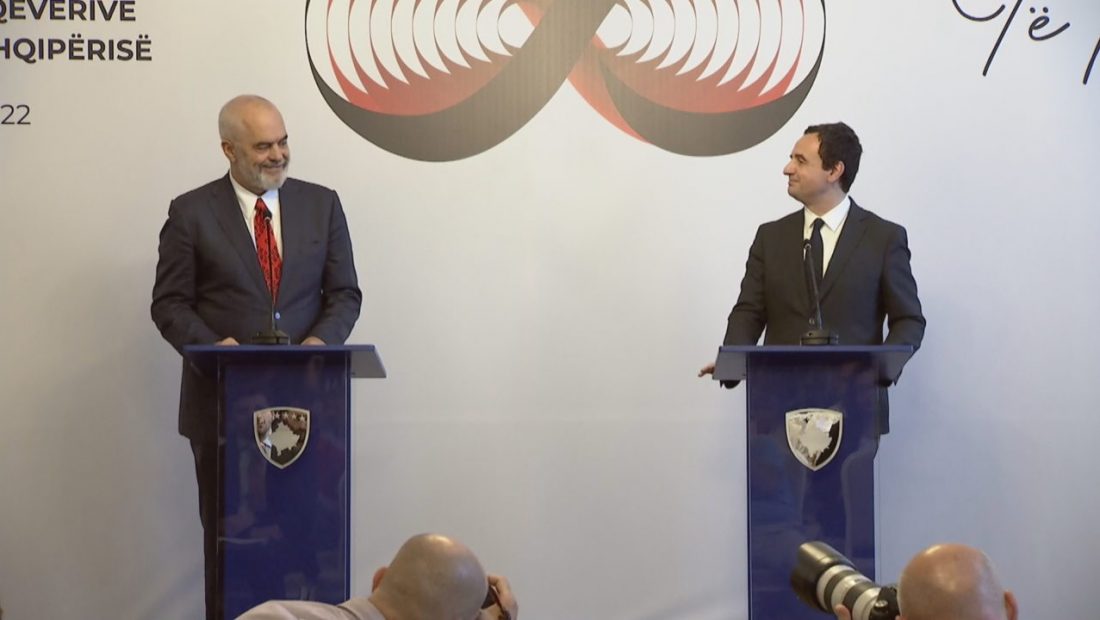 “Our relations demonstrate that when there are no outstanding diplomatic issues, success in other areas is assured.” This is what Kosovo Prime Minister Albin Kurti announced at the start of the two governments’ joint meeting in Pristina. The head of the Kosovo government did not hide his optimism for what has been accomplished between our two countries, but he stated that the comparison cannot stand alone, so he requested harmonization in regional and foreign policy.

“It demonstrates that overcoming political concerns at the outset, rather than at the conclusion, ensures cooperation, integration, and development.” Fundamental political issues loom over mutual social distrust. Economic success is heavily reliant on social trust. Our comparison to ourselves is not the ideal measure. We must assess development by comparing what we are doing to what industrialized countries are achieving. The two countries’ relations should also be evaluated. This historic occasion will serve as a historical judgment for us. We must coordinate our actions on regional and foreign policy issues.”

He stated that 75 of the 127 agreements signed between the two countries have been implemented, but that further achievements will be announced within the next six months.

“Our eighth meeting of our two governments takes place six months later. Except for one that may enter into force soon, all agreements have been realized in the last six months. Facilitation of acquiring a residency permit and diploma counting We are working to make all agreements a reality, and 75 of them have already been implemented. All of today’s accords will make residents’ lives easier by constructing a common infrastructure. The next results will be available six months later.”

“Only Albin Kurti’s protest can bring down the Kurti government.  As long as Albini does not protest, there is no one to overthrow him,” Rama stated during a joint press conference with Kosovo’s Prime Minister.

“We cannot comment on perceptions since that wouldn’t make us Prime Ministers, neither good analysts. The new port of Durres, the dry port in Prishtina, and the railway in the center are all vital to us,” Kurti remarked.

The Democratic Party’s leader, Sali Berisha, declared the day before that Rama is attempting to remove Albin Kurti’s government as part of a mission assigned by Serbia.

“Rama has been tasked in a new anti-Albanian act, to work closely with albanophobes and Serbophiles in Kosovo to overthrow the Kurti Government, a government that has consistently defended and is defending the interests of the Albanian nation, but also of the European Union and NATO in the region,” Berisha said.

In response to the epithets given to him in Kosovo, Rama stated, “When it comes to accusing me about my pro-Serbianism, they go beyond that, I’m Vucics brother . Aside from that, I believe that we do not need a radicalized Serbia. We must do all possible to expand the opportunities for this portion of Europe, which is not without reason the most historically backwarded, to advance to a higher level of economic and social engagement. And after that you’ll say that I’m Albin’s brother, not Vucic’s.”

Prime Minister Edi Rama and counterpart Albin Kurti discussed the Open Balkans initiative once more, a regional movement in which Albania is a co-founder but Kosovo refuses to join owing to territorial problems.

“Our relationships are fraternal; the brothers do not have intermediaries.”

I have nothing to add to the Open Balkans idea, which is a multinational endeavor “Albin Kurti stated

Rama denied claims that he met with Kosovo firms to convince them to join the effort by circumventing the government. “True, the Open Balkans do not unite us, but it also does not split us. We have different perspectives at this moment, which is not a secret, but this does not preclude us from moving forward in bilateral ties. Everything we live in the Open Balkans must be lived with the Kosovo government,” Rama stated. “It would be unusual if Albini and I agreed on everything; that would be a problem.”

Prime Minister Edi Rama said that a combined parliamentary session with MPs from both countries will be held to commemorate the 110th anniversary of independence of Albania.

“We have reached some key conclusions. Following each joint meeting, we add to the strategy document inked in Prizren. We will convene a joint Assembly of the two republics to commemorate the 110th anniversary of Albanian independence, a jubilee session in which the lawmakers of both countries will meet to address the Albanian people everywhere “Rama said.

The Prime Minister of Albania also stated during a joint press conference with his counterpart, Albin Kurti, that the first intergovernmental bulletin will be produced by the end of the year.

“At the end of the year, we will publish the first intergovernmental bulletin that will serve to understand all the figures of the agreement and their implementation; it will be an official notebook of the two countries,” he said at a press conference in Pristina as part of the two governments’ meeting.

“Our governments’ most ambitious strategic project is the development of the new port of Durres and the dry port of Pristina, a project that will drastically revolutionize the economic infrastructure between the two countries, placing Albania and Kosovo at the center of a regional gravity,” he said.

At a combined meeting of the governments of Albania and Kosovo, Prime Minister Edi Rama remarked that the volume of trade exchanges between the two countries has substantially expanded since the work began closely with the government of Kosovo.

The Prime Minister also asked the Interior Ministers of both countries to make border crossings easier.

“I remind the Ministers of Interior that it is unreasonable to have problems and unending waits this season due to one-by-one checks of cars heading towards Albania and vice versa,” Rama stated.