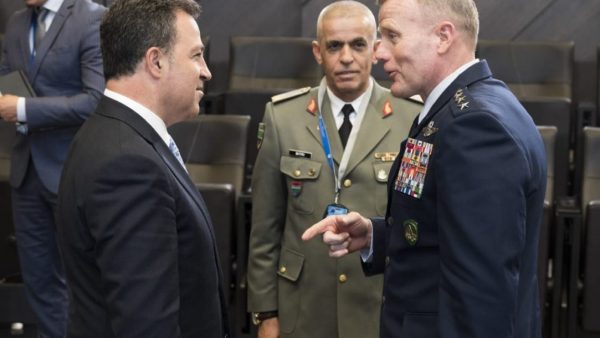 Niko Peleshi, Albania’s Minister of Defense, attended a meeting of the North Atlantic Alliance’s Ministers of Defense at NATO Headquarters in Brussels.

The discussion focused on further strengthening the Alliance and maintaining support for NATO partner countries at a time when Russia’s aggression in Ukraine has already lasted 100 days.

The meeting was attended by the Defense Ministers of Ukraine, Georgia, Sweden, and Finland, as well as the European Union’s High Representative.

During his speech, Defense Minister Niko Peleshi stated that our country will assist and contribute to the expansion and strengthening of military capabilities along the Alliance’s frontiers in order to safeguard and preserve its population.

Minister Peleshi discussed the new Porto Romano project, which will also include infrastructure for the Armed Forces and the NATO Alliance.

“We appreciate our essential infrastructure not only from a national standpoint, but also from an Alliance standpoint. Given its geographical location, the Port of Durres functioned as a welcome hub for training “Defender Europe 2021,” proving to be a crucial node connecting the Adriatic Sea and the Black Sea, also known as Corridor 8 “, stated Defense Minister Peleshi in his speech.

He called attention to the potential consequences of Russia’s attack on Ukraine for the Balkan region. In this situation, the Minister of Defense emphasized the significance of advancing the Euro-Atlantic integration process of the region’s countries.

Minister Peleshi also stated that it is critical to convey a clear message that the Alliance is committed to the stability of the Balkan region and that Russia, through its “levers,” should not be allowed to destabilize the entire region.

NATO Secretary-General Jens Stoltenberg welcomed the Alliance’s ministers earlier at a working dinner, where he hailed NATO’s allied and partner countries for their generous support in military capabilities, financial assistance, and humanitarian help.

He also emphasized that the Alliance is and will remain dedicated to continue its assistance for Ukraine, and he is optimistic that the Alliance’s Heads of State and Government would agree a Comprehensive Assistance Package during the June 29-30 Madrid Summit.