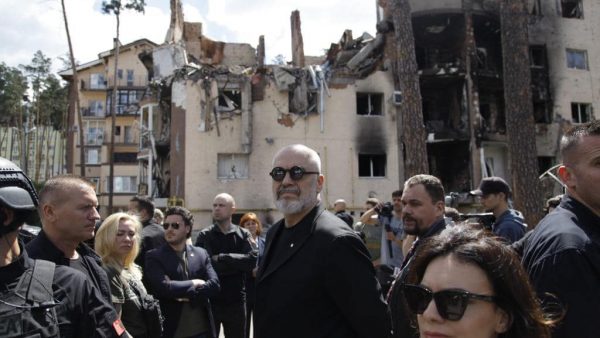 Prime Minister Rama has shared photos from his trip to Ukraine, where he is accompanied by his Montenegrin counterpart, Dritan Abazovic.

Prime Minister Rama is accompanied by Volodymyr Shukrov, the Ambassador of Ukraine to Albania, Endri Fuga, the Director of Communications, and Elisa Spiropali, the Minister for Parliamentary Relations.

“We arrived in Kiev with Edi Rama to offer Ukraine and its residents our heartfelt solidarity in preserving the right to freedom!”

“Montenegro will continue to assist Ukraine during this tough period and humanitarian disaster,” Abazovic said in a brief Facebook message.

The Albanian Prime Minister initially went to the bombed-out areas of Borodyanka and Irpin, followed by a visit to an exhibition featuring evidence from the Russian-Ukrainian war.

Although the majority of the fighting in Ukraine is concentrated in the east, Russian forces periodically bomb other cities as well.

On February 24, 2022, Russia sent its army in Ukraine in what it called a “special military operation.” Most countries have criticized the neighboring country’s invasion, and European countries and NATO members have boosted security measures in response to this attack.

The Speaker of the Assembly of Northern Macedonia, Talat Xhaferi, was the first Albanian official to visit Kiev following the February 24 assaults, meeting with Ukraine’s President, Vladimir Zelensky, on April 27.

Rama is returning to Ukraine after visiting in January 2020, when Albania was the OSCE leadership.