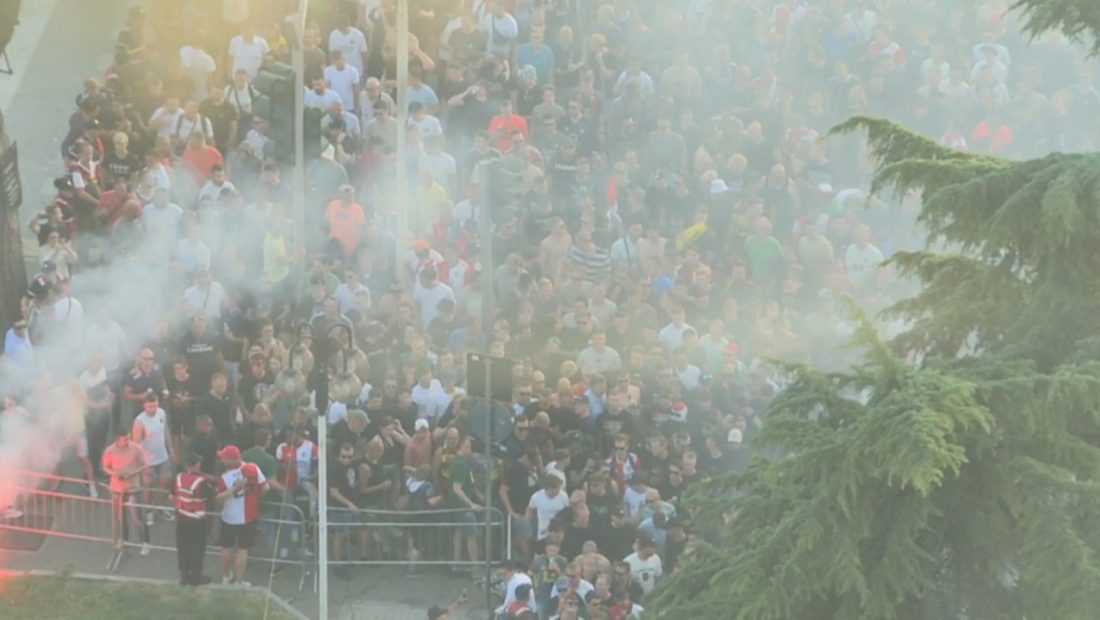 The sun always rises after a storm. Tirana awoke quietly on May 25, despite the unusual events of the night before, which were brought to light by the State Police, which appears to be the only side that has not slept soundly, after clashing for the first time the attitude of Europe’s ultras.

The aftermath for law enforcement was serious: 19 officers were injured, one with a knife. The Police thanked the residents for their civility and advised them not to get engaged in this unknown behavior, while pushing the supporters to behave like Europeans.

The Dutch and Italian fans, on the other hand, acted as if they had heard the deputy director of police, beginning the day with the element they never forget in the celebrations they plan in their nation, alcohol.

Albania is merely a station to them, and they know very little about it, but they have established the initial impressions of our country. They believe cigarettes and alcohol are inexpensive, and they are familiar with Dua Lipa, the Albanian-born singer who has dominated global music markets.

The calm of a late-starting day distinguishes them everywhere, but the risk from rising alcohol levels in the blood stays permanent.

While Albania suffers the disadvantages of such a final, the people of Tirana are experiencing some of the benefits that such an event brings. UEFA has planned activities and festivities in “Sknderbej” square, particularly for the grand final.

The camp of Rome fans, located on the grounds of Lake Tirana, has a joyful atmosphere. What is clear is that as the hours pass, the atmosphere will only intensify as it awaits its peak at the national stadium “Air Albania” and the outcome of the match in the capital.

Over 300 flights with fans from Italy and the Netherlands landed in the Rinas Airport of Tirana to attend the Conference League final.

In an interview with A2 CNN, Minister Belinda Balluku showed the situation’s management plan as well as the method of returning spectators following the conclusion of the match between Rome and Feyenoord.

“The situation is under control. There was excellent synchronization. There have been no delays or issues thus yet.

The same situation may be described in Durres, which has been calm. Fans who did not arrive prepared were also assisted.

As a result of the Europa League final, small businesses, particularly those tied to tourism, are making a profit.

Souvenirs, particularly those bearing the logos of the two finalists, Roma and Feyenoord, are in high demand.

However, the match, which will be held at the “Air Albania” stadium, has not been as beneficial to certain other enterprises.

Although numbers are approximate, the chain of businesses associated with the presence of fans and tourists on the occasion of the Conference League final is thought to have had turnovers in the hundreds of thousands of euros.

Dutch fans: Albanians demand up to 650 euros in the black market for tickets, we have only 200

Two Dutch fans who arrived in Tirana to see the Conference League final between Feyenoord and Roma tell their country’s media that they found high prices for tickets on the black market.

Huig van Duijn, 52, and Gerrit van Velzen, 55, told Dutch media trouw.nl that they were looking for tickets on the streets of Tirana and found prices ranging from 500 to 650 euros, but the limit they want to pay is 200 euros.

“We just wanted to be here, to enjoy this moment, and if we can’t obtain a ticket at a reasonable price, we’ll drink a beer and watch the game somewhere else.” “Van Duijn adds.

Despite the fact that there were multiple incidents of violence between fans of both sides the night before in Tirana, Van Dujin recounts his experience after going through Pisa to Albania. ” There were a lot of Rome supporters on our plane,” he continued, “but nothing to worry about.”

Earlier, A2 CNN field reporters said that Feyenoord supporters were hunting for tickets, with some willing to pay up to 2,000 euros per one.

Important sporting events are an excellent way to promote the host country. Such is the Conference League final, which takes place in Albania’s capital. The two clubs that made it to the finals have been using their official social networks to flood their fans with videos from the city of Tirana and the stadium where the decisive match will be played.

The Rome team, which has 4.4 million Instagram followers, shows fans how to go to the National Arena stadium, a billboard dedicated to their coach at the University of Tirana, and the conditions in the fan area.L

Tirana after the riots and violent celebrations, Roma and Feyenoord bring out the dark side

After fighting broke out in the streets of Tirana on Tuesday evening, thirty people needed emergency medical treatment at local hospitals.

Approximately 20 of them were police officers who were treated at the Trauma Center. Trauma has also provided services to some Italian fans. Four Dutch fans were treated in the sanatorium emergency room.

Although intended as a celebration of European football, last night saw multiple violent events between the ultras of the two fans and state police, resulting in injuries on all three sides.

Around 21:00, a group of Feyenoord hooligans attempted to cross the police fence and proceed to the area where the Italian fans were staying to confront them.