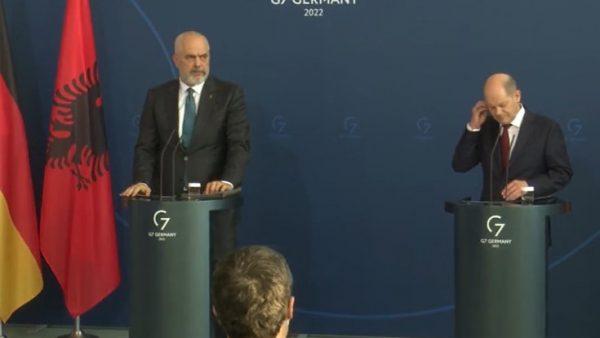 The Albanian Prime Minister, Edi Rama, announced that he has received Germany’s readiness to go forward with the Western Balkans integration process at the next European Council meeting in June.

During his meeting with Chancellor Scholz, the Prime Minister emphasized his commitment to meeting all of the prerequisites for the integration process.

“The conversation with the Chancellor encouraged me because I found a willingness on his part and on behalf of Germany to advance the process of Western Balkan integration, beginning with the completion of a phase of the process involving Albania and North Macedonia, which we hope will occur at the difficult council in June. We are determined to do all possible since our goal in the integration process is not to go to Europe, but to construct an Albania that meets European criteria”, Rama stated.

Regarding Russia’s aggression in Ukraine, Edi Rama confirmed that Albania supports the EU’s call for an immediate ceasefire.

“Regarding Russia’s aggression on Ukraine, we certainly agree with the chancellor, not only with Germany, but with the entire EU. We condemn the crimes being committed there and unanimously demand a truce and genuine dialogue to end this agony, which is claiming the lives of millions of people “Rama stated.

Also, the Albanian Prime Minister stated that he spoke with his German counterpart about the Open Balkans initiative, which tries to revitalize the Berlin Process, which Rama claims has been bogged down in diplomatic channels.