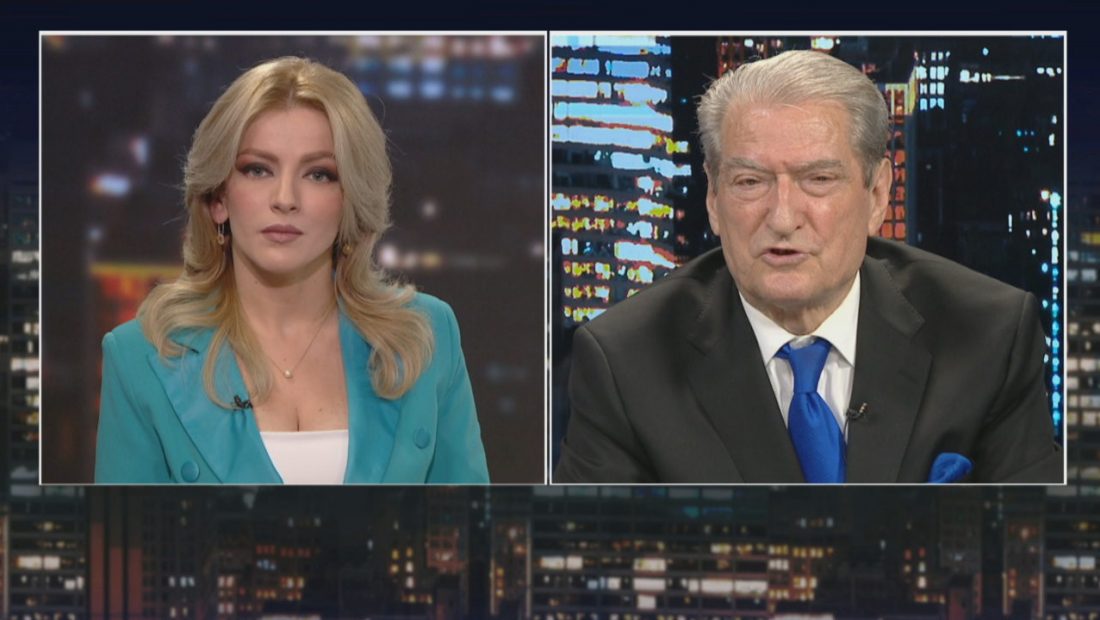 Sali Berisha, today’s guest to the studio of “Debate” on A2 CNN by Alba Alishani, presented his initiative “Berisha 3,” “so that Albanians no longer remain a nation that gives birth to children for emigration.”

“Berisha 3″ is an initiative for Albanians to no longer be a nation that gives birth to children for emigration, to no longer be the people living in one of Europe’s greatest natural resource countries and working as laborers in other people’s territories. Albania’s population and per capita income began to rise between 1992 and 1997. Then, as it did from 2007 through 2014. Because hope increased. As a result, integrating Albania into the EU and strengthening its position in NATO is a major undertaking for the country. I support this proposal, always based on the free will and vote of Albanians and Democratic Party members. But there is one key reason: Sali Berisha is the only one who has defeated Edi Rama twice,” the former prime minister declared.

When questioned how this project could be carried out since the US has designated Berisha “non grata,” he emphasized:

“In this crucial battle for the DP and the country, I address the Albanian gene.  Whoever sees it in retrospect, I have always been that way. In 1998, I had the entire world against me, represented by the OSCE and the EU. They dispatched a troika to inform me that I needed to quit. Because I was a major impediment to socialist rule. I gave them what they deserved. My efforts to bring that moment back have resulted in one of the country’s most undeniable accomplishments. To convince the Albanian people, I conducted no lobbying. I was resolved to apply the values that all nations must have in order to be free. From nearly non-existent relations with the United States or with other countries, it was possible to achieve culminating relations. It did not happen because I possessed magical abilities. It happened because the partners commended the Albanian government’s efforts and reforms: I stand with the ideals that make Albanians freer, safer, and more prosperous.”

Yuri Kim has done everything possible to distance herself from the Democrats, including using the slogan “we will eat grass too.” As a result, I will tell “governor” Kim that if she wants to have open contact with Democrats, she should apologize for utilizing the brutal dictator Enver Hoxha’s expression in August. It was a well-calculated sentence. She either studied Enver Hoxha or had contacts with Marxist-Leninist groups that propagated Hoxha’s works. It was a phrase chosen specifically to insult Albanians. Albanians have eaten grass instead of food because of the tremendous poverty produced by Enver Hoxha’s rule,” Berisha added.

“This is a violation of the fundamental values upon which democracy is founded, as well as a violation of its status.  However, it was yet another failed attempt by the lady to choose the DP’s leader. I’d want to remind Albanian folks, particularly Democrats, that following the March 6 elections, Governor Kim dispatched a representative to my office with her ideas. The recommendations were for me to step down from the race for DP chairman for the time being. I could nominate whoever I wanted to that position, even if only provisionally. I could then run for party leader with complete confidence that Basha would quit and accept the decisions. My reaction was a clear rejection of all of its intrusions in the DP’s internal concerns. I refuse and strongly advise you not to meddle in the election of the Democratic Party’s forums and chairman. Such interventions are unquestionably unacceptable.

I conveyed the message that for me this fact is enough, the fact that you allow yourself to intervene, to determine who should be elected chairman of the DP, to run once again for party leader. “I didn’t need to wait for an answer from Kim because I found it in Basha’s statements,” Berisha declared.

Berisha urges Albanians not to allow Kim’s interference with the DP influence their regard for the USA.

“I find her intervention in the DP’s internal matters to be reprehensible.  Regardless of political affiliations, I believe no Albanian would accept such a thing. For no particular political party. However, I have a request for Albanians and Democrats. These views tarnish the image of America, the land of liberty, in the eyes of Albanians. As a result, I urge Albanians not to let their opinions of our strategic ally, the United States, be affected. On the other hand, this is another another setback. Evidence of unethical pressure on the legal system.  I have previously condemned the “governor’s” intervention in the vetting college for the nomination of particular individuals.”

Enkelejd Alibeaj met with the US Ambassador, Yuri Kim today, and was recognized as the Democratic Party’s commanding chairman by the American chief diplomat in Tirana.

But Sali Berisha, the former prime minister and founder of the Democratic Party, who was invited on the show “Debate,” believes otherwise.

“First and foremost, Alibeaj, the whole Democratic Party leadership, and the former chairman have been sacked by the assembly of December 11, which is now generally and legally acknowledged.  It is preposterous to suppose that a former deputy chairman who was fired by 4900 delegates can be accepted as party chairman,” Berisha argues, adding that “Alibeaj is not chairman; sadly, no one recognizes him as such, except the guy who nominated him and “Governor” Kim.”

As regards former chairman Lulzim Basha, he claims, “had a mission from Edi Rama to harm and disrupt the Democratic Party”. Berisha says that those who still support Basha have no future in the party.

“Alibeaj, and every other democrat, should believe this.  The scenario that arose on September 9 was the outcome of a decision made by the party’s chairman, Lulzim Basha. As a result, he left, accepted the December 11 decision, and resigned. Anyone who continues to support fascism is doomed to failure. As an example, during his meeting in Shkodra, Basha stated that the Court’s ruling will be contested in court, although he is not a party to this procedure.  Despite being a lawyer, Alibeaj just carried out Basha’s order.”

Former Prime Minister Sali Berisha revealed his greatest mistake in the studio of A2 CNN’s “Debate” hosted by Alba Alishani. According to him, the choice to return to the helm of the party should have been made five years ago, not this year.

“My biggest error was making a decision in 2022 that I should have made in 2017. Because I have received many encouraging words from genuine friends who did not do it for Berisha’s career, but for the sake of DP and the country.  When I asked him to retire in 2017 and he said no, I knew Basha would not quit even if we lost the next elections,” Berisha declared.

When asked if he has any competitors for the DP leadership, Berisha said, “I haven’t had public meetings in 8-9 years.  Nobody should have any complex to compete with me. I have heard all naive theses, such as the individual cult. But, a man who has had no power other than his moral one and his legacy, that is normal. But this is not a case of indivual cult. Cults are built on fear, and Edi Rama is building one by forcing people to name him Skanderbeg. Because he is ruthless in his behavior and feels that terror is the key to retaining power. What fear can I, a powerless man, evoke? If my work done in the past speaks for me, it is not a sin.”

“I don’t know who the candidates are, but I welcome any man or woman, official, MP, or activist to run in this contest.” Lulzim Basha, too. I no longer refer to him as a “puppet” because he no longer serves in any official post. He has the option of running for any office or continuing his normal life as an MP if he so desires. He answers to my offer with Alibeaj launching a lawsuit despite his lack of competency. However, I hope that (Basha) will eventually find peace,” Berisha concluded.