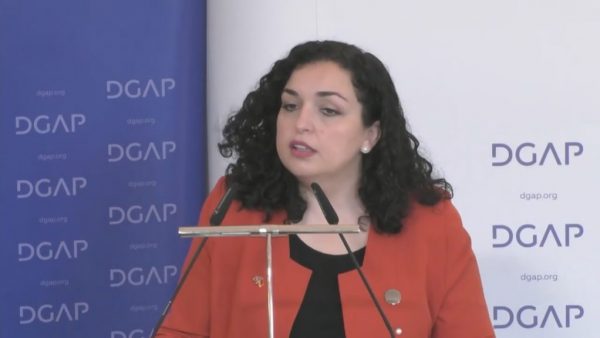 The international community must reject Serbia’s actual manifestation of tyranny. President Vjosa Osmani expressed alarm in a tweet at the absence of thousands of Albanians from the Presevo Valley from Serbia’s presidential and parliamentary elections, and condemned what she described as ethnic cleansing through the passivity of residential addresses.

“According to sources, 6,000 Albanians in Serbia have been denied their fundamental right to vote as a result of a premeditated campaign of ethnic cleansing through administrative passivation,” Osmani wrote.

Albanian leaders in the Presevo Valley previously stated that Serbia has been passively encrypting the addresses of Albanians living in the three southern municipalities of Presevo, Medvedja, and Bujanovac for years in order to alter the communities’ “ethnic structure.”

Meanwhile, many Albanians in the municipalities of Presevo Valley, Bujanovac, and Medvedja voted in the legislative elections but not in the presidential ones, arguing that Vucic does not represent them. Serbs having dual citizenship in Kosovo voted in Serbia following the Kurti government’s refusal to allow these elections to take place on the state’s territory.

Kosovo stated that it requested Serbia to convey a request for elections to the Pristina government, but Belgrade refused. Numerous buses carried Kosovo Serb inhabitants between North Mitrovica and Gracanica and other Serb municipalities such as Raska.

Aleksandar Vucic, Serbia’s President, declared victory in the April 3rd presidential and parliamentary elections. According to preliminary data published by NGOs in Serbia, IPSOS / CeSid, Vucic, the Serbian Progressive Party’s nominee and current president, received about 60% of the vote. Presidents can be elected in the first round if they receive more than 50% of the vote; otherwise, they face a runoff.

Vucic recognized that the Ukraine conflict had impacted the campaign and stated that Serbia has no intention of abandoning its balanced approach of pursuing EU membership while maintaining close ties with Russia and China. Belgrade, he stated in his victory speech, would pursue a policy of military neutrality and close relations with Moscow.

“We have developed positive relationships and alliances in a variety of sectors and will do everything possible to sustain them. We will remain committed to a policy that benefits Europeans, Russians, and Americans. We shall maintain our military neutrality,” Vucic stated.

Eight candidates competed for president, but former center-right Armed Forces chief Zdravko Ponos was Vucic’s chief adversary. Despite his apparent defeat, Ponos spoke to supporters in angry tones, declaring that the election signaled the end of an era for Vucic and his party.

“These elections were won in metropolitan areas. We won the presidential election in these areas, and we are likely to do so again in Belgrade. Additionally, we achieved favorable results in the parliamentary elections “Ponosh stated.

Albanian parties campaigned in the elections with two lists: Shaip Kamberi’s “Coalition of Albanians for the Valley” and Shqiprim Arifi’s “Alternative for Change.” However, preliminary results indicate that Albanians will be represented in the Serbian Parliament by a single member, Shaip Kamberi.