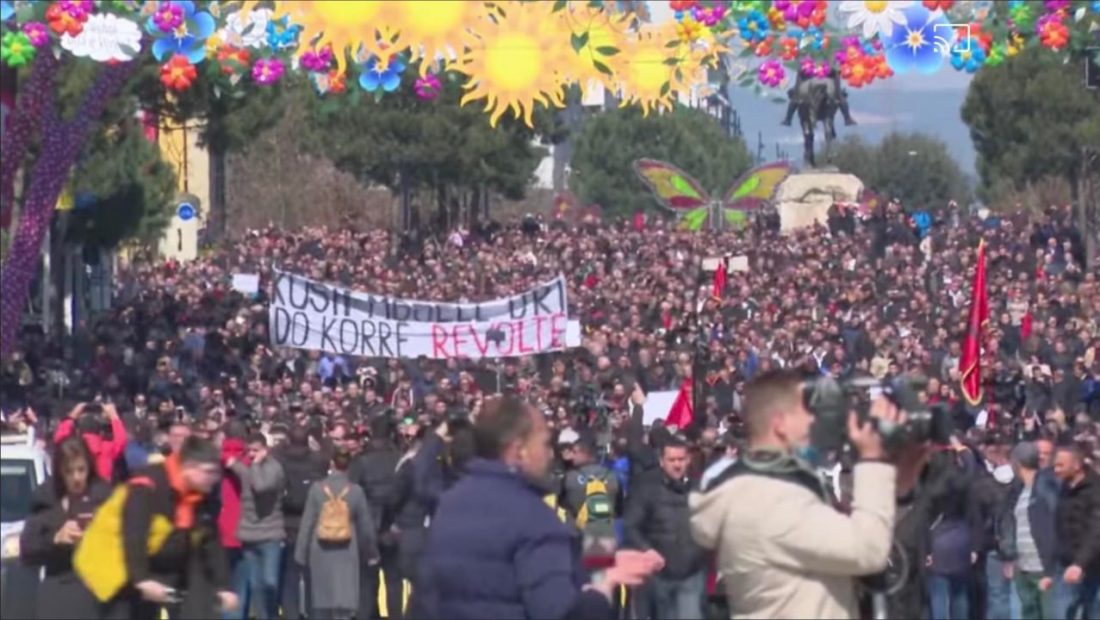 For more than two hours, thousands of citizens protested in front of the prime minister’s office in opposition to the rise in food and energy costs, threatening to continue at the same hour every day.

They assembled at 11:00 in Skanderbeg Square to march towards the Prime Minister’s OFfice, and around 13:30 they marched to the capital’s streets, notably the bridge connecting the boulevard with the Ring and the alley of the Ministry of Interior.

A small group of protestors has moved to the Police Headquarters to demand the release of the arrested protesters.

On the fourth day of the demonstration, activist Mirgen Qiraxhi stated that it will continue at the same hour the next day.

The placard that accompanied this protest said, “Sto stealing from us,” and there was a significant attendance.

Pano Sako, an activist, argued that there is no Putin in the world who stands in front of the majority, accusing Prime Minister Edi Rama that he loves a crisis.

“You should be ashamed of yourself for demonstrating,” Rama told citizens protesting.

Prime Minister Edi Rama has claimed that he is ashamed that Albanians are the only people in Europe who “protest the effects of the Ukrainian war.”

“Today, I am sad that Albania is the only NATO and European country protesting the first results of the war in Ukraine.  Only those who claim not to understand believe that the increase in oil prices is not a result of the war,” Rama remarked.

“We have shown our compassion.  The energy increase bill is paid by the government, not by any Albanian family or small business. Currently, the government covers 80% of the energy. No other European government has done anything like this.  The price of energy has risen in Greece, Italy, and Kosovo,” the Prime Minister added.

Prime Minister Rama has summoned the government and claims that the package of measures to combat the pricei increase problem is taking shape, despite his announcement two days ago that it would be ready within a week.

“The program of Social Resistance to the effects of the global energy crisis as well as the price war in Ukraine is gaining final shape,” Rama writes.

Oil prices hit a new high of more than 260 lek a week ago, climbing by about 70 lek per week, while the stock market soared from $ 90 to $ 130. The sharp increase in costs in our country has sparked several citizen protests.

The National Board of Fuel Administration has decided that the price of oil will be 217 ALL today, down from 223.

The Council of Ministers passed the Normative Act “On some additions and adjustments to law 8450, dated 24.2.1999″ on the processing, transportation, and marketing of gas oil and their by-products” on March 12, 2022.

The selling prices of petroleum by-products for consumers are regulated and monitored under this normative statute.