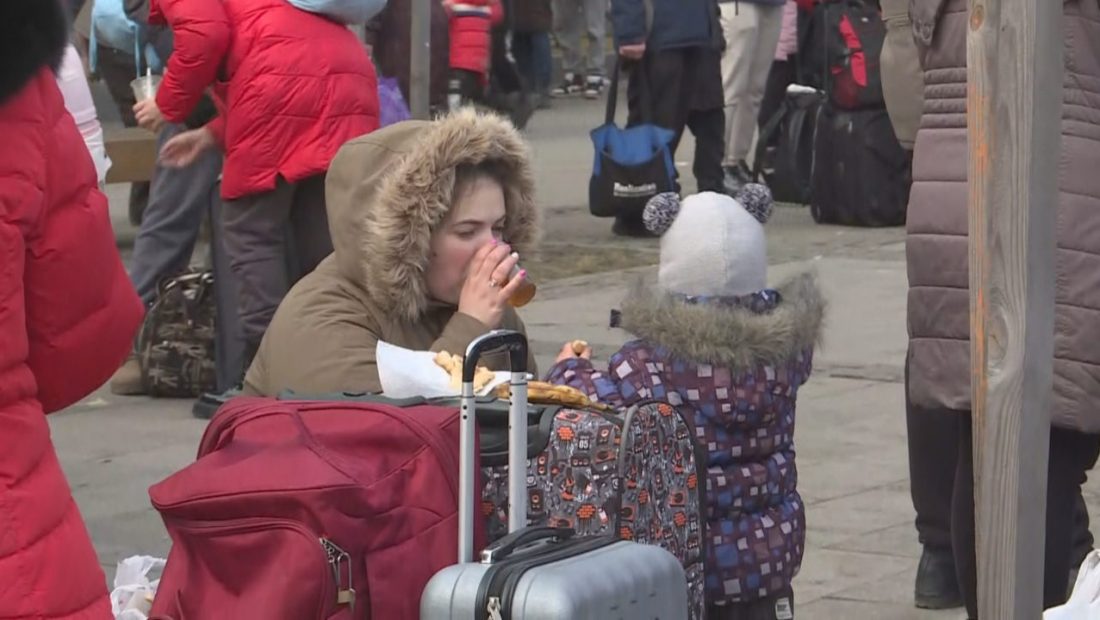 The drama of mothers with children fleeing the war in Kharkiv amid bombings and warning sirens is brought to us by the A2CNN team in Lviv, Ukraine. Reporter Jul Kasapi and cameraman Endrit Myftari show us images of hungry children who have been stuck in the terminal for days, revealing a different reality.

Some of them cry as they admit to having lost everything, while others prepare to flee the country, leaving their families behind. This is the situation reported from Lviv by reporter Jul Kasapi.

No one knows when the next train to Poland will leave from Lviv’s train station, yet all mothers of children and the elderly wait in subzero temperatures.

Sudden announcements have made everyone cross the platform tracks in search of rescue trips.

This young man plays the Ukrainian national hymn on the piano, reminding us that his country never gives up.

Images of hungry children who have been stuck in the terminal for days, on the other hand, reveal a different reality.

This family was able to flee Kharkiv.

“We are from Kharkiv and have just arrived. We’ve brought everything we own. We stayed in the basements with our crying children. We would like to thank all of the volunteers, both men and women. Thank you so much for everything. It is something we will never forget. Glory to Ukraine and our heroes. We’re going to win! My husband refused to leave Kharkiv. He said that he intended to die at home. We all left, but he stayed at home. Everyone is scared. It was tough to get to the Lviv train station.

However, the suffering is considerably worse.

“Yes, he is my son! Now, we want to stay here and get some rest. We need to wash and change our clothes. We haven’t brought anything with us. We’ll see what happens and then consider going abroad. We’ve been in the basement for six days. I do not wish this to anyone. We were a group of around 20 people in the basement, sharing food and getting to know one another. They couldn’t leave the shelter because they were constantly hearing gunfire.

Reuniting with family should bring tears of joy, but this is not the case for everyone.

“It’s a living hell. I don’t have my house anymore. My daughter is the one who is crying. We don’t have any clothes or anything. We were able to save our children, our cat, and our dog. We don’t have anything with us. Our city was completely destroyed. The most beautiful city is now destroyed!  When the war broke out, my husband was working in Germany and was unable to return home. We were stuck in Kharkiv and couldn’t get out.

Russia has been attacking Ukraine for more than a week. The bombs were also aimed at civilians, including homes, schools, health clinics, and journalists.