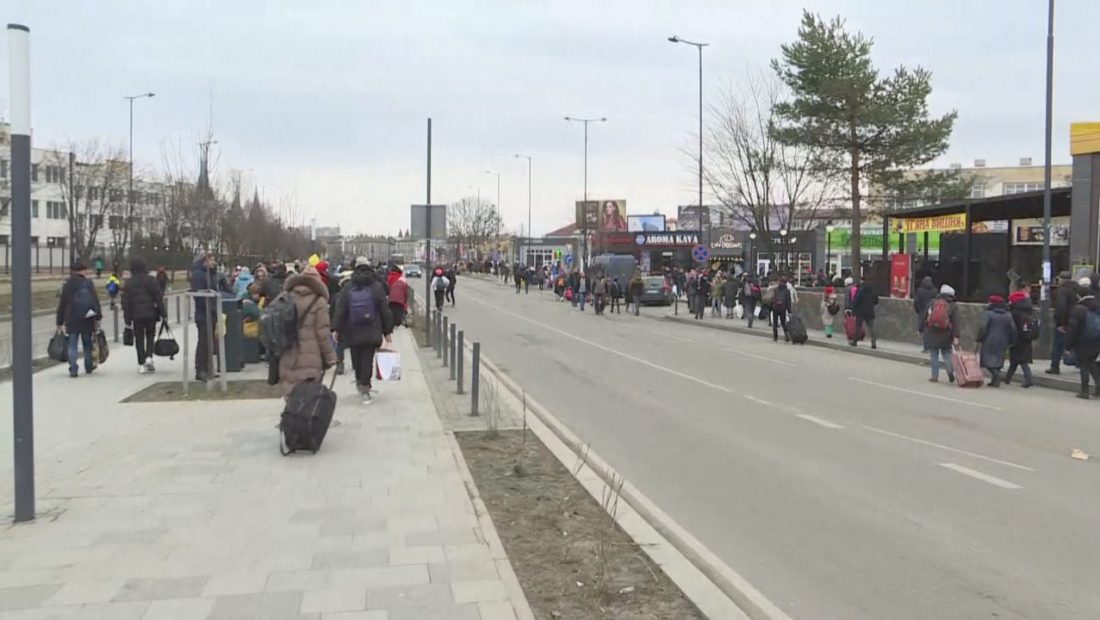 Poland has opened its doors to Ukrainian citizens escaping the conflict, becoming a second home to them

So far, 400 thousand people have crossed the Polish border in search of a safer place to live.

The two countries’ friendship was readily apparent when border crossing processes were simplified.

Women, the elderly, and children traveled to the border by train, car, and even on foot.

Finding a safe refuge does not mean that they will be at ease.

Tents have been set up in the first meters of the Polish territory, to provide medical help, food, and even clothing. The first stop is at the reception center in Pshemish, a city that is affected by the migration flow.

The A2 CNN team crossed the Polish border to see how the refugees are progressing.

The line of cars at the border is kilometers long, and war refugees are being accommodated both officially and voluntarily. Men are not allowed to leave because they must defend their motherland.

“Men can accompany children and women to the border. However, every Ukrainian male between the ages of 18 and 62 is required by law to return to his homeland. No one in this group has been allowed to leave Ukraine, despite attempts to corrupt them. Everyone is back in the nation, and no one is permitted to leave.”

Many citizens are fleeing Ukraine, but there are also many who join the resistance front willingly.

Ukrainians are not the only ones who walk to the border.

“I’m not sure where I’m going.  I’ll travel into Ukraine and see what they tell me about where I have to fight,” a Ukrainian man said.

“I am from Germany, and I hope Putin returns home and the world is at peace. I will fight for Ukraine,” another man said.

Leaving the family to battle was not an easy option.

Refugees from countries other than Ukraine

Not only Ukrainians, but also refugees from other nations in the Middle East and Africa, have been affected by Russian military assault. However, t hey do not enjoy the same advantages as Ukrainians.

“I was born in Algeria, but I currently reside and study in Kiev. So far, it’s been a challenging journey. We took the train from Kiev to Liv and then a taxi. Because of the long line, the cab dropped us off far from the border, and we had to walk for at least 40 kilometers. There were a lot of people there.  We spent two nights outside in the open.”

“There were two queues, one with Ukrainians going smoothly and the other with foreigners, which was rather crowded.  There were Algerians, Africans, and Indians. There has been violence. We were mistreated by the Ukrainian army. I’m not sure why.”

For them, crossing the border is their first odyssey. The second is the arrival of family members on Polish soil.

“The situation is tough since the migrants must go between 100 and 150 kilometers on foot.  We provide food, accommodation, transportation, and medical care. There have been several pregnant women who have walked for miles. There have been people who have suffered violence.   The situation appears to have improved slightly after the first influx.”

Volunteer organizations from all around the world have arrived to assist these residents, who have had their aspirations and goals cut short by the war.