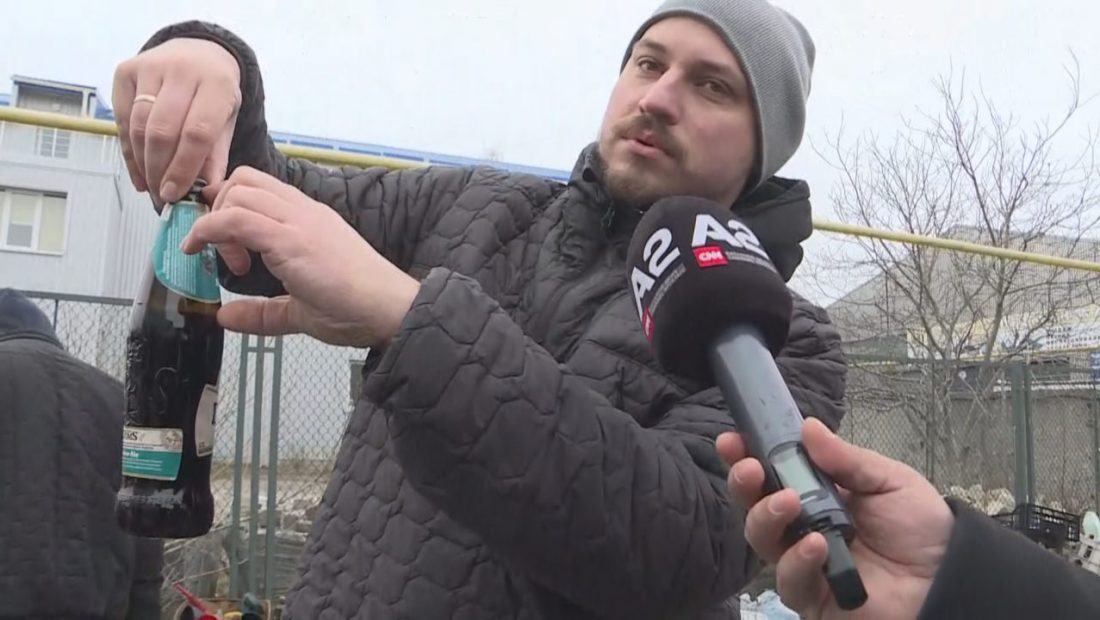 Everyone in Lviv contributes what they can to their army. In a city pub, the owner posts the numbers showing the losses of the Russian army’s, every day, on a sign outside the building.

Kiev will be Ukraine’s Stalingrad, according to Alexei, a young man who has joined the civic resistance.

“We make military masks and collect medicines to distribute to those in need. Everyone in Ukraine these days, as President Zelenski put it, is a fighter. I believe Kyiv can be defended and turned into a Stalingrad for the Russians,”  he says.

“Everyone is trying to keep morale high, and in some parts of the city businesses have changed their destinations,” said Alexei, a young Ukrainian.

Inside the factory that makes Molotov cocktails

It may appear to be an alcoholic beverage production firm at first appearance, but it is actually a Molotov cocktail factory that supplies civilians in several Ukrainian cities.

“This is not that difficult. We begin by filling the bottles with a mixture of gasoline and motor oil. It’s made up of two-thirds gasoline and one-third automotive oil. We mix it and pour it inside the bottles, leaving some space. Then we cover it with a fabric that fit tightly.  We isolate them and send them to locations where they are needed.”

In this factory, molten aluminum is used to make a different type of Molotov cocktail.

“It’s aluminum; it burns at a higher temperature and lasts longer,” one of the volunteers, Mikolai, explains for A2 CNN.

Finally, 30,000 Molotov cocktails have been delivered to the soldiers. However, the facility doesn’t just make explosives. It also manufactures iron rods for damaging vehicle tires.

Karina tells us about the unbelievable and terrible events that are taking place.

“It’s a disaster. I can’t believe it’s actually happening. The Russians are aggressors; they are murdering our families and children. They do not select who they kill. They claimed they would come here to bring peace and save us at first. But what are we being saved from? We were quite pleased with our people and our government.  We are, nonetheless, extremely unified.”

Another volunteer from Crimea, who is also Russian, explains how her country’s propaganda is also splitting families.

A university professor has abandoned the lecture halls to assist the troops.

“”I saw the need to come here in metalworking, to assist and come to the aid of our soldiers,” said the professor of the Lviv Polytechnic University. Ukraine has been defending itself against Russian bombing for more than six days, forcing over 800,000 people to escape the country. Aid is coming in from all sides, and young people are finding new ways to remain involved with the military.