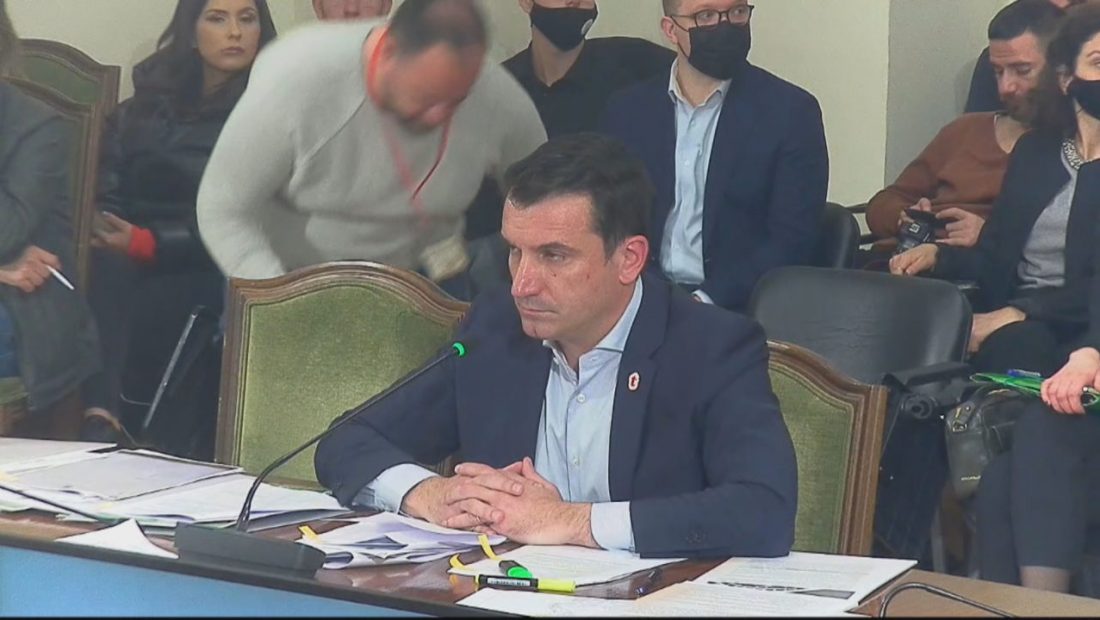 The case of corruptive procedures for the construction of the expensive and much-praised waste incinerators has caused a huge political debate in Albania, as the former Minister of Environment was arrested over corruption allegations.

An Investigative Commission on this case, led by members from the main party of the opposition, has summoned many members of the Albanian government to question them about the ongoing procedures.

After the Minister of Industry one day ago, the Mayor of Tirana, Erion Veliaj, was present today in front of the Commission to answer their question, a discussion that ended very quickly in harsh debates.

The statement of Tirana Mayor Erion Veliaj before the Commission of Investigation into Incinerators has starded with high-toned debates.

“I recognize them after seeing the images of them with the DP leaders in Zimbabwe,” Veliaj responded. “I saw them in a photo with Gert Bogdani, the Democratic Party’s director of foreign relations.”

“I haven’t had any discussions or travels; I was introduced to these personalities through the media,” Veliaj responded. “If this is called knowing them, then I am familiar with them.”

This was not the case, according to Tabaku, who reminded the mayor that “false testimony is a criminal violation.”

The debate moved into personal attacks between the Mayor and the commission’s chairwoman, Jorida Tabaku.

Tabaku is slanderous, according to Veliaj, referring to the case he won against her in court for slander. “We went to court, and you were found to be defamatory. You have been found guilty of defamation,” Veliaj stated.

Tabaku has retaliated by accusing him of being Tirana’s biggest liar. “The country’s greatest misfortune is that he employs the SPAK as an attack dog,” Tabaku added.

Tabaku and Veliaj also clashed over the subject of land deposit and taxes.  Tabakut claims that the Municipal Council has yet to make a judgment on the matter, which would grant the concessionaire another 45 million euros. Veliaj, on the other hand, accused her of having a conflict of interest, claiming that her family members are constructing apartment buildings near Tirana’s Aviation Field.

The mayor of Tirana shared several images, which he claims show members of the Commission of Investigation getting questions from outside, which he claims is done to prevent him from speaking.

The Committee’s Chairperson , deemed this action as shameful and demanded the Speaker of the Assembly to take measures for the fact that the images were taken from the security cameras of the premises where the meetings were being held.

The Secretary General of the Council of Ministers, Engjell Agaçi, was next to be questioned by the Commission. He claimed that the procedures followed for the funding of the Elbasan incinerator complied with the law. Funds for this project, he stated, were provided in 2015.

“For contract finance and any other type of financing from the state budget, decision-making is divided into two phases. It is the entire procedure that takes place in the Ministry of Finance in regard to the Contracting Authority’s documentation, and in the case at hand, funding for the construction of the waste management plant in Elbasan was allocated in November in the period 2015-2017.”

When asked by the commission’s chairwoman, Jorida Tabaku, if there had been orders from superiors to carry out the procedures more quickly, Agaçi denied it.

The General Secretary of the Socialist Party, Damian Gjiknuri, was also summoned for his statement. He admitted that he knew Klodian Zoto, but denied that his friendship benefited the shareholder. Gjiknuri strongly denied traveling with any of the incinerator’s stockholders.

“I am not familiar with Ms. Gugallja, but I am familiar with Mr. Mertiri’s face. I met Mr. Zoto several times as a minister when I visited the Elbasan plant in 2017 and several times in the office about an investment for a glass factory. We also have worked together in the Ministry of Defense in 2011 when I was Secretary General and he was the coordinator in the minister’s cabinet office. I’ve known even Lulzim Basha since he was 16, not just at the “Sami Frashri” high school but also in the Netherlands. And we don’t have a conflict of interest because of that. I have not traveled with either of the individuals in question (Mirel Mertiri and Klodian Zoto) on a private basis. For the dates specified by Mr. Bardhi, I made official trips. What you posted on Facebook today is a list of names with some data that don’t even include a date. I am pursuing a slander lawsuit against Mr. Bardhi in the Tirana Court.”