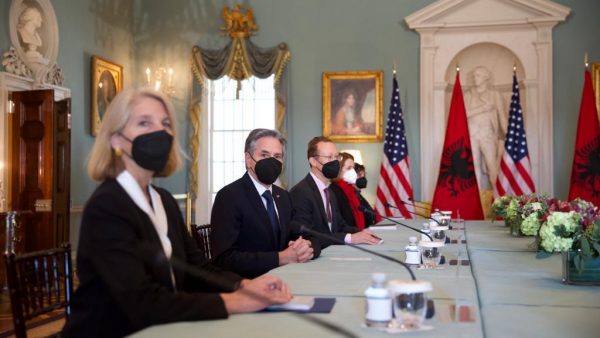 Prime Minister Edi Rama met with Secretary of State Antony Blinken on his visit to the United States of America, where he praised the two countries’ good relations, which are celebrating its 100th anniversary this year.

At the start of the meeting, the head of the Albanian government vowed that Albania would do all possible to sustain this friendship for a long period of time.

“It is an honor to be with you and a pleasure to meet you at the start of the year commemorating the 100th anniversary of relations between the two countries, which were brutally disrupted for more than half a century by Albania’s decision to go in a different direction, but here we are and appreciate this friendship. We will do everything possible to sustain this friendship,” Rama said.

Secretary Blinken also commended Albania’s assistance in various areas and did not leave without highlighting the government’s and Prime Minister Rama’s commitment to receiving some of the first Afghans fleeing the war.

“I’m delighted to welcome you to the State Department and to have the chance to discuss the work that the United States and Albania are doing together in a number of areas. In the United Nations Security Council, we shall literally sit next to one another. We are appreciative of the job we are doing together there. However, what I want to convey to you is that at the start of the summer, when we announced our intention to withdraw from Afghanistan, you were one of the first to accept their offer of sanctuary. What you did is a fantastic honor and demonstrates Albania’s kindness, for which I am thankful. We have a lot of difficult problems to discuss together,” Blinken explained.