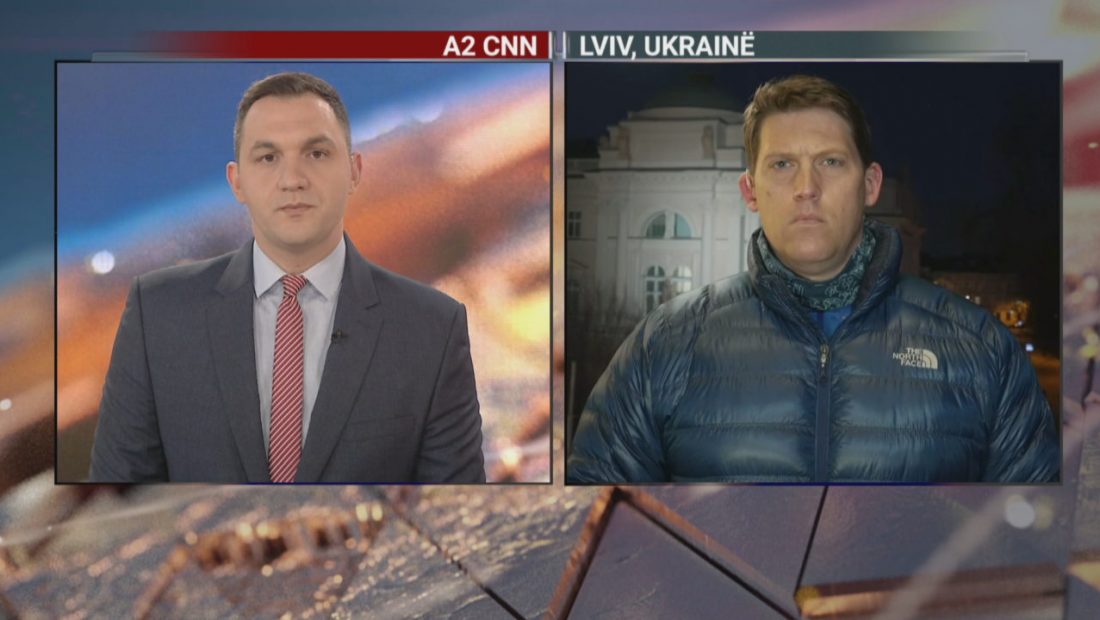 CNN reporter Conor Powell reported on A2 CNN in the Evening Diary on the current situation in Ukraine, where tensions have risen sharply and war seems to be on the verge.

Amid the threat that Russia could invade Ukraine this week, President Volodymyr Zelensky is trying to prevent panic from spreading and is seeking evidence that Russia intends to do so. Currently, is Ukraine more afraid or is it aware that it could be attacked quickly? What is going on there?

Conor Powell, CNN reporter, Ukraine: Here in Ukraine, in the areas we have visited around the country, there is a feeling of staying calm and moving on with life. What we have learned from senior Ukrainian officials is that, yes, they acknowledge that there is a large presence of Russian troops near their border in the North, East and South. But this is something that Ukraine has lived with for years, not to mention decades and centuries, which is Russian aggression in their own country. What we have heard from Ukrainian officials and citizens on the streets is that as long as there is no invasion they will not worry about it. At the same time, the Ukrainian government is seeking support from the United States and other NATO countries in the form of additional weapons, which have been sent to them so far. The Ukrainian government has received hundreds of millions of dollars in various types of weapons; everything from helmets, bulletproof vests, to the most advanced ones like javelin missiles and similar weapons. They also searched for highly advanced surface-to-air missiles to combat Russia’s air superiority. So while the government here is showing some sort of calm and demanding calm from its citizens, it is also making sure to get the weapons it needs from the west, from the United States to use in the event of an invasion.

During the phone call with President Biden, President Zelenski requested more military and economic assistance, but also invited Biden to visit Kiev. Is it likely to happen and why would it be important when we are not seeing results from diplomacy?

Conor Powell: We learn from the White House and Washington that President Biden will not be visiting here soon. But President Zelenski would very much like to see Biden’s counterpart here as a way to strengthen Ukraine’s relationship with the United States and NATO. Ukraine is not a NATO member country, but it would certainly prefer to be. And many in Western capitals whether in Washington, Berlin or London would like to see Ukraine as part of NATO to combat any kind of Russian intervention in much of Europe. But President Biden will not come here soon, at least not with this kind of threat from Russian troops or a Russian invasion. Is it something that could happen in the future, of course. U.S. officials say the visit could happen in the future, but it’s not something that is expected to happen in days, weeks or months. Interestingly, the last high-ranking official to visit Ukraine for the last time was Joe Biden, but as US Vice President under Barack Obama. But that happened 5 or 6 years ago. So it has been a long time since the last time Ukraine hosted a high-ranking delegation from the US presidency. They would prefer it to happen soon, but rumors from the White House and Washington confirm that a visit will not take place right now.

In terms of diplomatic measures, German Chancellor Olaf Scholz is currently visiting Kiev and Moscow in an attempt to de-escalate tensions. What is the purpose of the visit? Is there a chance for success?

Powell, Conor: What we can expect today is the continuation of the talks, as we have seen in the last several days, if not the last ten days. Whether speaking with Ukrainians in the region or with Western leaders, we have learned that dialogue is beneficial and reduces the likelihood of an invasion. Russia has frequently stated that troops stationed on Ukraine’s borders are conducting military exercises and are not part of an invasion army. Whether or not this is accurate, what we are hearing from Washington or Western authorities is that this force is far too strong, well-prepared, and near to the Ukrainian border to be a minor exercise. As a result, there is considerable anxiety. And with these discussions, and with politicians such as Chancellor Scholz visiting the countries, the assumption is that Russia will refrain from attacking as long as Chancellor Scholz remains in Ukraine or even in Moscow. This effectively prevents Russia from conducting any strike. Is this accurate? Nobody knows what Vladimir Putin is thinking at the moment. However, as long as there are negotiations and individuals are meeting, the hope is that we will spend the next few days buying time, continuing diplomatic talks, and possibly holding real talks to address Russia’s security concerns. Not only in Ukraine, but throughout Europe, US and NATO officials want to see Russian soldiers withdraw and to ensure that no serious attack occurs before addressing some of Russia’s concerns in Ukraine and throughout the area. As a result, it is a gambling game. It is ultimately subject to the whims of Vladimir Putin and his inner circle of advisers. All focus will be on what he does in the next days. Tomorrow, Chancellor Scholz will travel there, which is a positive indication for diplomacy.

Let’s focus on the situation on the ground. Russia’s army has surrounded Ukraine on three sides. What signals led American intelligence to conclude that the conflict will begin this week? They’ve even set a date: February 16, perhaps?

Conor Powell: Officials in Washington are concerned about this massive assembly of soldiers and their mission. It is estimated that there are between 100,000 and 130,000 Russian troops. They are situated in Belarus, close to Russia’s border with Ukraine, and in Crimea. Artillery, ammunition, armored vehicles, as well as floating and naval vehicles capable of transporting troops to Ukrainian coastlines, are all available. Therefore, what concerns the US and other NATO allies is that this is a major power. Now, Ukrainian officials assert that they have always faced this type of Russian force deployment along the border, and indeed, portions of Ukraine are held by Russian separatists. Many Ukrainians assert that they will remain unconcerned until they witness an invasion. However, the West, namely the United States, wishes to warn Russia before anything happens. That is why there is such a strong reaction: we know you are coming, we believe you are coming, and we believe you will arrive tomorrow. These are recent statements we’ve heard, and they’re attempting to predict any Russian invasion, as if to say, ‘we know what you’re preparing.’ According to Russian officials, this is a military practice, not an invasion. However, I believe US officials are attempting to depict a cohesive NATO force while simultaneously stating: we see what you’re planning and we will not allow it to happen. Vladimir Putin’s goals remain unknown. However, the signs the west is sending are highly worrying to them.

You are reporting from the city of Lviv, which is located near the Polish border. We are aware that diplomatic personnel are being relocated from Kiev. Is there a large number of foreign missions there?

Powell, Conor: We have not observed a dramatic increase in diplomatic activity with Kiev. We have seen some, but this is not yet indicative of an influx of diplomats. Diplomatic maneuvers have been more reserved. The United States and several other countries have participated. Other states have not relocated diplomatic personnel here. We were at Kiev airport yesterday, and there was no major exodus, nor were the streets swarming with diplomats departing. Several European airlines have suspended flights. Several more are still on their way here. It’s a kind of mixed motion. We’ve heard a lot about the departure of diplomatic workers, whether American or British, but we’ve yet to see a huge exodus. As long as these are diplomatic initiatives, no substantial departure of officials is anticipated.