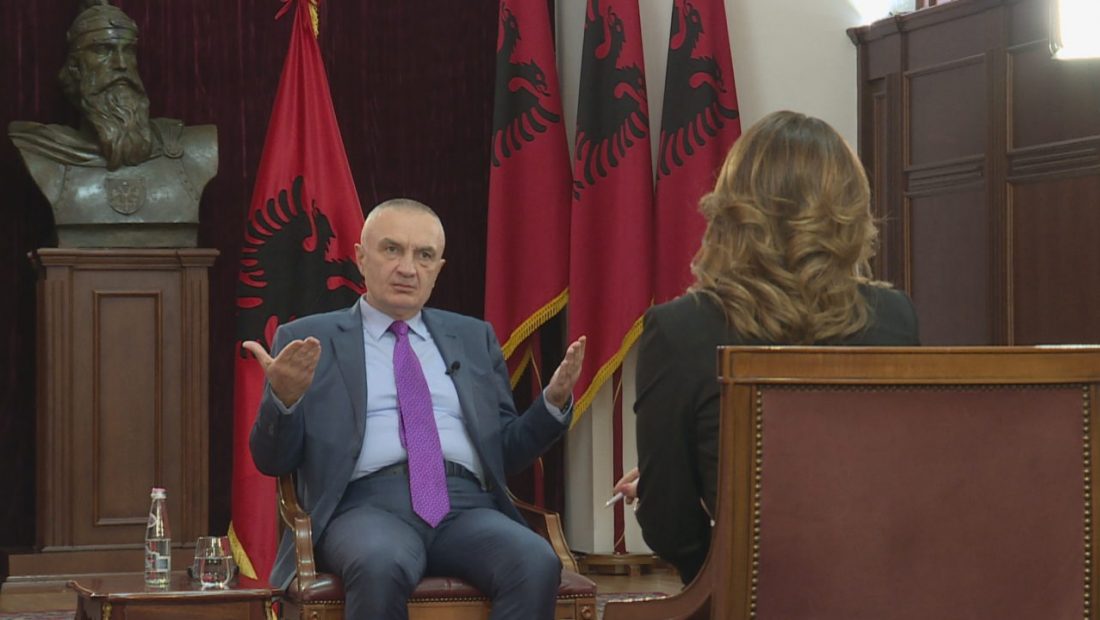 When asked about the increased price of energy and oil in “Interview with Merita Haklaj,” President of the Republic Ilir Meta called for an end to the “quiet compromise” between the country’s political players as a means of diverting attention away from real problems.

“I backed the industry’s statement; it was a very strong plea from an independent segment of civil society. Not just during this period, but also previously, I have consistently expressed serious concerns about the deterioration of our economy, which cannot be brushed aside by the government’s self-righteous rhetoric.

In this regard, I have requested an increase in the parliament’s role. Not just as a monitoring role, but also as an audit, in order to bring a stop to the market’s speculative situation. The long-standing silent agreement between political players aimed at deflecting attention away from pressing issues must come to an end. “Everyone has a responsibility to improve transparency,” the president stated.

Meta: Zero concerns about the Constitutional Court, attempts have been undergoing for three years with investigations and farce processes

Three years of investigations and sham processes have been conducted in connection with an article that no longer exists in the Constitution, which is for “agitation and propaganda.” It is their problem. It makes no difference to me. As for my job as President of the Republic, this is critical, since it is evident that they are doing everything possible to totally capture the state, which is the only institution that this majority doesn’t control right now.”

This is what President Ilir Meta stated while discussing the Constitutional Court’s procedure for his dismissal, which is expected to conclude next Monday.

Does Meta fear a decision to dismiss him? “I have never worried about what the Constitutional Court would decide in this case and never will. I believe that no citizen in Albania is unaware that this is a process based on agitation and misinformation.

“The Constitution makes it quite clear that the president may be removed only for serious constitutional violations. A significant violation of the Constitution occurs when the president compromises the country’s integrity, discloses a state secret to the benefit of enemies, or violates the interests of Albanians. To my mind, the essence of this entire process over the last three years has been this: Ilir Meta should be punished for thwarting the plans of those who are against our country, to violate Albania’s sovereignty and integrity, as well as the sovereignty and integrity of Kosovo, which we have a national obligation to protect. That is why I am unconcerned about their intentions,” Meta said.

Meta expresses gratitude to Berisha: “He came from the most distant areas and worked his way to the top.”

Meta expressed his admiration for Berisha’s accomplishments, stating that he came from the most isolated villages in the north and worked his way to the pinnacles of medicine, science, and politics.

“It’s an honor to make some observations about Berisha’s character. I’ve already stated that I have a soft spot for Berisha. I also informed Rama of my cooperation with him. His h uman interactions, Berisha’s life accomplishments… Let us not forget that we are talking about a person who came from the most isolated villages in the north and worked his way to the pinnacles of science, medicine, and the country’s democratic procedures. My ties are to the country, the national interest, and the Constitution. The deals we have been compelled to make are not just motivated by desire, but also by political realities,” Meta said.

On the eve of the Constitutional Court’s decision to oust him, Meta announces on A2 CNN his plan for a second term.

The Constitutional Court is set to rule on parliament’s request to dismoss President Ilir Meta on Monday. Meanwhile, in an interview with A2 CNN’s “Interview with Merita Haklaj,” the head of state declared that he is unconcerned about the conclusion of this procedure. He even revealed other plans, which he stressed he had until before April 25, when the last elections were held.

Ilir Meta told A2 CNN that up until that point, he had considered running for a second term as president and then entering the diplomatic arena.

“Since April 25, I’ve been anticipating July 24.” (when his term as president comes to an end). I had another plan earlier. I intended to serve a second term as president and then exit politics in order to pursue a new career in diplomacy. Always with the intention of limiting some of the damage done to the constitution, but also to the institution of the President in the future, not to Ilir Meta.

When asked if he wished to be re-elected for a second term, Meta stated, “I wished to be re-elected even three years ago, when the problem of renouncing parliamentary seats and also the crisis of municipal elections were created.  I have always maintained that the only solution is through voting. I respect the sovereign’s vote. My goals have shifted due to the severe blow to the Republic’s foundations. A fundamental change must take place here,” Meta said.

Meta: We have justice with commands; ministers who resisted it have been dismissed

Albania’s inclusion on the list of the most corrupt countries, according to President Ilir Meta, is a result of the seized legal system, which he claims operates with orders from above.

The Head of State cited the incinerators affair as a case in point, saying scapegoats are being created. He stated that as a result of this strategy, some ministers who opposed it had been dismissed.

“At this point, you may take and analyze the incinerators affair. 430 million euros from Albanian taxpayers’ money, and you will discover how this country is governed by a systematic criminal group. And they were denounced more than a year ago by Ilir Meta and other actors. However, investigations cannot be conducted in the council of ministers, where they should be, at the source of the problem.

“Ministers have been sacked as a result of their resistance to this affair and its illegality. Several justice ministers and directors have spoken out against it. It is everywhere, despite the fact that we have a system of justice based on commands. Scapegoats are created to protect the true authors of this corruption and kleptocracy,” Meta said during the Merita Haklaj interview.

Meta for Lulzim Basha: spoiled and used to receiving things already made, his political end is clear

According to Ilir Meta, Basha is a privileged man who is accustomed to receiving things already prepared, but he is entirely disconnected from reality, which is why his political end is evident. For Meta, Basha is not a leader.

“He is used to getting things handed over to him, he is accustomed to receiving gifts, and he has his mind set on it. He is spoiled and oblivious to reality, and his political end is evident. A person who has betrayed every cause he has ever supported. A person who has dragged the nation back years by annihilating the opposition and functioning as a facade, at times via his phony fanaticism and at others by direct collaboration with the governing regime. As I have stated, he is not a leader,” Ilir Meta declared.

President Ilir Meta discussed, among other things, the moment when he was elected President, in “an interview with Merita Haklaj”.

“To be consistent, when Edi Rama suggested me, the opposition had entered the protest tents at the time. I was attempting to reach an agreement and have the President elected by the opposition and by popular vote. However, Mr. Rama stated in 2017 that there is no better candidate to preserve the opposition’s rights than Mr. Meta. Undeniably, he was correct. Even as Speaker of Parliament, and despite my coalition with Rama, I upheld the opposition’s rights in Parliament to the fullest extent possible,” Meta said.

Rama had no cause to be disappointed later, according to Meta. “As I stated in Parliament upon election, I intend to remain Ilir Meta, the December ’90 student. I pledged that if forced to choose between power and democracy, I would chose the latter. I have devoted my entire life to promoting democracy and political pluralism.

“We have obvious disagreements with Rama,” Meta: “He has breached Albania’s and Kosovo’s national interests.”

President Ilir Meta discussed his relationship with Prime Minister Edi Rama in an interview with A2 CNN journalist Merita Haklaj.

Meta stated that Prime Minister Rama has breached Albania’s and Kosovo’s interests and sovereignty, and their disagreement on this point is quite evident.

“Mr. Rama has breached the Albania’s and Kosovo’s sovereignty. It has violated the Albanians’ and the state of Kosovo’s national interests, and of course, we have very obvious divides on this point. I do not build morally incompatible relationships with anyone for ideological reasons, because political ideas are everyone’s right. When national interests are breached, I am straightforward and uncompromising,” Meta told A2 CNN.