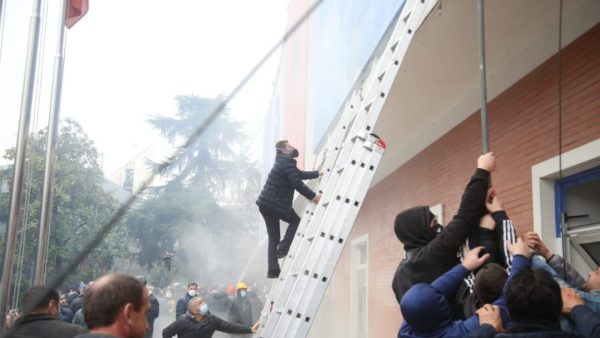 Many supporters responded to the call of former Albanian Prime Minister, Sali Berisha, to protest in front of the Democratic Party headquarters after they were not allowed to enter one day ago.

The protest turned violent and required the interference of the police, which used tear gas to disperse the crowd and protect the Democratic Party members who were inside, supporters of the incumbent leader, Lulzim Basha.

Sali Berisha, a former DP leader and one of the party’s founders, held a national assembly with thousands of DP members on December 11th, in which they voted to oust Basha as a leader. This move came after the latter suspended Berisha from the Parliamentary Group of the Democratic Party when he was declared non-grata by the US State Department over corruption allegations.

Basha ignored Berisha’s assembly and convened another a week later, on December 18th. In this Assembly, Basha dismissed Berisha from the party. Berisha and members of the “Reestablishment Committee”, which aims to oust Basha and replace the leading structures of the DP, warned Basha to leave the premises of the DP headquarters by January 5th. After their calls were ignored, Berisha’s followers attempted to enter the Democratic Party HQ on Friday, January 5th, but they were not allowed by the security staff led by Lulzim Basha, the incumbent leader of the DP, who had changed the locks and reinforced the doors.

Berisha called a protest this Saturday, January 8th 2022, and his appeal received the response of hundreds of supporters. They gathered in front of the Democratic Party HQ and attempted to get inside, but were not allowed by members and the security staff.

A few minutes later the protesters attempted to enter the building by using ladders near the windows but were received with tear gas from the security staff that was inside the building.

As the situation grew more violent, with solid objects thrown to the windows and tear gas being fired from inside the building, Democratic Party representatives who were inside the building called on the authorities to intervene as the lives of top DP leaders were being put in danger.

“Sali Berisha is endangering the lives of dozens of Democrats with acts of violence, with mercenaries who are attacking the DP building, putting at risk the lives of top Democratic Party leaders. The law enforcement institutions must stop the bloodshed. We call on the institutions to intervene and avoid the possible victims of Sali Berisha’s violence”, the DP declared in their statement.

Police intervene and disperse the crowd with tear gas

After this declaration, the Police interfered to disperse the crowd with tear gas and water cannons, meeting some resistance which led to several arrests and some injuries.

The Police declared in a press release that their structures were engaged to guarantee public order and security, without being involved in any action against the Democratic Party during the protest.

Democratic Party, Albanian President, US and EU embassies react to the protest

The vice leader of the Democratic Party, Enkelejd Alibeaj, reacted on Twitter by saying that Berisha is inciting violence and bloodshed among the supporters of the same party, using violence against anyone who has different opinions.

The President of Albania, Ilir Meta, reacted after the violence in front of the DP headquarter by asking all parties to respect the right of a peaceful protest as a fundamental democratic principle, and avoid any act of violence.

The US Ambassador reacted with a post on Twitter by expressing the deep concern of the USA regarding the tensions at the DP headquarters and appealing to the organizers to restrain from violence. “Those who incite violence and undermine the rule of law are to be held responsible”, the US Embassy stated.

The EU representation in Tirana also reacted with a press release by condemning the violent acts and inviting all parties involved to restrain from violence. “Albania’s EU path needs a solid opposition that contributes with the country’s reforms, responding to the aspiration of the Albanian people to see Albania in the EU”.

Berisha accuses DP leaders of using violence against peaceful protesters, as DP leaders compare his protest to the one called by Edi Rama on January 21st

Sali Berisha declared from within the protest that their demonstration was peaceful and that the protesters were being stopped by force from entering the building of their own party. “Those who use tear gas and violence against the protesters will be held accountable”, the former Prime Minister declared.

The Democratic Party reacted with an official statement by declaring that Sali Berisha was behaving the same way as Edi Rama did on January 21st, 2011. On that day, the opposition led by Edi Rama organized a protest in front of the Prime Minister’s office, then led by Berisha. The demonstration turned violent and four people lost their lives.

“Berisha has been abandoned by the Democratic Party supporters. He is attempting to take the building with 800 mercenaries. These acts mark the final isolation of Sali Berisha and his shameful ending of a political career”, the DP declared in their statement.

The vice leader of the Democratic Party, Grida Duma, reacted with a video on social networks as the violence was still undergoing. She considered this an unacceptable scene in the protest that was organized by Sali Berisha.

“We were expecting the DP members who are outside to come inside and negotiate with calm. Violence must receive punishment so that the Democratic Party can have a future that should be far from the violence that we saw today. The Democratic Party supporters outside the building are being manipulated, and we are going to shake hands with them once again. I distance myself from Sali Berisha’s violence. He said that there would be no violence, but we are seeing traumatized women in here”, Duma declared a few minutes after leaving the Democratic Party HQ.

Berisha announced the protest closed for the day, but declares that this is only the beginning

After the crowd was dispersed, Sali Berisha and his close supporters left the site and seemingly moved towards the Prime Minister’s Office. However, they returned a few minutes later and made a second attempt to enter the Democratic Party HQ, but this time they were stopped by the police without being able to reach its doors.

After announcing that the demonstration was closed for the day, Berisha declared to the media that this protest was just the beginning. “This is the real opposition, standing tall. I guarantee the Albanian people that we are undefeated in protecting the values we trust and protect. This was a scenario that was prepared carefully during these days. Nothing bad happened against the Democratic Party MPs, except for Lulzim Basha who is being kept hostage by Edi Rama. This movement cannot be stopped. I guarantee you that this is only the first page. These are the Albanians of freedom. Those who think that they can keep us hostage, are making a big mistake. The Albanian people and the entire world saw today the real face of Lulzim, the hostage, who used thuggish methods to defend himself. He used the methods used by Edi Rama’s drug lords”, Berisha declared.

After Berisha and his supporters left the street in front of the DP headquarters, an expert group from the Prosecution arrived at the scene for thorough investigations. Specialists were seen collecting evidence from the site, as the team was led by the Chief Prosecutor of Tirana, Elisabeta Imeraj.

The Chief of the Tirana Police declared that the authorities will not keep guarding the building of the Democratic Party headquarters, while they announced that they are following all the necessary steps to bring to justice those who were responsible for today’s violence.

The Albanian Prime Minister, Edi Rama, reacted on Instagram by posting a famous quote from a Hollywood Western movie, played by John Wayne: “Life is hard, but stupid people make it even harder”.