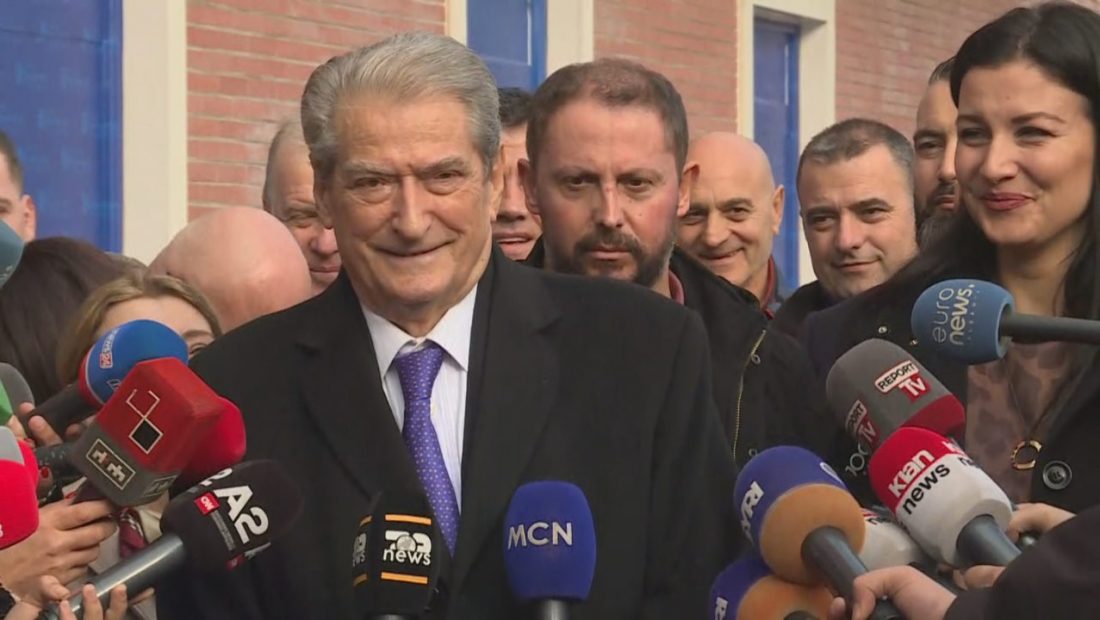 Sali Berisha, a former DP leader and one of the party’s founders, held a national assembly with hundreds of DP members on December 11th, in which they voted to oust Basha as leader after the latter suspended Berisha from the Parliamentary Group when he was declared non-grata by the US State Department over corruption allegations.

Basha ignored Berisha’s assembly and convened another a week later, on December 18th. In this Assembly, Basha dismissed Berisha from the party. Berisha and members of the “Reestablishment Committee” warned Basha to leave the premises of the DP headquarters on January 5th, but when his followers sought to enter the Party HQ, the doors were barred.

Sali Berisha, flanked by supporters and members of the Re-establishment Commission, arrived at the Democratic Party’s headquarters on Friday. Berisha said that Basha was treating the Democrats’ headquarters as personal property.

“These are the scenes of a man who goes from scandal to scandal, from bad deeds to shameful acts, of a man who demonstrates that he hasn’t left even the tiniest particle of moral and political character, civic integrity,” Berisha added.

“There are no armed people among us, and there never will be. We can not enter to use violence against anyone, except for the mercenaries of Basha whom I warn to leave the building. We’ll take Basha out of the office gently.”

“Can anyone think that a previous leader would end his political career, rather than accepting the verdict of 44 thousand party members, by turning the PD headquarters into a bunker, prohibiting Democratic Party MPs from entering, and filling the headquarters with criminals?”

“I encourage all Democratic Party members, 44,400 of them, as well as those who were unable to vote in the referendum, those who signed the dismissal of their former leader, to band together and take the control of their own home. I can assure all of the workers in this building that the demonstrators have no animosity toward them. The only issue they face is unlocking the house’s doors and, of course, releasing Edi Rama’s hostage.  Tomorrow I call on all Democratic Party MPs to unite here and not stay a minute longer with a man who converted the party they trusted into a party of blinds, prisons, bunkers and locks.”

Berisha and his supporters have been labeled “the non-grata association” by the Democratic Party’s General Secretary, Gazment Bardhi, who represents the group led by Lulzim Basha.

Bardhi justified the postponement of his appearance for the media with Berisha’s visit.

“We made sure to provide enough room for the ‘non-grata association”s daily tour. Democrats and Albanians have been receiving a steady stream of lies from Sali Berisha since September 9”, says Bardhi.

Berisha, he continued, had warned of violence at the protest on Saturday.

“Today, he announced acts of violence against the Democratic Party’s headquarters”, Bardhi remarked. “However, unlike Basha, Berisha was followed to the DP by persons convicted of murder”.

Basha: Berisha will use violence, he has lied to you about not being part of the decision-making in the DP

“Sali Berisha has deceived youwith his fabrications and ridiculous fabrications about the reasons why it was declared ‘non grata’ by the US, at a time when the motivation has been and is clear to anyone who does not want to be lied to,” said the Democratic Party’s leader in a statement to the media a day before the protest called by Sali Berisha.

“Sali Berisha has been lying to you by excluding himself from the DP’s most important decision-making during our eight years in opposition, while he has been part of the decision-making, even preceding them with media statements, and with its protagonism with the PD’s elected institutions,” Basha declared.

“Sali Berisha has launched a demonstration against the Democratic Party, which in fact is against the United States, because of his personal troubles. There comes a time when you’ve had enough”, Basha added.