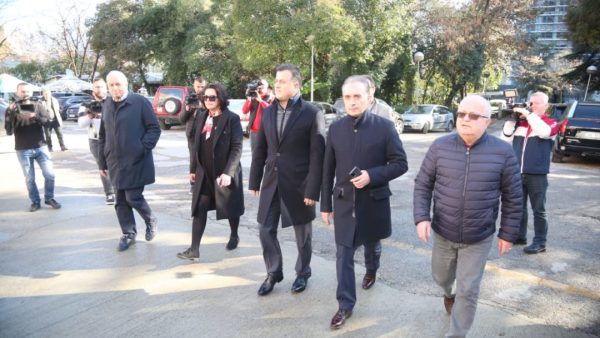 Members of the Democratic Party who support former PM Berisha accused the incumbent DP leader, Lulzim Basha, and PM Edi Rama, of turning the DP headquarters into a prison, after finding the doors locked on January 5th, the date when they expected Basha to leave office.

Former DP leader and one of its founders, Sali Berisha, held a national assembly with the DP supporters in which they voted to oust Basha as leader, after the latter suspended Berisha from the Parliamentary Group after he was declared non-grata by the USA over corruption allegations.

Basha didn’t recognize Berisha’s assembly and held another one a week later, dismissing Berisha from the party. Berisha warned him to leave office on January 5th, but his supporters found the Party HQ doors locked as they tried to get inside.

“We came to the headquarters, to our house, to hold a discussion and a meeting about the parliamentary group’s and PD’s plan for 2022.  Today, the PD would have to be a happy place for all Democrats to congregate. Unfortunately, Edi Rama has transformed it into a modern-day Alcatraz with his commitment. Everything is armored and closed doors, as if the DP has turned it into a high-security jail.  This is horrible, disgusting,” stated former Interior Minister Flamur Noka as he and several other DP MPs attempted to enter the headquarters and found all the doors locked.