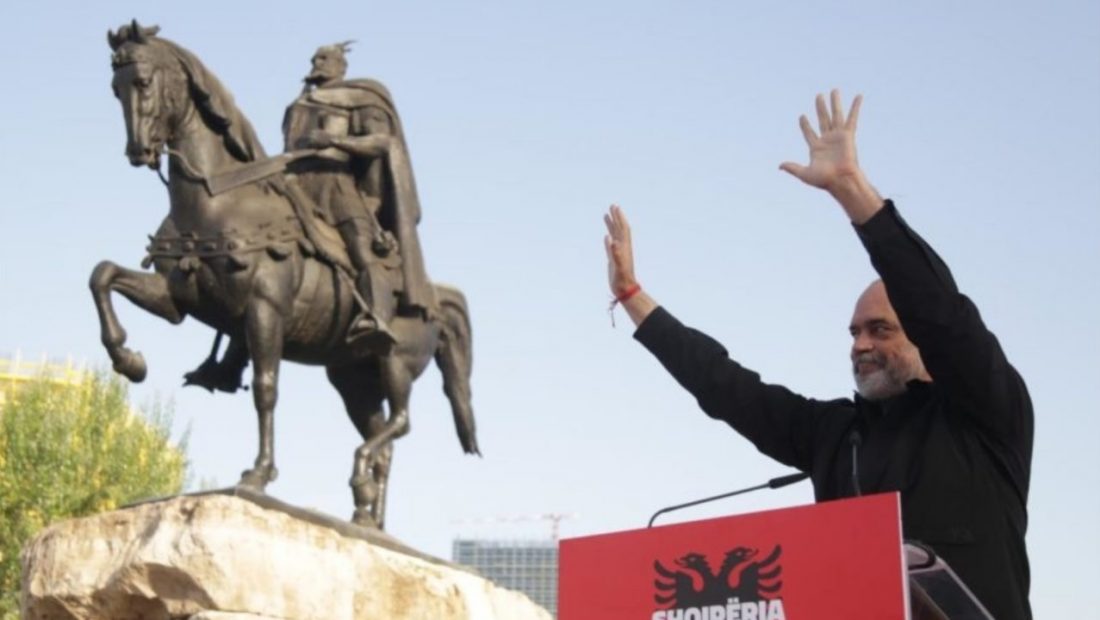 In Albania’s history of pluralism, no government had ever won three consecutive terms, and to commemorate this, socialists led by Edi Rama gathered in Tirana’s “Skanderbeg” Square, with the leader not sparing praise for his own people.

“In the same way that you were by my side on April 25, I will be available to you at all hours of the day and night for the next four years. This triumph was won by the SP, the most democratic force Albanians have ever formed for the country. Happy victory because it’s all yours. But never forget, never forget, that this victory must be earned every single day of the next four years; we must work tirelessly for the Albanian people at all hours of the day and night.  With commitment and respect for all, regardless of who they voted for”, Rama addressed Socialists after the victory of April 2021.

After winning, Rama promised that his administration will continue to work, particularly in two areas: the Covid-19 pandemic and reconstruction, both of which he promised during his second term.

“Albania is far too small to fail to achieve the status that Albanians deserve. Albania can be made, and we, the Albanians of this decade, will be the ones to do it. We will continue work tomorrow with renewed vigor, fueled by the complete and speedy healing of all earthquake wounds and the expulsion of the unseen enemy (COVID), to combat the enemy within us, which draws us down a path of division and strife. Albania triumphed on April 25, and now it is our turn to triumph every day for Albanians everywhere. May God show us patience, and may we show patience to one another. Long live the SP, as well as the young and old Albanians who were born in the country. Long live Albania!”

Rama extended a hand of collaboration to Basha as a victor, while arguing his position on the basis of the country’s common interest.

“My advice is to accept the loss with dignity and the knowledge that you done everything you could to avoid it. We are better, and you are the best behind us, Democratic Party friends; this is a fact, and facts are accepted, not fought. It is not up to me to decide how you will accept it, and it is not our job or right to do so. It’s up to you whether it’ll be Basha in the following four years. We are, however, our own adversary, with or without Basha. Without prejudice, we extend a hand of sincere and concrete cooperation. We are not divided by major goals. We desire EU integration, but we won’t get there any faster if we create a gap of slander and hate in which we attack each other.  Both socialists and democrats want to enhance the economy and prosperity, but we won’t be able to do so if we fail to communicate effectively.”

Rama’s approach was not the same for Berisha and Meta. Rama ousted President Meta in the Assembly in June, citing a constitutional violation, with a legislative majority. On June 12, three days after the decision, the Socialists assembled in the National Congress, where, despite several key organizational decisions, the focus was on the resignation of Edi Rama’s right-hand man in the party, Gramoz Ruçi.

The summer had been quiet for the Socialists, but not everyone was in the same mood on September 2, when Rama called the Party’s General Assembly. Women made up the significant majority of the government, occupying 12 of the new cabinet’s 17 ministries, with only 5 men. Edi Rama named Arben Ahmetaj as the second-in-command, reaffirming his faith in the former Minister of Reconstruction, who has held prominent roles in the Socialist administration throughout his career.

Rama reserved the biggest surprises for the changes in the party. Only one of the Socialists’ ten secretaries remained, and he received the most crucial role, that of Secretary General, replacing the most popular MP, Taulant Balla.

Taulant Balla was dealt a second blow when political leaders in local counties were replaced. His transfer from Elbasan to Fier not only weakened the voting power in which he had invested for many years, but it was made even more unpleasant when his replacement was Damian Gjiknuri, who also just became Rama’s second man in chanrge.

The president, who was ousted by the Socialists, mandated the new administration without controversy, but the difficulties remain the same. Even among Socialists, there are differing perspectives on the importance of a third consecutive term.

“There are numerous obstacles that are tough to meet since they are global challenges such as pandemics, economic issues, as well as some problems such as the earthquake, and another challenge: how to persuade Albanians to stay in the country and see the future here. We want the justice reform to succeed since it is still falling short of our expectations. There’s also the attraction of investment, the issue of property, and other issues that have created a vicious spiral that requires extreme caution. The image of the country is also a sharp issue, both in the European public opinion and in the neighboring countries. To reverse this image, you’ll need to put in a lot of effort. And none of these can be achieved without opposition and public participation, as well as Albanian integration into the EU,” Arta Dade said in response to the SP’s third term, invited to” Absolut 4.” “, on CNN’s A2.

The public’s attention was drawn to the Democrats’ internal dispute at the start of the third term, thus the Socialists were able to continue their rule without interruption, at least until mid-December, when former Minister Lefter Koka was imprisoned for a corrupt affair. He is suspected of making millions of euros from incinerator bids, but the Socialists promptly distanced themselves from their former minister, claiming that he acted on his own and must carry personal responsibility for his actions.

The attention focused on the former minister’s case faded fast personal data leaked for more than 600,000 Albanians, showing their salaries, phone numbers, vehicle plates and ID registration numbers, turning into the issue of the day in the country’s political debate. Besides a formal apology, the government refused to accept any responsibility in this instance.

December should have been a time for accountability, both for Edi Rama’s executive and for the 100 days that he gave Damian Gjiknuri before trusting the new party secretariat. The public’s attention was drawn to the opposition’s internal matters, allowing Edi Rama to keep the plans he made in Villa 31 for himself, already accompanied by a calm that few remember to disrupt, or to remind him of his enormous obligation to the citizens to make transparency.