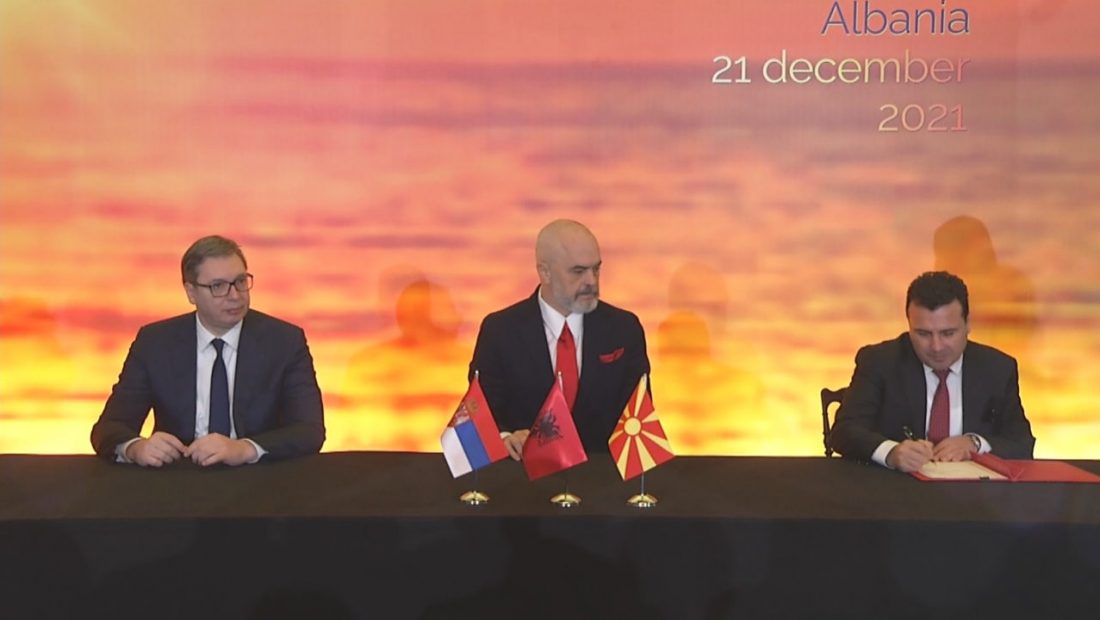 Albania, Northern Macedonia, and Serbia inked agreements today in Tirana that will take effect in January 2022.

“We’ve signed a series of agreements that mark the end of a collaborative effort. These agreements will become a reality the next day. Not in the distant future, but with the start of the year 2022. The agreement on the free labor market, which guarantees that all citizens have the same chance and right to work permits and residence. The agreement for an integrated electronic system of services opens the way for the construction of a shared electronic system that will allow citizens to register as if they are in another nation or their place of employment from the moment they apply. They can accomplish this from the comfort of their own homes, using smartphones and computers. All those who have been interacting between these countries as manufacturers, exporters, and importers of products for years, and who have a difficult history of waiting, queuing, and verifications, will finally be able to benefit from these agreements. Starting on January 22nd, it will be allowed to cross freely to the various customs and borders without having to submit the same documentation three times. It’s worth noting that the deal allows for the first time the export of livestock goods, including live animals, to be opened.

In his speech, the prime minister emphasized that these agreements demonstrate that the “Open Balkans” project, which is backed by the US and the EU, is advancing the Berlin process.

“That is why we have joined this project and declared it as comprehensive, and why we do not hesitate to encourage all three other regional parties to join us in any circumstance.  For the benefit of each partner and the population of each of the six nations, in order to progress the Western Balkans’ economy and society. Today, Commissioner Varlehyi indicated unequivocally that he supports the Open Balkans and welcomes the other three countries to join, and as you may have seen, the commissioner expressed remorse over the failure of the common market, which he described as “a test constructed on consensus.”

While encouraging the other three nations to join the initiative, Rama stated that the goal of the February summit in Northern Macedonia will be to remove tariff obstacles.

“The idea is to provide all participants the option of walking at their own pace. Only by taking control of our own destiny can we make as much progress as possible. Support for the effort has grown, both from the US and from the European Commissioner, as the program’s goal is clear: to create for our region a space where citizens can enjoy the four EU freedoms, commodities, capital, and services. We will meet again in Northern Macedonia at the end of February to advance this process, and after the removal of barriers for exporters and importers, we will address the removal of tariff barriers. Our goal is for the Balkans to have no borders, for goods, capital, and services to move freely.

Rama: Italy, Greece and Hungary will be invited to the Open Balkans initiative in the next six months

“We have agreed to invite Italy, Greece, and Hungary to the “Open Balkans” summit in the next six months. Free trade with the region alone is not enough, because we have understood that there should be less hurdles for traders even when they come in the EU. We will approach EU nations and attempt to create a regional common market that is linked to the European common market “, Rama stated.

“Who can trust us if we tell them we need EU facilities but don’t prove by our actions that we can live up to the EU standard of conduct? The open Balkans not only benefit individual countries economically, but also assist us in our quest to join the European Union “, the Prime Minister stated.

Vucic: I want you to see Serbia as your second home

Serbian President Aleksandar Vucic has rejected that the Open Balkans program has anything to do with Serbia’s expansionist goals or regional hegemony.

“I am really pleased with the agreements we were able to sign today, since they represent the culmination of a two-and-a-half-year effort.  We worked hard to get the word out about these deals. I noticed that they were against Rama’s initiative, but those who talk about a Greater Serbia or a Greater Albania, I assure you that this has nothing to do with it. Let us not get lost in these discussions of the past, because we will not be able to do things for the future. We want people to come to our cities, Albania’s lovely coast, and Northern Macedonia’s lakes. I want you to regard Serbia as your second home, because we want to feel the same way when we visit Albania and Macedonia,” Vucic said during a joint press conference with Rama and Zaev in Tirana following the signing of five agreements.

The Serbian president extended an offer to the leaders of Kosovo, Montenegro, and Bosnia and Herzegovina to join the effort, but stated that the program’s fruits will be seen in Serbia, Albania, and Macedonia. ” That’s why I get frustrated with myself sometimes,” Vucic continued, “because weare constantly calling on our counterparts as if we couldn’t exist without them.”

Zaev: When the EU fails, we have the obligation to take European initiatives

In a joint press conference with Prime Minister Edi Rama and Serbian President Aleksandar Vucic, Northern Macedonia’s Prime Minister Zoran Zaev said, “The open Balkans is a process developed for the benefit of the entire region and open to all of its countries.”

“All of these countries are being invited to communicate with one another and grow economically. “Today, we provide real actions in front of our compatriots,” Zaev remarked, “and we urge for contributions so that the project succeeds.”

“We decided that skepticism would not be tolerated in our respective countries. In this perspective, the open Balkans make a significant contribution to EU values alignment. When the EU fails, we have an obligation to take European initiatives. We are committed to our plan of tighter integration with the EU,” Zaev said. “However, the open Balkans has garnered support from our countries’ chambers of commerce, who agree that this is the initiative the region requires.”

“When you are originally from Hungary, as I am, it is simple to be a friend of the Balkans. To be honest, I was enthusiastic about this venture, which was initially known as Minischengen, but it was regrettably shelved. In the meanwhile, I believe the Open Balkans is a worthy successor. The region aspires to be a complete entity. I like how passionately you believe in this program and how you have persisted to push it because you recognize the value of regional integration. This is the most important message the region can send.”

The Commissioner asked Montenegro, Kosovo, and Bosnia and Herzegovina, which had previously rejected the plan, “to join this effort, because it not only provides prospects for businesses, but it will also improve the realities on the ground.” “Only through concretizing the regional market will the Western Balkans’ gross domestic product expand by a third.”

“Without this cooperation, the Economic and Investment Plan will not be able to provide all of the benefits it promises,” he adds. ” We are offering an investment of at least 1/3 of the GDP in the region, but it will only work if everyone participates. “It’s critical to demonstrate to the rest of the world that when you pledge, you keep your word,” he told Macedonian Prime Minister Zaev, adding that he understood his dissatisfaction with the EU accession negotiations.

“I regret that the First Intergovernmental Conference with Albania and Northern Macedonia has not yet begun; the time has come.”

Sali Berisha, the former leader of the Democratic Party, claimed yesterday’s protest against the “Open Balkans” had a “broad world resonance,” while also criticizing police maltreatment of detainees.

“For the past eight years, the national interest has been neglected. While the resurrected Democratic Party demonstrated yesterday that the national interest is well-represented. This is a protest against the tripartite alliance of Serbia and its vassals, which is pulling the Balkans from Europe and creating Serbian hegemony in the region, turning the region into a Russian sphere of influence. These are the main reasons for our protest, which resonated around the world,” Berisha stated.

“I strongly condemn the narco-police’s brutality in arresting and mistreating teenagers and other innocent people. I warn the narco-police that human rights violations and inhumane treatment of protesters will not be tolerated by our nonviolent movement. Last night, until 1 a.m., 15-year-olds, as well as 84-year-old adults, were held in police station cells. The captives have been mistreated by Commissariat No. 2 “, the former prime minister added.