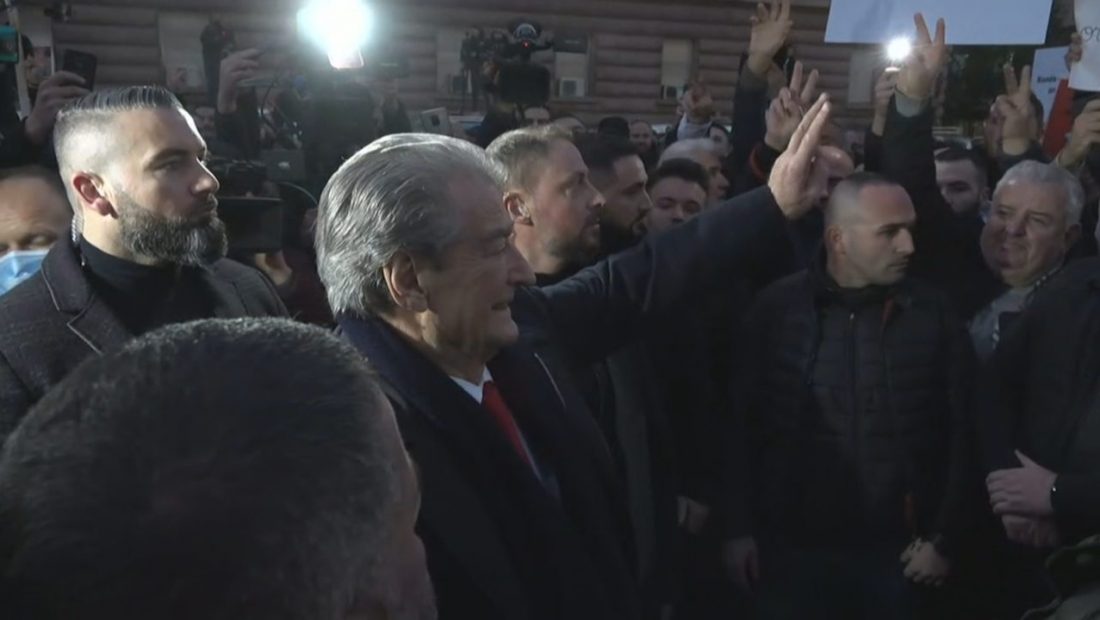 Sali Berisha’s protest against the Open Balkans initiative and, in particular, against Serbian President Aleksandar Vucic, has begun in Tirana’s center.

The march then began from the PD headquarters to the Prime Minister’s building, where a large crowd had assembled.

Berisha declared today’s protest in the Democratic Party’s national assembly on December 11, despite having previously spoken out against the initiative. Berisha even believes that the United States of America has declared him “non grata” because of his opposition to the Open Balkans and the modifications to Kosovo’s borders.

Berisha had earlier in the day highlighted four reasons why people should protest the Open Balkans in a Facebook status.

“1. Vucic is Milosevic’s minister. He has yet to apologize for Serbia’s crimes against Albanians, and he continues to follow his boss’s agenda!

Police engaged to offer security during the protest

To ensure the smooth functioning of the protest, a large number of police officers were stationed surrounding the prime minister’s building, as well as water trucks. Although he has openly held the same opinion on the Open Balkans, Lulzim Basha will not be present at this protest.

Rama, Vucic, and Zaev, in an open letter, urged neighboring countries to join the initiative for the benefit of their citizens, casting doubt on Europe’s lack of concern for our region, making cooperation all the more necessary.

At border crossings, exporters and importers from nations participating in the “Open Balkans” program will have one less problem. This convenience comes as a result of the signing of an agreement that allows the Region’s countries to recognize each other’s veterinary certificates and laboratories.

Despite the fact that the agreement is presently only on paper, it is intended to enhance trade between the Western Balkan countries. Traders will continue to face long wait times until the agreement is transformed into an actual act, particularly at Albanian customs stations.

According to data from the Southeast Balkan Free Trade Agreement, a truck spends an average of 3 hours and 20 minutes waiting and processing at customs entrance points in Albania, a huge difference from the second nation, Montenegro, which is even further away from Kosovo.

Melihate Termkolli, a former Democratic League MP, took part in today’s protest organized by Sali Berisha against the Open Balkans, with the next conference expected to be held in Tirana today and tomorrow.

“The Open Balkans herald the birth of a new Yugoslavia. It’s Vucic’s latest attempt to put his plans into action. However, this will not occur, which is why Kosovo is a stronghold,” Termkolli remarked. “Vucic is one of Milosevic’s harshest critics; he blames him of failing to complete the genocide against Albanians by failing to hurl them into the sea and seize Kosovo.”

She also stated that there are some followers of George Soros in Kosovo who believe that Kosovo can accept the Open Balkans provided Serbia acknowledges Kosovo’s independence, but that this would never happen.

She stated that Albania has two leaders, Dr. Ibrahim Rugova and Dr. “Sali Berisha,” as well as a historical leader.