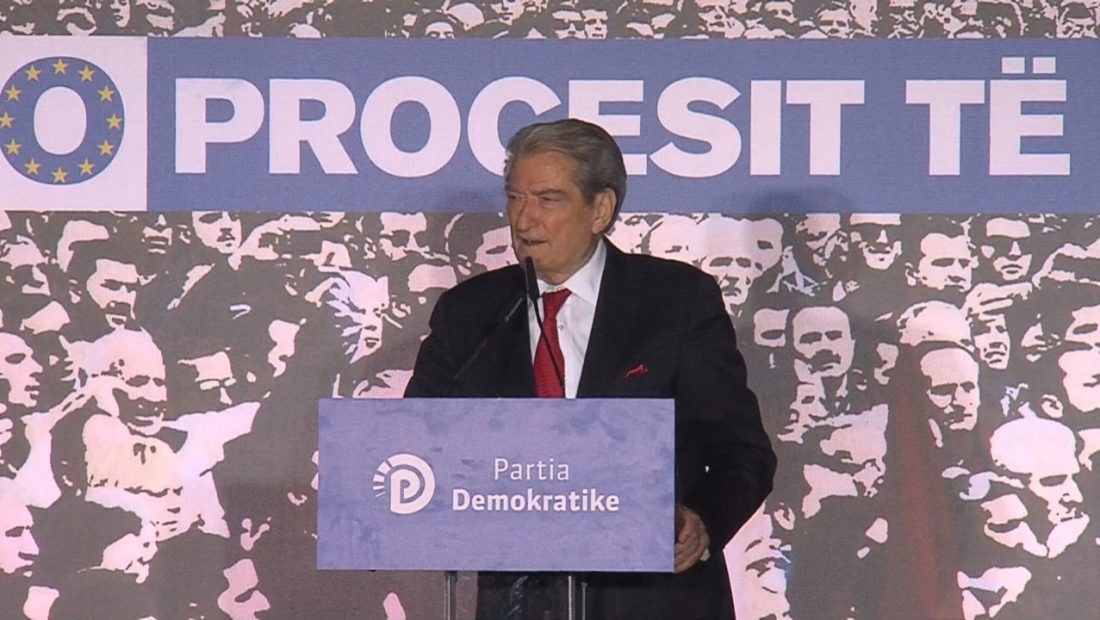 A large number of residents heard Sali Berisha’s appeal to protest against “Open Balkan.” The former Prime Minister went to the party headquarters to direct protesters to the “Deshmort e Kombit” boulevard rather than getting inside.

At the rally held beneath PM Edi Rama’s office, 9 speakers were picked to give speeches. Among them was also the Kosovo Democratic League party MP, Melihate Termkolli, and the former minister of the SMI, Ylli Manjani.

The spirit of the leader was evident in the charging of the crowd. The former prime minister named those he believes are conspiring against Albania.

“As Albanians, we are protesting in this square because Vucic and Rama have surrounded Kosovo with the MiniBalkani project.  They aim to destroy its independence,” Berisha stated.

He had narrowed his comments to Edi Rama, making another another threat from his position.

“This hurricane isn’t going to let up.  As a result, I caution Rama: do not confront them! Do not believe that the majority will be oppressed your minority. T here is nothing that can stop us. I appeal you to stand firm for the infinite series of other protests until we free Albania from the narcotics state,” the former prime minister declared.

For 90 minutes, the demonstration went off without incident, with the exception of the burning of the Serbian flag.Be

Berisha  that once they took power, the Open Balkan project would be removed from official Tirana because it posed a national security threat.

“I assure our Albanian and international friends that this is not a demonstration against regional cooperation.  This is a demonstration against a project that is detrimental to the interests of all Balkan countries except Serbia. Bosnia and Herzegovina, Montenegro, and Kosovo have all rejected it, while Croatia has labeled it as a “threat.”

“History has demonstrated that the idea of Serbian hegemony in the region has been one of the biggest disasters in history,” Berisha says. ” This is not in our country’s best interests. Initially, the effort changed the maps by removing Kosovo as an independent entity. The project was then renamed the Open Balkans in honor of the author of Open Society, who did not hesitate to advocate for Kosovo’s division. I’d like to point you that the Open Balkans has a godfather, and his name is George Soros, a millionaire.  Let me urge the US Congress and government to put an end to political efforts in the Balkans that are duplicative of US policy.”

“The project has enveloped Kosovo in a hostile force, and they aim to destroy its independence,” Berisha stated.

Sali Berisha branded Vucic’s Serbia as a menace to peace and an ally of Vladimir Putin during his speech at today’s demonstration against the Open Balkans, more so than when dictator Slobodan Milosevic was in control.

“Our protest is in support of Albania’s European aspirations. Vucic arrived as the leader of the Trilateral Alliance of the Open Balkans. But such a person will never be welcomed in Tirana, because your nord is Moscow, and the vision of Serb greatness that lies behind your proposal is to convert the region into a zone of Putin’s influence.

“Vucic’s Serbia today, more than it did under Milosevic, resembles a little Russia, posing a threat to peace. They must apologize rather than deny the atrocity in Srebrenica. They must accept responsibility for the crimes committed against Albanians.”

Berisha told Prime Minister Edi Rama after the first demonstration, which occurred after the December 11 Assembly and the referendum on Basha’s dismissal, that further protests would follow until the dismantling of the “narco-state,” as the former prime minister describes it.

As regards the case of incinerators, Sali Berisha stated that the 430 million euro scandal involving Edi Rama’s company could not be resolved with 3 million euros stolen by Lefter Koka.