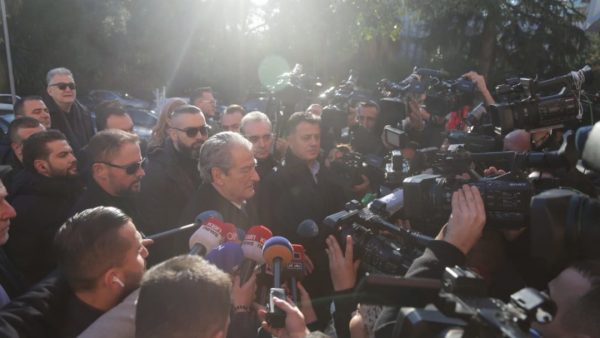 Monday afternoon was undoubtedly one of the most bizarre in the Democratic Party’s and Albanian politics’ history.

Sali Berisha and his followers arrived at the DP headquarters shortly after 13:00, where they held the first meeting of the party re-establishment commission, which was constituted by the national assembly on December 11. They convened in one of the building’s halls, just a few meters away from another hall where Lulzim Basha was holding a meeting with the working group for the party’s Youth Forum elections.

Berisha claimed in a press conference after the short meeting, which was held on foot because the chairs were missing, that Basha had already been dismissed, but that the consent of the party members, who were invited to vote on Saturday, would be expected. He also stated that Basha will stay an MP, but cautioned that because of his troubles with Albanian and Belgian justice, he will continue to occupy this position until the situation is resolved.

The December 11 assembly, however, is not recognized by Basha and the DP leadership. On December 18, they called another assembly and dismissed the heads of the branches who attended Berisha’s assembly. They reported 3 MPs for forging ID documents: Belind Klliçi, Edmond Spaho, and Albana Vokshi, as well as Ivi Kaso and Ervin Minarolli, in the morning.

Despite the large crowd that gathered inside the PD offices, no incident was reported. Mr Berisha, on the other hand, claimed that armed gangs had broken into the headquarters. After accusing his office, as chairman of the FRPD, of being raided, MP Belind Klliçi confirmed this version and declared he had notified the police to perform the verifications.