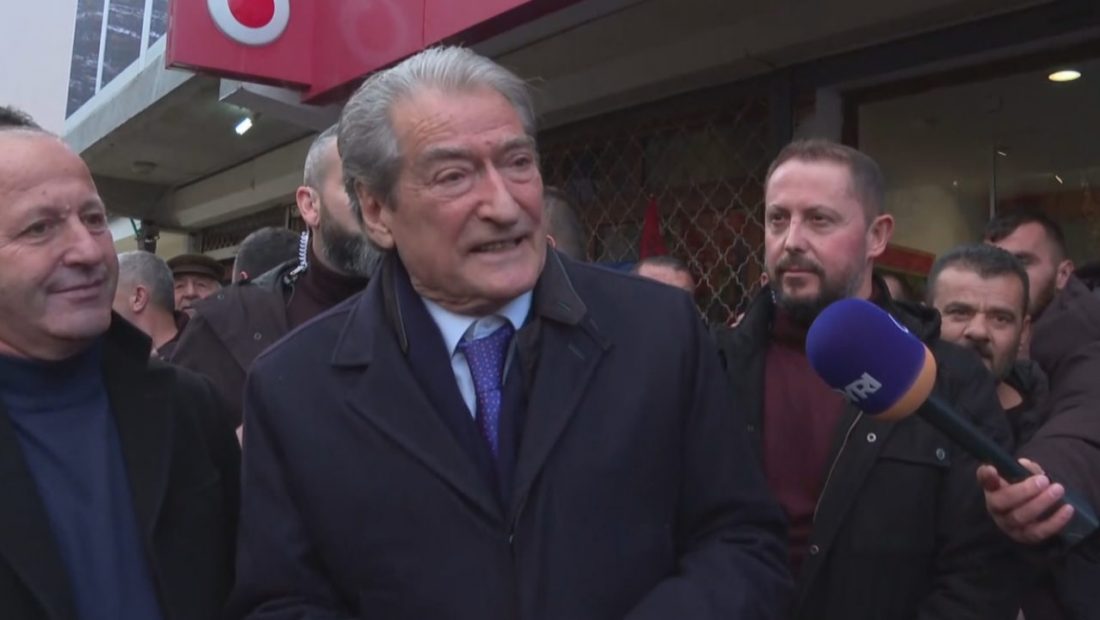 A legend-like journey, half celestial and half terrestrial. Sali Berisha, the former Albanian Prime Minister, described his visit to his birthplace in this way as he sees the meeting with the Tropoja democrats as a crucial milestone for the country. He made harsh accusations against Prime Minister Edi Rama, stating that he had discriminated against Albania’s north for the past eight years. Berisha also has a response for those who accuse him of creating division.

“We have convened here at a pivotal juncture in the country’s history. Albania has marked dark records in the past eight years; from one scandal to another. Northern Albania has experienced more discrimination in the last eight years than it had in the any eight years of each foreign occupation. Edi Rama, a fierce enemy of Albanians, imposed a road tax on the north. This territory is 20 years behind Tirana and has to pay taxes. He imposed a visa to you, despite the fact that Albanians move freely in the entire territory. The north and Kosovo were subjected to this tax as well. I respond to people who accuse me of encouraging division by saying that I am not inciting division, but rather battling it. I am doing everything I can to bring Albanians together. The country has been deserted by its people for the past eight years.”

But Berisha considered the national issue even more dramatic. He makes similar accusations against Prime Minister Rama in this section as well. Rama, he claims, is trying everything he can to submit Albania to Serbian dominance through a Serbo-Russian scheme that encircles Kosovo in enmity.

“The national issue is very serious. Edi Rama, like Enver Hoxha, who was captured by Belgrade, is doing everything he can to subdue Albania through a Serbo-Russian scheme. Kosovo has been encircled by hostility from the “Open Balkans.” Belgradeis at the forefront of this hostility as much as Tirana. Even in meetings, he criticizes the authorities of Kosovo.”

Rama, he claims, has not been able to persuade any country to recognize Kosovo’s independence in his eight years in power, but has backed Slobodan’s accusations against it.

“He was unable to persuade even one single country to recognize Kosovo. With his attacks on Kosovo, he, like his predecessors, has tried to support Slobodan’s accusations.”

Berisha, who views the Open Balkans as a hostile scheme for Albanians, has issued another message to Serbian President Vucic, stating that the “Open Balkans” would not pass to Albania with Rama’s signature at the price of damaging Kosovo. He also appealed Vucic to recognize Serbia’s genocide of Albanians.

“The open Balkans is a project that is opposed to Albanians.  The division of Kosovo, the transformation of Macedonia and Albania into territories of absolute Serbian hegemony are the only goals. Will we agree to them? Never, ever, ever! I’ll send a message to the new Slobodan via this platform: forget it that the Open Balkans could pass in Albania with Edi Rama’s signature! Consider your options carefully. Consider it well several times before entering Tirana as a Rama’s friend, because you will be surrounded by a crowd of people. We are working towards normal relations and will continue to do so, but never at the price of Kosovo. Rama is a threat to Kosovo. Putin kissed and hugged Vuçiç on the day the Albanian parliament applauded the painter’s (Rama) speech for anti-Albanian comments. And they were talking about northern Kosovo, about weaponry and tanks. NATO protects Kosovo, and any of its efforts will reduce the army to skeletons and weaponry to scrap metal. Forget about touching Kosovo. You will never be able to enter any section of its land again. You must acknowledge the cyclical genocide against Albanians in order to cooperate. Edi Rama, on the other hand, promises to sign a customs-free agreement with Serbia, but not with Kosovo.”