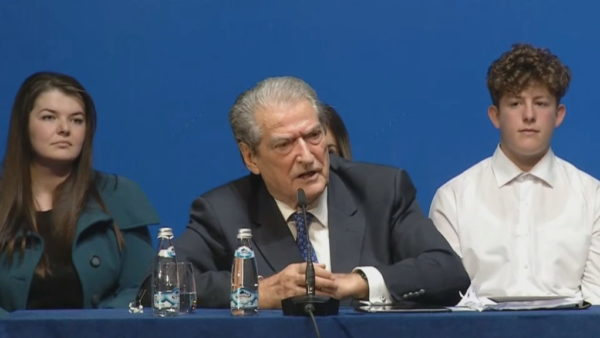 Sali Berisha responded to Lulzim Basha’s accusations that Berisha is linked to the crime during a “Meeting with the Base” in Librazhd, where he was joined by former President Bujar Nishani, the area’s MP, Luciano Boçi, and other Democratic officials. Berisha accused Basha of usurping the DP and reminded him of two cases for which Basha has been accused of: one involving Russian ties and the other involving the” Toyota Yaris” case. Berisha also stated that 5,000 signatures are being collected for the assembly on December 11th.

“He is a western educated individual who is unaware of any moral or legal principles. Today he has in his hands the party law on his own, the statute, and he is breaking every article. The Council and the Assembly do not exist in his eyes. He announced today that he has been invited to visit the United States. Saimir Tahiri visited the White House as well. He takes two large cases with him: the “Muzin” file and the “Toyota Yaris” file. Taulant Balla and he share the latter. For the first time, he departed for the United States three years ago, and a group of Democrats came out to see him, but he did not show up. They warned that if he showed up, he would be detained. For him, the “Muzin” file is a scorcher. The narco-state foundations are being shattered. They are hesitant to verify the signatures because they believe those who attend “Meeting with the Base” to be “scum.” Hostage Basha talked about my ties to organized crime and those of the “Meetings with the Base.” Suel Çela has been the target of my accusations more than anyone else. Go to Lulzim Basha’s Facebook page and you’ll see that he never mentions him. Look through the tabs of our chats to see where he requested that I not mention his name. He’s down to slander and anger now. They’re on their way to collecting 5000 signatures, not just 4200.  Why don’t we make them public? The first is because it is the data legislation, a Constitutional clause governing the protection of personal data. They are terrified of the signatures,” Berisha explained.

Berisha also referenced the protests this time, warning that the squares will be packed with people opposing Rama.

Lulzim Basha, the Democratic Party’s leader, reacted quickly as well. ” Berisha recycles Rama’s attacks”, he writes on Twitter, “but he can’t keep the DP in bunkers for personal reasons.

“I’m sorry Sali Berisha stooped so low,” Basha said, “repeating Edi Rama’s attacks. Sali Berisha will not use the PD for his own personal gain by fabricating things. The DP has always been and will always be a US ally, and no one can use it as a shield for personal gain!” Basha wrote.