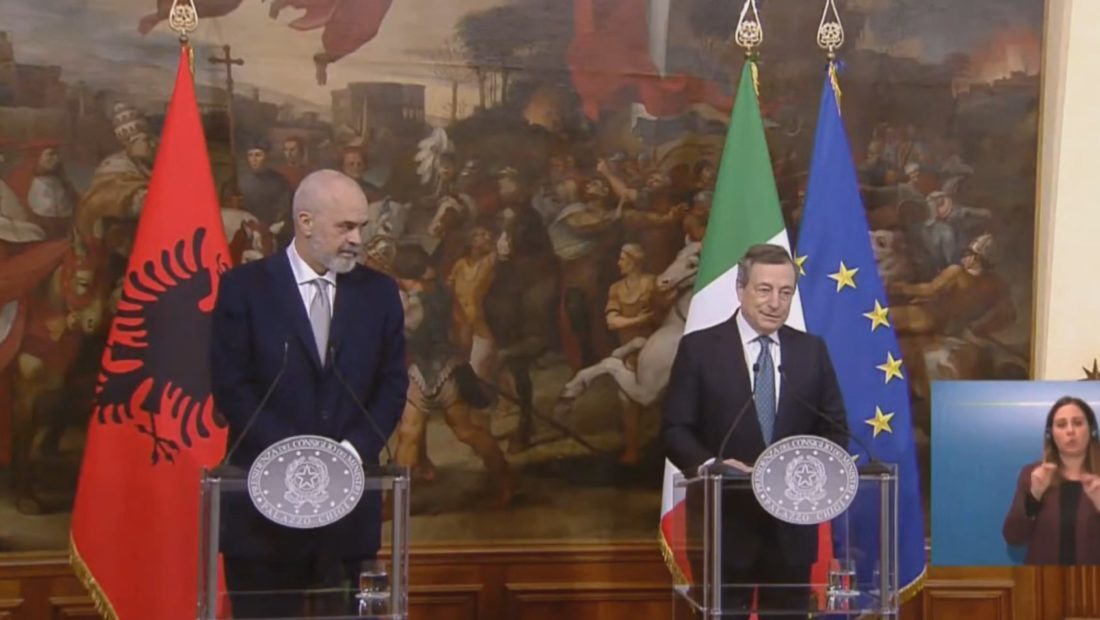 This Wednesday, Italy’s Prime Minister, Mario Draghi, met with his Albanian coutnerpart, Edi Rama, in a meeting that was followed by a press release.

Draghi emphasized the strong relations that exist between Albania and Italy, thanking the Albanian Prime Minister once again for his solidarity throughout the pandemic’s terrible period, and stating that Italy’s support for Albania will continue to be strong.

“We had previously met but had not had the opportunity to speak face to face. I wanted to express my gratitude to Rama for Albania’s solidarity with Italy during the pandemic’s deadliest days. There are no words to describe how strong our bond is.

“Italy is actively monitoring Albania’s EU accession process. This is how Italy will continue to support Albania. The judiciary and security collaboration is also proceeding very well, as we discussed today. I can assure you that Italy will provide Albania with full support,” Draghi stated.

Prime Minister Edi Rama, in the joint press conference with his counterpart Dragi, reacted to the problem of European integration and the challenges facing Balkan countries.

According to the head of government, Europe is the only “entity” on the map with both an internal and exterior border. Everything that happens in the Western Balkans, he claims, has an instant impact on Europe.

“Every event in the Balkans has a direct impact on Europe. To summarize, the EU is the only entity that has both internal and external borders. Because there are so many Albanians working in Italy, I requested the Prime Minister to accelerate the process of acknowledging retirement benefots. We discussed security and justice, and we now have the potential to build projects that would encourage more young people to attend school, such as the Italian magistrates’ or police’s school. Italy has played a critical role in the transition from a tyrannical system to a functioning democracy, and there are no words to adequately express our gratitude to this country. And that no matter who has been in authority, Italy has never changed its stance regarding Albanians. Not only are there numerous Albanians in Italy now, but there are also many Italians in Albania. We need to discover ways to build our bonds with one other. I also hope that the Prime Minister will be able to visit Albania “, stated the Prime Minister, among other things.