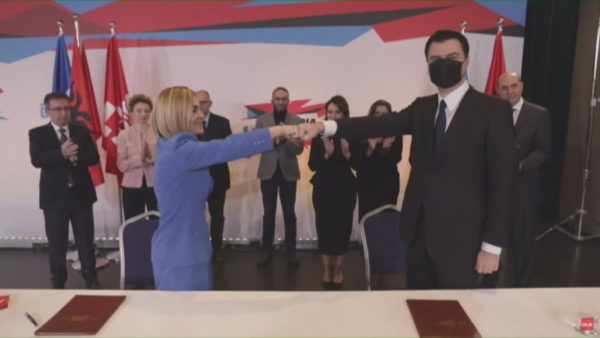 Months of quiet hostility have come to an end between the two main opposition parties, which are now openly blaming each other for the election’s loss and the failed plans that led to it.

It all began when the Democratic Party’s General Secretary, Gazment Bardhi, revealed that the SMI had declined 15 assured seats on the combined list with the Democrats.

“The Democratic Party has offered the SMI 15 seats, but the SMI has stated that they will receive 34. When I told them that you don’t get a mandate in Elbasan, they told me that we get three and they get two “Bardhi stated in an interview.

The SMI leader was not impressed with Gazment Bardhi’s comments, and she not only declined the offer but also accused Basha of defrauding them with the guarantees he had provided for renouncing the parliamentary seats.

“Among the list of lies, besides the one that Chancellor Merkel and the EPP would endorse them for renouncing the parliamentary seats, has been publicly added to the newest one with the 15 mandates that have been offered. A twisted lie that transcends all human boundaries and serves only to Rama and his shadow “, Kryemadhi reacted.

Elona Guri, an SMI candidate in the recent elections who is recognized as one of Ilir Meta’s and Monika Kryemadhi’s closest associates, concentrated her response on the district of Elbasan, where the DP’s second person in charge was a political figure.

“Monika Kryemadhi confronted you with Lulzim Basha, the Israeli advisor, and Petrit Vasili, in Basha’s office, explaining to them how you had offered to give eight seats in Elbasan. You wanted the SMI votes and you had promised the gangs that you would be the interior Minister. You also record your conversation. You have the registration there, how you declined to arrange a press conference against Suel Cela,” Guri declared.

Guri’s statement was ignored by Bardhi.

“I have no idea who we are talking about. I’ve delivered dozens of press releasaes. The SMI did not receive a mandate because they chose to hide and did not come to Elbasan. You are aware that the SMI has not run a campaign in Elbasan,” the Democratic secretary stated.

Petrit Vasili, the SMI’s deputy leader, reiterated the accusations of betrayal. Vasili accused the Democratic Party’s leader of secret cooperation with Edi Rama and even deemed him a Prime Minister’s hostage, a label used against Basha by Sali Berisha.