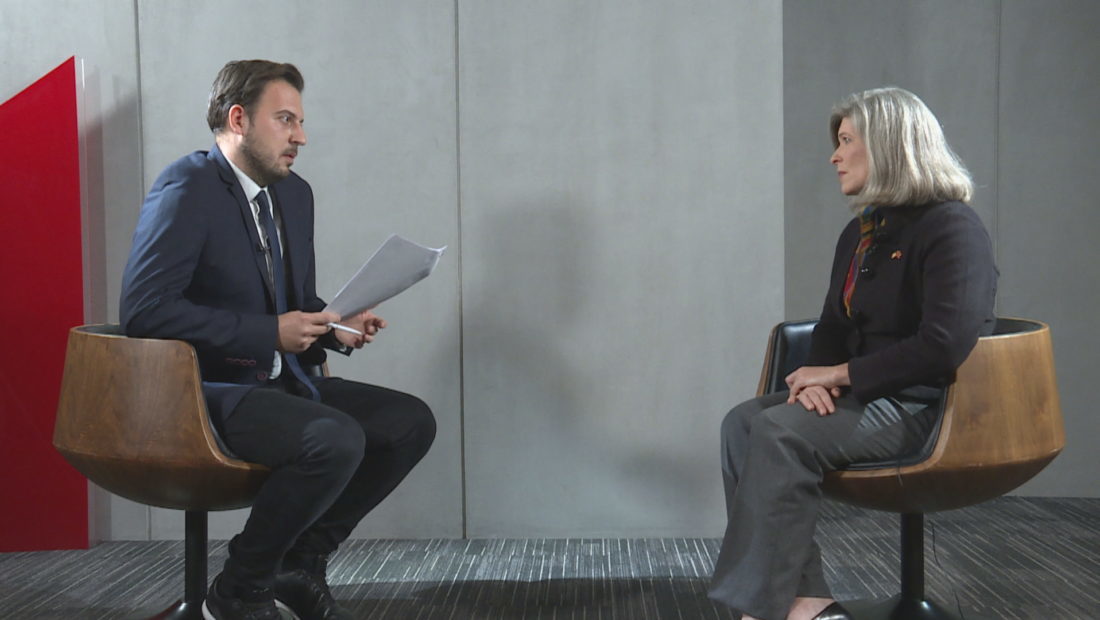 “The fight against corruption, regardless of where it originates, is critical.” Senator Joni Ernst of the United States commented on the former Prime Minister of Albania, Sali Berisha, being declared “non grata” by the US State Department.

In an interview with A2 CNN, she stated that in the face of inappropriate Russian and Chinese influences, cooperation between the US and Albania should be reinforced. Albania’s aid in the Afghan conflict was praised by the Republican senator in this interview with A2 CNN journalist Ervin Koçi.

Senator Ernst thank you for accepting the invitation for this interview. A visit of a U.S Senator is big news in Albania. What’s on your Agenda?

The agenda is very simple and I’m so glad to be here. The hospitality has been extraordinary by the government of Albania and the people of Albania. First, it was very important to me to visit the Afghan evacuees that are being hosted by Albania and to see that they were doing well, and to answer questions that the evacuees had. So, again, we’re very very thankful there, but then also to encourage military cooperation as well as economic cooperation with Albania. All of these things are extremely important.

Since August, Albania has joined the list of countries that are hosting the Afghan refugees in solidarity with the United States and as a NATO member. During your visit to Shëngjin, what did you find out, do refugees prefer to stay in Albania, or do they want to move to the US?

For the last 30 years, Albania has relied on the alliance with the United States of America, as our strategic partner. How do you as a senator see these relations, is there room for further strengthening? I ask this question because every time we are at a crossroads, it is a voice from the United States that puts an end to the crisis in our country, which is usually a political crisis?

I hope that we continue to stay very strongly strategically tied and again that was why it was important as a United States senator to show my support to Albania to thank you for the extraordinary hospitality that’s been shown to our Afghan partners but also to encourage further development of this relationship, not just militarily, which I think is extremely important, but also through business ties as well.  Development within the energy sector is Important. We’ve seen movement from companies within the United States and Albania working together. So it’s important that we continue with this alliance because we see undue influence coming from China, coming from Russia, and it is important that we remain tied closely together and I would encourage that.

A question about the political situation in Albania. In May, the US Secretary of State publicly declared non grata former Albanian Prime Minister Sali Berisha, who has sued Mr. Blinken in a Paris Court, claiming there is no evidence forth the charges against him. At the same time, the main opposition force is in crisis as Berisha demands the removal of Lulzim Basha after his expulsion from the parliamentary group, and taking the leadership of the party he founded 30 years ago. How would you comment on this development?

I think it is very difficult right now in the political spectrum in Albania. All you have to do is look to the United States to see that we have political divisions as well, but through the divisions that are within our parties, in the United States of America, we have found ways to work together and it’s important we figure out what binds us together as a nation and as political parties rather than continuing to separate. I would encourage that as a solution coming from the United States. Is to defer corruption out wherever corruption may be. We are very much against corruption but also find ways as parties that you can come together in Albania for the good of the Albanian People. I think that is extremely important. We will always have different policy points of view, but the important part is to find what binds us together, will help move us ahead in the right direction, the direction where your country was founded 30 years ago. I think it’s important that we continue to work on those issues together as the United States and as Albania.

A question about the situation in the Western Balkans. We are seeing a growing crisis in Bosnia, while Serbia and Kosovo have not yet reached a final agreement between the two countries. What can this region do to achieve the goal of membership in the European Union?

Mrs. Senator, thank you for the interview

Absolutely, and thanks again to your people for being so hospitable and wonderful partners to the United States of America.