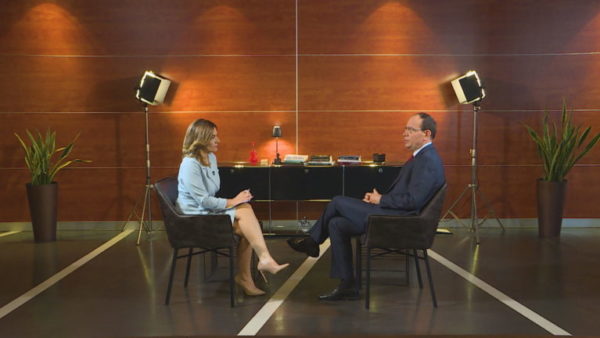 The former president sees the meeting of the National Assembly scheduled by former Democratic Party leader Sali Berisha as the only chance to bring reform to the Democratic Party. In an interview with Merita Haklaj, he claims that, following the crisis in the DP caused by a political model that violates institutions, this is the appropriate course of action.

“Every person has the freedom to hold his or her own opinions. It’s the only way to make a difference in the situation. There was no other option for changing the DP. Nobody can doubt that the DP is in a serious state of crisis. It resulted in a terrible electoral outcome. It came without idea, and the dividing processes persisted. Exclusion has been shown to be a political model that breaches the institutions and codes of the country. We’ve arrived at a point when the DP is in trouble.  The second step in the recovery process is to respond to the crisis.”

According to Nishani, resolving the problem in the DP through the forums was impossible due to Basha’s control of decision-making mechanisms. The party’s sole hope of regaining control was to return to the base. According to him, the current leader’s political culture has led the DP to failure after failure.

Nishani uses the example of Sali Berisha’s suspension by the parliamentary group, claiming that no DP institution reacted because Basha has monocratic power.

Nishani refutes the comments of the Democratic Party’s secretary, Gazmet Bardhi, and claims that there is no formal obstacle to the National Assembly meeting if a quarter of the delegates demand it.

Some statute and program amendments will be made in the National Assembly, which Berisha convened on December 11 and which Nishani claims are in the function of the DP for the next electoral race.

On “Interview” with Merita Haklaj, Bujar Nishani stated that the Democratic Party’s National Assembly, in addition to the decisions it can make on the statute, “will have to delegate democracy to the party even more, to delegate it to membership by providing for the organization of a referendum, where perhaps these National Assembly decisions will be ratified.

“The Democratic Party’s leadership is one of the most significant areas of reform that the party must address. Lulzim Basha, the party’s leader, is charged with political and institutional responsibilities by the reality. The DP should reflect on this reality, and the best way to do so, in my opinion, is through a referendum, especially because the DP’s leader was chosen with “one member, one vote.” It is up to the members of the PD to decide how they want to form their own party, including what program, statute, and leader they want “, Nishani stated.

Why hasn’t the DP been able to come up with a credible figure in these years? Nishani explains

When asked why the Democratic Party has been unable to establish a credible figure for movement and change in the eight years since Sali Berisha’s election, former President Bujar Nishani says it all comes down to credibility and integrity. He demonstrates the disparity between the two leaders Berisha and Basha in his conversation with Merita Haklaj.

According to Nishani, a movement is being asked in the DP to modify the political waters through forums, as the Council’s Presidency has not demonstrated the authority or competency to carry out such a process thus far, and the membership has only one forum, the National Assembly.

The DP has lost its ability to be a viable government alternative, is in grave trouble, and needs to transform in every way. This is what Bujar Nishani, the former president of the country and former head of the Democratic Party’s National Council, said in an interview with Merita Haklaj, in which he described the options for dealing with the situation.

“As a political entity, as a political system’s mechanism, and as a guarantor of society’s ability to oversee the government and allow it to exit, the situation in the DP is concerning.”

The DP should not only not fail to agree, but it has also lost its electoral political influence and is suffering from an identity problem.”

According to Nishani, in order to return to the ruling alternative, the Democratic Party must develop its philosophy and political program inside its procedures.

Lulzim Basha, the Democratic Party’s leader, coined the term “Bermuda Triangle” in the Assembly to refer to people he sees as “previous leaders of the Albanian transition,” such as Edi Rama and Ilir Meta, as well as Sali Berisha himself.

However, former president of the country Bujar Nishani believes that including the historical leader of the Democratic Party in that title is absurd. “The subject of articulation with other political forces does not interest me because the Democratic Party is currently dealing with its own issues. However, Mr. Berisha’s link with previous evil clearly implicates Mr. Basha. “For the vast majority of Berisha’s time as a decision-maker in the country, Basha was part of him,” argues Nishani.

Is this, however, a strategic win for the prime minister, who persuaded the electorate during the campaign that Basha’s return to power would mean the return of Berisha and Meta? On this issue, according to Nishani, we must accept either that Rama won the election because he addressed the electorate to the “gogols” Berisha and Meta, or that he stole the votes, committed an electoral massacre, and the opposition was too weak to respond. If there are more factors, there should be a mechanism to measure them. I don’t believe Berisha was exposed throughout the campaign. “I believe Basha failed to gain the trust of non-traditional DP voters.”

Nishani criticizes Basha, claiming that he has shown “incompetence and lack of political intuition, as well as a lack of teamwork, without counting the inability to extend the base,” all of which have resulted in failures, according to him.”

Is this, however, a case of incapacity or even deliberate strategy? “I may have hypotheses, but they would come with a dose of speculation,” Nishani hints. I can categorically state that he has demonstrated complete ineptitude, as well as a problem with honesty and the faith that colleagues, allies, and the electorate place in him. For the purposes of filing charges, I have the right to do so because the burning of mandates prompted Rama to amend the Constitution and electoral system, and the boycott of local elections gave Rama complete control of the territory”, Nishani declared.