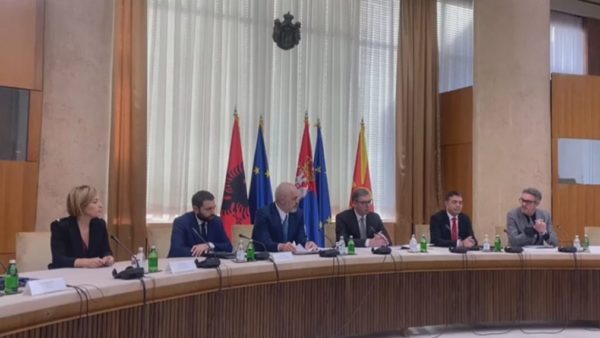 The three Western Balkan leaders issued a joint statement at the “Open Balkan” meeting in Belgrade, that has been made public.

“Today’s world is fast changing. It’s past time to take significant action. Missed chances, complacency, and a lack of desire to realize a strategic vision cannot and will not be forgiven. If we want to obtain the finest results, we must first gain a greater understanding of one another. If somebody thinks we should act now, that time has passed. As a result, we underscored today the decision to increase economic cooperation in the context of the ‘Open Balkans’ initiative, building on the Berlin Process agenda and focusing on swift and tailored implementation,” according to the statement.

A view from the region on the future of enlargement

At the Brdo Summit on October 6, the EU and its member states, as well as regional allies, underlined their unequivocal support for the Western Balkans viewpoint.

The Western Balkans emphasized the importance of democracy, fundamental rights, and the rule of law, as well as the region’s commitment to European principles and democratic norms. However, the EU’s problematic capacity to integrate new members, internal EU member state debates, and bilateral relations have hampered the region’s significant progress toward EU membership.

On paper, the enlargement policy is still in effect. In actuality, however, citizens in the region are becoming increasingly frustrated with the EU stance. Furthermore, the region has paid a significant price for delays in its EU aspirations. The failure of the European Union to keep its commitments may be seen in Northern Macedonia.

Northern Macedonia’s government made enormous efforts to meet Brussels’ requirements, but instead found itself isolated and left to deal with the consequences of EU choices. The deteriorating perspective for European integration threatens to leave us more fragmented than ever before. This is a feeling that dominates the entire region.

While the EU is working on new, far-reaching plans, the area is frantically trying to put existing ones into action. We are committed to meeting EU standards and closing the economic gap with the EU, despite the fact that our journey to the EU is not advancing at the planned pace.

We cannot allow the region’s future and well-being to be jeopardized as a result of this downward spiral. The EU is progressing, while the region is stuck in the EU’s own problems.

Along with its promises to phased enlargement, as foreseen in the new framework, the EU must examine all paths for advancing the integration of the Western Balkans in the run-up to membership. As a result, involving the region in the development of EU trade and tax policies, such as the carbon limit adjustment mechanism and steel guarantees, to name a few examples, would be beneficial. We can also look into whether the Western Balkans should be excluded from certain “erga omnes” trade policy measures. Our universities might be included in the EU Higher Education and Research Area, giving them an equal opportunity to participate in EU specialized, research, and innovation programs. Our agriculture, on the other hand, is in desperate need of investment, despite the fact that it has enormous potential to expand and offer high-quality products to the EU market.

This will have a positive impact on the region’s stabilization and economic success. We believe that assisting and promoting a region of confidence and development is in the EU’s best interests. We can also look into Schengen membership and gradual integration into the EU common market as a group.

Today’s world is fast changing. It’s past time to take significant action. Missed chances, complacency, and a lack of desire to realize a strategic vision cannot and will not be forgiven. If we want to obtain the finest results, we must first gain a greater understanding of one another. If anyone believes we should act now, they are mistaken. Now was yesterday. As a result, we are highlighting today the decision to enhance economic cooperation in the framework of the “Open Balkans” initiative, concentrating on swift and targeted implementation and building on the Berlin Process’ agenda. We’ve enlisted the help of the Chambers of Commerce and asked them to put together a thorough Roadmap for implementing the Memorandum of Understanding on Import and Export Facilitation in the Western Balkans, which was signed on July 29 in Skopje. Today, we approved the Roadmap for the Implementation of Trade Facilitation Measures and asked the CIF to continue to oversee the process.

Additionally, we have established an Inter-Ministerial Council that will collaborate closely with the Chambers to carry out these initiatives.

We extend an invitation and a warm welcome to everyone else in the region. The “Open Balkans” is now open.