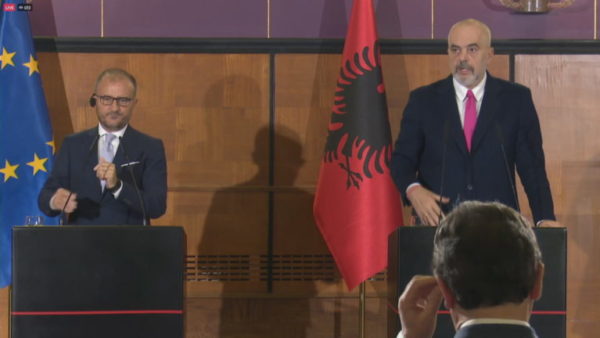 Albania has achieved progress in reforms, according to the European Commission’s most recent progress report, but there has been little development in terms of integration.

Journalists asked the EU Ambassador in Tirana what Albania could do to get a seat at the first intergovernmental conference. He emphasized that now is the moment for the EU to follow through on its commitments.

“I believe that integration occurs over time, and Albania is integrating into the EU on a daily basis, thanks to fruitful exchanges on the side of EU financial aid.”

“For the next steps, I was very clear that Albania has delivered results, and now is the time for the EU to deliver on its promise, so member states must read the report and find the strength to overcome those bilateral issues so that Albania and Northern Macedonia can sit at the table,” he said.

In the meantime, Prime Minister Rama emphasized that Albania has achieved results, but the EU has failed to do so.

“The word ‘result’ has an important nuance that should be emphasized. Albania, in fact, has accomplished the results it should have at this point; it is the EU that is failing to accomplish results. Albania’s achievements are detailed in the report. If we continue with the reforms, the European Council, which is the only impartial judge in this process, should do so as well. If we continue to make progress, we don’t make it so that we have to take an exam; instead, make it so that we can stay here and help Albania improve,” Rama declared.

During the meeting with Prime Minister Edi Rama, EU Ambassador Luigi Soreca stated repeatedly that Albania has met all of the requirements for the First Intergovernmental Conference on Integration to be held.

The EU diplomat added during his remarks at the handover ceremony of the European Commission progress report that the report highlights Albania’s achievements in the areas of justice reform, vetting law, and the fight against organized crime and corruption.

Soreca emphasized that the report’s main concern is freedom of expression, and that the media law should incorporate all of the Venice Commission’s recommendations.

“The yearly report is based on a new methodology and, in my opinion, provides a fair assessment of Albania’s progress toward EU membership. The merits are recognized, and so are the areas where progress has been lacking. Despite the challenges presented by the epidemic, Albania has continued to make progress on EU-related reforms, according to the report. Albania has met all of the requirements, according to the report. Before the end of the year, the first conference must be held. Work is being done to resolve bilateral concerns. Delays in the formal start of accession negotiations will harm the EU’s credibility. The report reveals that the Justice Reform and the Vetting Law have yielded outcomes in the area of rule of law. Albania has also made significant progress in the fight against organized crime and corruption, with the establishment of new law enforcement agencies.

“Work on reforming the rule of law must continue. Albania has once again aligned itself with EU foreign and security policy. The issue at hand is freedom of expression. Journalists should not be subjected to verbal abuse. The media law must be in accordance with the Venice Commission’s recommendations. Minorities are another concern. It is necessary to pass legislation in this field, as well as to regulate the property registration and expropriation procedure. The Commission believes that the first intergovernmental conference should take place before the end of the year “, Ambassador Soreca stated.

Rama receives EU progress report: Albania has met all of the conditions, according to the EC

Prime Minister Rama received the European Commission’s progress report on the path to EU integration from the EU Ambassador, Luigi Soreca, on Wednesday.

“Not just for his presence, but also for the excellent and tireless work of the entire EU delegation in Albania, I would like to express my gratitude to Ambassador Soreca. It is critical to recognize that, beyond membership, this is an internal process that is required in order to build a state that complies to all norms and standards.

“The report we are receiving today is the latest in a series of reports in which the Commission reiterates its belief that Albania has completed all of the conditions necessary to formally launch what was previously determined in the European Council and to begin accession negotiations with the EU. I also want to highlight something I’ve said many times before: the European Commission is a fair and rigorous partner that assesses progress based on field research. As a result, there is no comparable institution in any of the member states’ capitals that can compete in terms of research quality with the European Commission delegation in our country. Whereas when we hear near the deadlines of EU decision-making, some countries raising claims: Wait, you need this as well, you need that one too! These are political moves. As a result, the progress report serves as a guideline. All others are interfering with a political process.

The study objectively certifies that Albania emerged through an incontrovertible electoral process that met OSCE requirements, and that Albania has continued to make progress on crucial reforms “, Rama stated.

Opposition: The government should abandon imaginary foreign enemies and commit to meeting the standards

After receiving the progress report from the European Union’s Ambassador, Luigi Soreca, the President of the National Integration Council, Jorida Tabaku, stated that Albania is not ready to begin negotiations.

The government, according to the Democratic MP, should abandon its imagined enemies and commit to meeting the standards.

“Democracy, economic prosperity, and human rights are all declining. We cannot fabricate a war or non-existent hostility with external factors while making little or no progress in the important areas in the last eight years “Tabaku remarked.

Tabaku also noted some of the conclusions of the progress report that need to be addressed in the future, adding that the majority should demonstrate its commitment to European values by actions.

“For me, the European value is not stealing the personal data of 900,000 Albanians and then setting up a national patronage system, which was flogged as a state-party merger in the ODIHR report. Any government with even a semblance of democracy would not debate using money to buy votes, as the OSCE-ODIHR report claims. Especially today, when we see prime ministers resigning for far less “, commented Tabaku.