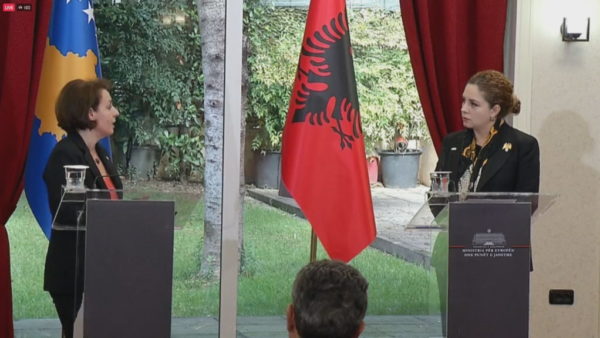 Albania will not abandon “Open Balkan” or its expectations for Kosovo’s participation in the initiative. Olta Xhaçka, the Minister of Foreign Affairs, did not hesitate to ask her visiting counterpart from Prishtina, Donika Gërvalla, to participate in regional projects.

“We committed to fully implementing the agreement between the two Foreign Ministries on strategic cooperation in foreign policy, through the harmonization of actions and diplomacy, in order to achieve national strategic objectives. Kosovo’s membership in regional initiatives and international organizations remains the top priority. Albania will always be on Kosovo’s side,” Xhaçka stated.

In response, Gërvalla updated Xhaçka about the problems in northern Kosovo, while also requesting to coordinate their approaches to Serbia.

“We need to talk about things that are concerning us, just like any other large family. The language of our northern neighbor, Serbia, has become increasingly harsh in recent months, as everyone has noticed. We must use caution in order to maintain peace. Greater cooperation is required from regional countries regarding Serbia .”

Gërvalla spoke about the Berlin process instead of Open Balkan.

“We are in talks to negotiate regional accords, and we believe that Albania and Kosovo will be able to move forward with these agreements if they take an open attitude to the Berlin Process.”

Gërvalla continued her agenda at the Democratic Party headquarters, where she was received by DP leader Lulzim Basha.